PlatinumZealot wrote: ↑
Sun Oct 16, 2022 5:24 pm
So Honda has won two championships, and soon to be three, in the hybrid era. Who would have expected that?

They have the Power of Dreams (TM) of course.

Depends how that falls under the budget cap rules I guess. RBPT was a clever attempt at getting costs excluded that didn't work out, so perhaps it'll be folded and Honda will return.
Top

Are Honda and Porsche coming?

GP ABU DHABI 2022 The engine manufacturers' registration for 2026 is slowly gaining momentum. After Audi, Mercedes and Red Bull Powertrains have signed up. Renault will follow next week. Honda and Porsche could sign up on suspicion. Only Ferrari is hesitating.

Two deadlines have already passed. At the first one on 15 October, only Audi had signed up for the new engine formula from 2026. In Abu Dhabi, FIA President Mohammed bin Sulayem proudly announced: "Two more have signed up. And the others will follow." Mercedes and RB Powertrains confirmed a day later that they were on board.

With the second enrolment deadline also having passed on 15 November, bin Sulayem explained that the expiry date is fluid. It is a complex set of rules that all parties would have to study carefully first. Renault has studied carefully. Alpine boss Laurent Rossi announced that Renault would sign up in the next two weeks, after some legal question marks had been resolved.

Ferrari is not ready yet. Maranello sees the need for renegotiations not only on some financial issues like the increased entry fee and the price for customer engines. Ferrari worries whether the FIA can fairly control the budget cap for all, how new entrants will be favoured and what status RB Powertrains will get if Red Bull's new engine factory allies with a manufacturer later on.

At the moment, RB Powertrains is considered a 90 per cent newcomer, which also benefits 90 per cent from the bonus designed to lure new manufacturers into Formula One. That's more budget in the three years of preparation before 2026, and a temporary bonus of dyno hours has been blocked by the established engine manufacturers. Ferrari wants to know what happens if Red Bull makes common cause with Honda for 2026. Then the rookie status will no longer apply.

Rumours in the paddock suggest Red Bull could team up with Ford.

Honda is expected to sign up for the engine formula from 2026. We may find out what the Japanese plans are as early as the big title celebration in Motegi in a week's time. The word in the paddock is that Honda will sign up separately and not enter into a joint venture with RB Powertrains, but will develop the complete powertrain in-house and then return with another team.

Nevertheless, RB Powertrains remains an interesting partner for car companies. In Milton Keynes there is a functioning engine factory with 300 engineers and mechanics, and the prototype of the combustion engine is already running on the test bench. Sporting director Helmut Marko recently hinted that there were other interested parties for a cooperation besides Honda. In the meantime, a clear favourite has apparently emerged. It is said to be Ford.

FIA and F1 management are encouraging Porsche to do the same as Honda. Sign up on spec to get their foot in the door in 2026. Porsche wanted to explore other options after Red Bull's cancellation. For Hyundai, Formula 1 comes too soon. The Koreans can still enter in 2027. The enrolment period for this expires on 30 June 202
Top

So, who do Honda return with?
The obvious 'best option' would be if they can by out, or buy into AT, if it is for sale as they have long standing connections and fit well.
Other than that, the best option once again looks like Mclaren?
When arguing with a fool, be sure the other person is not doing the same thing.
Top

I understand Honda wanting to do their own thing, but it's absolutely crazy to come back, unless they plan to operate their own team. There aren't any customer teams on the grid who they could rely on to do the job on the chassis side. They have to do it themselves, or go back to Red Bull.
Top

Agree, they are better off working with a customer team who can work on the chassis and Honda just focus on the PU side. Last time they tried doing it as BAR-Honda, to mixed results.
Top

Honda really wants to build the new PU together with RBPT, but they would prefer to have their own team as well.
That is the point that Helmut Marko is still negotiating. He is going back to Japan end of this week, he told Servus TV.
The Power of Honda!
Top

EDIT: Honda says the Thanks Day is in Montegi and YT says it is in Suzuka.

I think Honda is right.

One of the biggest events for Honda fans will be back. Honda Racing THANKS DAY 2022 will be held on this weekend in Suzuka. Japanese all-star riders and drivers including All-Japan champions will attend and perform show runnings in the front of their fans.

Max Verstappen is not quite finished in 2022. Indeed, he will still be in action at the end of this month
at the Honda Racing Thanks Day in Japan. [27 Nov]

So will Max Verstappen in his Red Bull Racing car. Verstappen is not alone, as Sergio Perez, Pierre Gasly and Yuki Tsunoda are also present in Japan for the demo run. It will be Gasly's last trick for the Red Bull family before he makes his final move to Alpine.

FromGP2toWDC wrote: ↑
Thu Nov 24, 2022 11:31 am
Agree, they are better off working with a customer team who can work on the chassis and Honda just focus on the PU side. Last time they tried doing it as BAR-Honda, to mixed results.

They built a title winning car, they just decided to pull out of the sport before the season in which it won both titles.
Top

A rehearsal was held today on a soaking wet track. 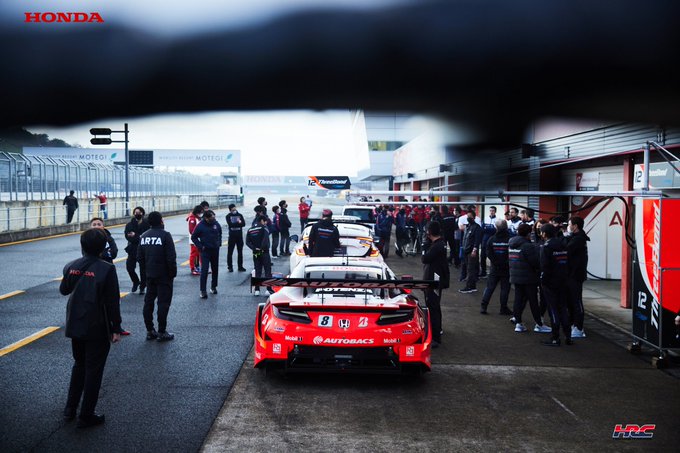 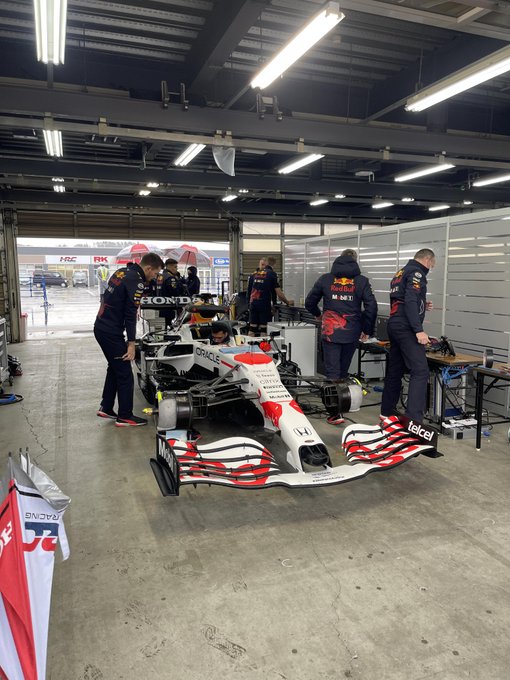 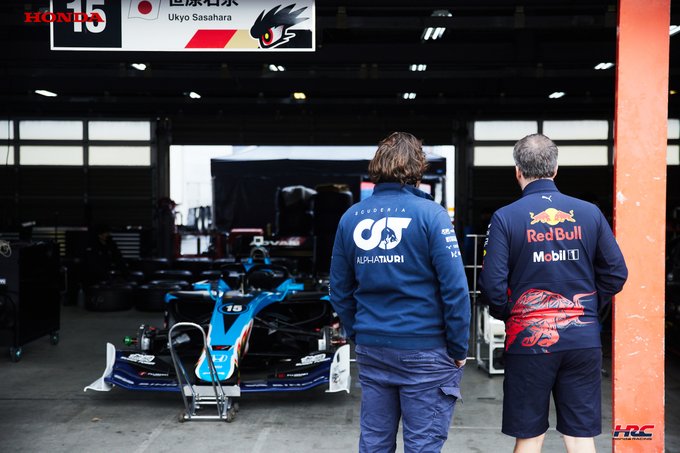 Well, today the sky was blue and it was a great event in Motegi!
.

DAY 2022 will be held at Resort Motegi

for the first time in three years.
Athletes active in motorcycles, cars, home and abroad gather 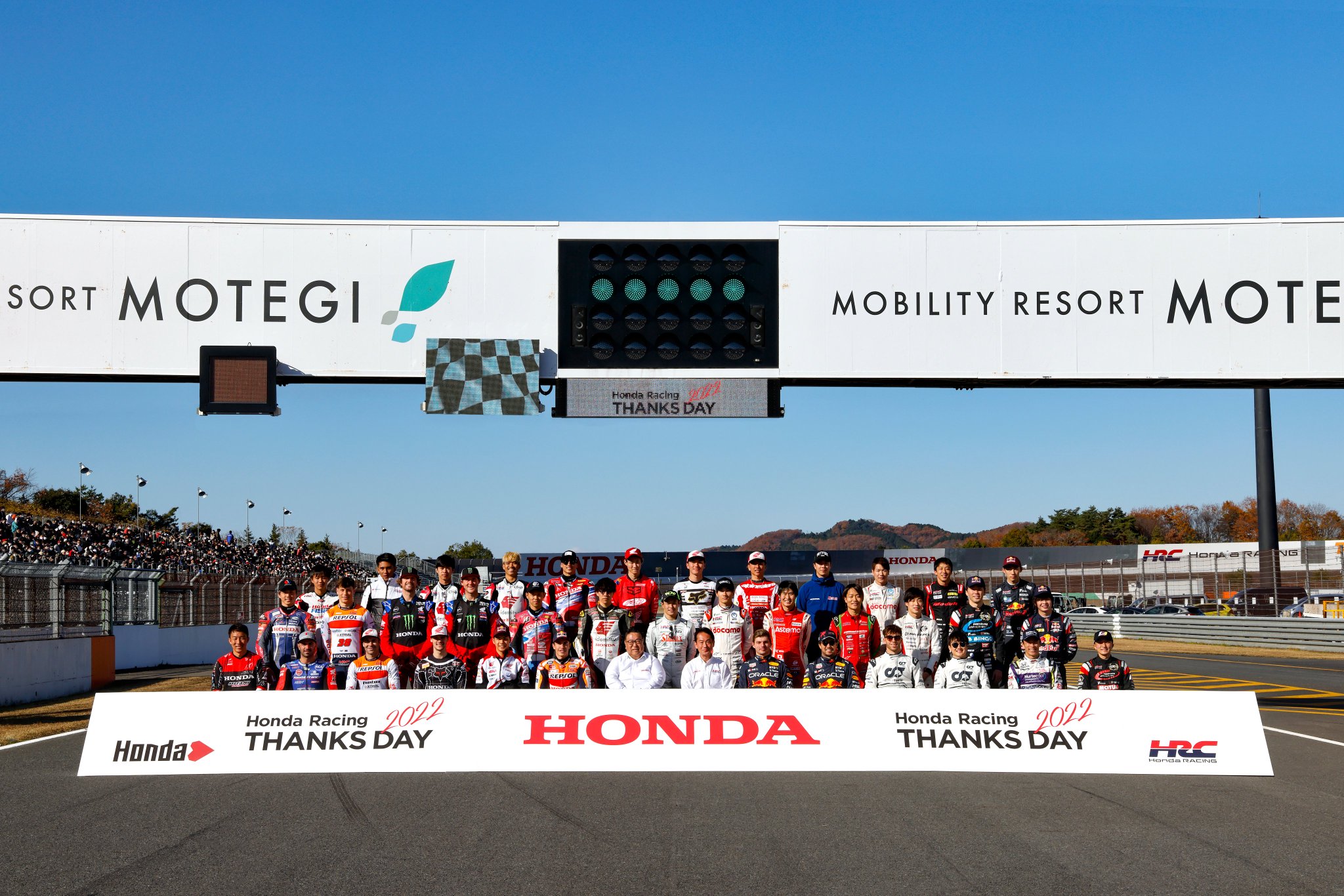 Checo and Pierre and Marc Marquez and Tetsuta Nagashima 🏎 and 🏍 together on track. 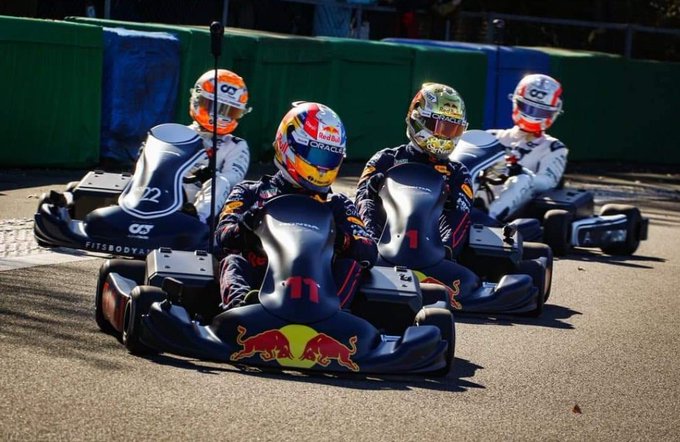 The interviews after the demo's.

An interview with Max earlier today. He recieved a very nice Honda car!

Marc Marquez and Verstappen team up in a go-karts race

Stars of two and four wheels to the track in a race for glory in go-karts!

Who will come out on top?

Among the 16 drivers are also Yuki, Checko and Gasly.

More from Honda Racing Thanks Day
.

HondaRacingHRC
9 dec 2022
Sashimi - It's Raw Cut. The new behind the scenes series from the Repsol Honda Team, a raw and real look at what happens.

Join Marc Marquez and the Repsol Honda Team as they attend Honda Racing Thanks Day in Japan. From testing Mick Doohan's Honda NSR500 to show Pierre Gasly, Sergio Perez and Max Verstappen his MotoGP bike - it was an action packed day for Marc.

Then there's the legendary Honda Kart Race where Max and Marc team up against Honda's biggest stars. Come and have a slice.

Wouter wrote: ↑
Thu Nov 24, 2022 11:59 am
Honda really wants to build the new PU together with RBPT, but they would prefer to have their own team as well.
That is the point that Helmut Marko is still negotiating. He is going back to Japan end of this week, he told Servus TV.

redbull should just do their own thing and live other car manufacture alone they never being too keen to share credits with anyone when they are winning ,Renaults blown diffuser help them a lot,they were stuck as third best team until Honda gave them the pu.merc was loosing 0.6 tenth on straight in abudhabi that because of good ers deployment as lewis has already iterated that they are lacking.when straights are shorter like in zandvoort and Brazil merc have a genuine chance of winning.Rbr just want to use others to get ahead
Top
4062 posts