Exhaust energy use 2011 (without FFE)

Here are our CFD links and discussions about aerodynamics, suspension, driver safety and tyres. Please stick to F1 on this forum.
62 posts

Sayshina wrote: You'd lose tons of energy while you were still in the exhaust, and losing that energy inside the sidepod effectively transfers it to the cooling system.

This one already solved: 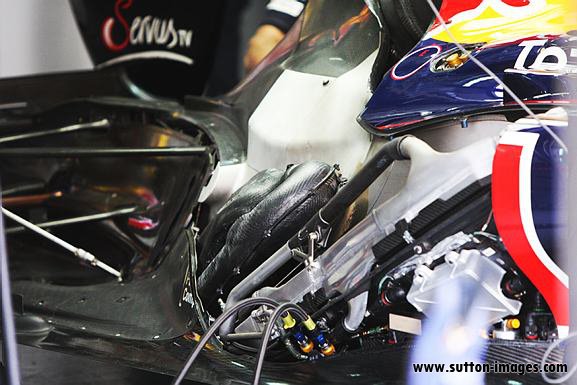 Do you mean that retarded ignitio means injecting fuel in the exahust pipes as in an afterburner? I thought it was abot changing the timing of the usual injectors
twitter: @armchair_aero
Top

and you were the one saying exhuast temp is just 600 degrees C?

concerning the mclaren exhuast it may not be a plenum at all. It's possible just another header but made out of the floor to distribute the exhaust in more than 2 places.
For Sure!!
Top

Do you mean that retarded ignitio means injecting fuel in the exahust pipes as in an afterburner? I thought it was abot changing the timing of the usual injectors

AFAIK RI in F1 is injecting the fuel without ignition (spark), so fuel is ignited in contact with very hot pipe after exhaust port opens. You can also ignite the fuel inside cylinder, but much later then usual. In both cases exhaust will be much hotter (no energy to pistons and cooling).
Top

What is you deifintion of plenum? I have used the word plenum to indicate a chamber big enough for the flow to stanilize in pressure, but maybe sayshina and ringo you have something more specific and exhaust related in mind?
twitter: @armchair_aero
Top

shelly wrote:What is you deifintion of plenum?.... but maybe sayshina and ringo you have something more specific and exhaust related in mind?

Look up your standard inline-4 road bike exhaust system. 4 headers into 2 intermediate pipes, with collectors, into 1 single collector (often refered to as a plenum chamber), into 2 tail pipes.

It's done purely for tuning purposes, as there's really no aerodynamic utility. The volume of the collectors will normally be well under 1 liter, and are tuned for pulses back to the valve. As to whether these should be called plenums at all, hmm, lots of things in racing are somewhat mislabeled. I've seen them often refered to as such, and since I don't see how a true plenum could possibly be fit into a current F1 car...

Marek, I don't see that single photo as representing any solution. It apears that it would cut down on energy transfer from the exhaust into the sidepod, I'd still be willing to bet we're talking about a significant percentage crossing over.
Top

@sayshina: I did not know there is a parta of exhaust system called plenum, and I think that my using a word witha specific sense in exhausts when talking about exhaust use has caused misundertanding.
When I wrote plenum I was referring to a chamber downstream of the exhaust, with any shape where exhaust blow in and mix, with a certain number of exits for tah flow no more correlated to exhaust path
twitter: @armchair_aero
Top

Shelly, yup, I caught your meaning. You specifically refered to intake airboxes after all. Though I'm a bit confused by your "specific number of exits" comment, as my understanding of the concept is you should be able to manage any number of exits.

At any rate, there's the theoretical and then there's the real world, and with intakes I know an engine guy recently mentioned they did high speed video of thier well established race engine and discovered to their surprise that fuel they thought was being burned in 1 cylinder was actually being spit out and sucked down another.

My point is that I don't see anywhere near enough available volume to do what you're thinking, so I made a quick guess as to what minimum volume might have some worthwhile effect, which I ballparked at 4 liters. There's nothing scientific about that guess, I've basically just estimated the volume used in production bike exhausts and blown that up in vague proportion to how much gas gets handled by each engine. For the record I have no idea of this relationship is proportional.

Assuming for the moment it is, I don't see enough available volume on current F1 cars to even do that.
Top

now I understand you completely sayshina. Agree wiyh you thet the volume needed for such a thing would be impractical on a f1 car. Rear end of mp4-26 seems much more slender than in testing now..so mabe they had fit it in a bulky rear (and found it unworthy maybe beacuse it stole too useful space).

about the numeber of exits: they are not an issue technically, but I think there is some rule that limits the number of exits to two, not motre, not less. So if by the rules you have to have only two exits, part of the advantage of creating a chamber goes away.

This could go well with the hypotesis someone else made in another post, of mclaren using the camber to test different exhaust locations opening 2 by2 exits and finally building a more traditional version of exhausts located inn the deemed better position
twitter: @armchair_aero
Top


Team Lotus is set to become the latest outfit to introduce a 2011-style blown diffuser, with the team planning to have it ready in time for the Spanish Grand Prix.

With a number of outfits working hard on implementing their own version of the concept pioneered by Red Bull Racing, Team Lotus has high hopes that the performance boost it should get from the update will lift it firmly into the midfield battle.

"We know there are big chunks of performance potentially coming if we nail it. We are working on it, and hopefully we will get it for Spain.

"The feeling is that there should be some good numbers coming from there, so I look forward to that. Hopefully we can unlock it and get it working properly."

I know that's supposed to be some dig at me, and I know you think you've just proved your point there, but come on. It's Lotus, and the only people in the world who actually believe Lotus is going to be a midpack team all work for Lotus.

By the way, Lotus is a different case. They really are just hopelessly slow. That's not the same as say Williams suddenly being able to make the odd podium. If Williams, Mercedes, or Ferrari suddenly gain a second, it WILL be for exactly the reasons I mentioned earlier. If Lotus suddenly gains a second, it will most likely be from finding outright performance. You keep assuming the entire grid is made up of RB and a bunch of morons.
Top

I didn't say that.
Just wanted to see what your opinion would be on Lotus' views.
Why is the blown floor seen as a performance improvement.
For Sure!!
Top

ringo wrote:
Williams to be top 3 with new blown floor.

Back to the topic now.

See the little V's cut out between the tunnel exit and the fins leading out from it? Are those vortex generators?
"Words are for meaning: when you've got the meaning, you can forget the words." - Chuang Tzu
Top

ringo wrote:I didn't say that.
Just wanted to see what your opinion would be on Lotus' views.
Why is the blown floor seen as a performance improvement.

I never said it wasn't a performance enhancement, and given that it almost HAS to have negative characteristics, I can't think of a single reason anyone would use it if it didn't make them faster.

The things that we as outsiders know are limited, but we do know that every exhaust used today is less effective than what was used last year. If this were not so then everyone involved in designing every F1 car would have to have been too stupid to see this great advantage. That would include the Holy Newey.

We can guess that the negative impacts of todays exhausts are not as great as last years. I can't think of any way to estimate how much less.

We can assume that the ratio of performance gain to negative impact is not as favorable as last years. If it were better they'd have been using todays exhausts then.

So, if the outright performance is lower, the negative impact is lower, and the ratio between them is lower, how could it be possible for say Lotus to get a bigger gain out of it than was possible last year?

I'd say wishful thinking most likely, though it is possible their car is so underdeveloped that massive time is there to be gained. They do have some clever people on board and we have seen back marker teams make sudden big gains in the past.

What I've said all along aplied only to top teams. You can't assume the McClaren or Mercedes is plain underdeveloped. That's both silly and rude to the many top level engineers involved. You CAN say it about Lotus, because while they have some clever people they don't have enough of them, and they certainly don't have enough money.

I still say whatever is wrong with the Ferrari is a glitch, something gone wrong. Since the only thing that's changed massively in recent weeks is the tires, I'd bet something about that change really doesn't get along with their car. Pirelli is unlikely to change their tires back, so it's going to be up to Ferrari to change their car. This is fundamentally different from "gaining performance", this is fixing a problem and REgaining peformance.

I still hold that is exactly what happened with McClaren. Whenever Williams gets its act together, same issue, though in their case it will be reliability performance regained.

And I'm still saying you can't claim these systems, any of them, are worth a second, or even 1/2 a second, in isolation. For one thing, any diffusers performance is going to be directly impacted by the rear suspension and rear aero around the diffuser. Again, I'd ask you to look up those bouncing Marches to get an idea of how badly wrong it's possible to get things.

Also, all of these systems impact the rear only, and given a mandatory C of G, there exists an ideal Center of Pressure, which unless you can balance with more front DF you've just moved rearward. This means that whatever your exhaust blowing is doing, it can't ever be as important as your front wing.
Top
62 posts