This highlights how skilled those honda engineers are in getting the compressor inside the v of the engine and boasting variable trumpets at that too!

Anyway that turbo at the back layout did not hurt Ferrari too bad in 2015 at all. It has it's merits.
Not driving a Mercedes? Work harder!
Top

PlatinumZealot wrote:This highlights how skilled those honda engineers are in getting the compressor inside the v of the engine and boasting variable trumpets at that too!

Anyway that turbo at the back layout did not hurt Ferrari too bad in 2015 at all. It has it's merits.

Yeah! I always thought people were way to hard on the Honda engineers. These guys (all the F1 engineers are f*cking ninjas as far as I am concerned.) =)
Top

"Which isn't a bad thing, I think on day one it's a lot better platform to work from than what we had this time last year.
"There wasn't any whiplash or anything like this... but I'm a bit happier and it's a good start, it's probably all we can ask for, for now."
He hopes more performance will come from the unit, either later in this week's test or during the second group of four days at the Catalunya track in March, when the focus moves away from reliability.
"We are still not on race trim, in terms of power, and we don't have all of the bolt-on bits on it at the moment," he added.
"For now it is as expected.
"The team did say 'expect something similar to last year', for the first test at least.
"It's pretty much that for now. I would say it's a decent start."

Palmer:
"There's a difference - it's obviously not as powerful as the Mercedes engine and you can feel that," he said.
"But there's benefits as well - the driveability is good, the Renault engine guys are working very well. We've been working with them over the winter and they've got a good handle on the procedures, the driveability of the engine.
"But, at the moment now, still definitely behind Mercedes on power."
http://www.motorsport.com/
Top

Funny the Swiss watch has run this far without issues?

Let's cross fingers that it's not a problem with the engine per se... I think it's way more likely that Renault --- up cooling/installation of the engine considering the tight time shedule they had to build the car.
Top

FW17 wrote:Funny the Swiss watch has run this far without issues?

The new PU
looks like they using two air-air intercoolers which look similar to the single intercooler they used last year for the Merc PU, bur smaller. And they are placed lower on the sidepods, under the engine radiaors. So it's a similar cooling layout as STR and RBR 2014-2015.
Still the same architecture with the whole turbo placed at the back. whith very long charge air channels which must also endure the exhaust and the turbine heat...
A huge turbo under a ton of heat schields
A completely new intake plenum.
https://pbs.twimg.com/media/Cb6hkEfWIAQ9YzZ.jpg 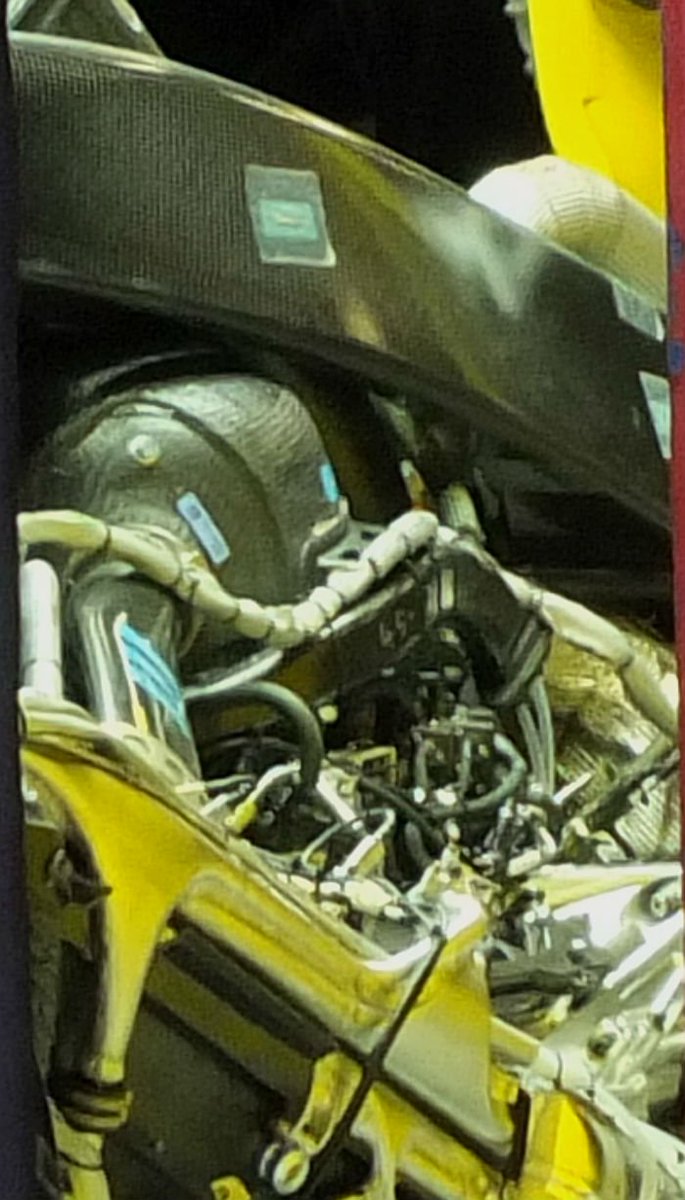 Waste gate pipe looks insane.
This unit is poorly packaged that's for sure. May not be as thermally efficiency as the Merc.
For Sure!!
Top

First I thought it's just an evacuation pipe that the mecanics put on the exhausts when the car is in the garage, to channel the gazes away... but yes it might be the actual wastegate pipe

Quiet sure Tag branded engine has a different wastegate to Factory engine. I guess Redbull probably did there own exhaust pipes too to fit their cooling layout.

The Red Bull 'Tag' unit is fork of the Renault base unit with their own modifications.
Top

munudeges wrote:The Red Bull 'Tag' unit is fork of the Renault base unit with their own modifications.

That was a rumor perpetrated by TheJudge13 among others but is not allowed under the current rules.

The engines must be the same.
Top
3077 posts