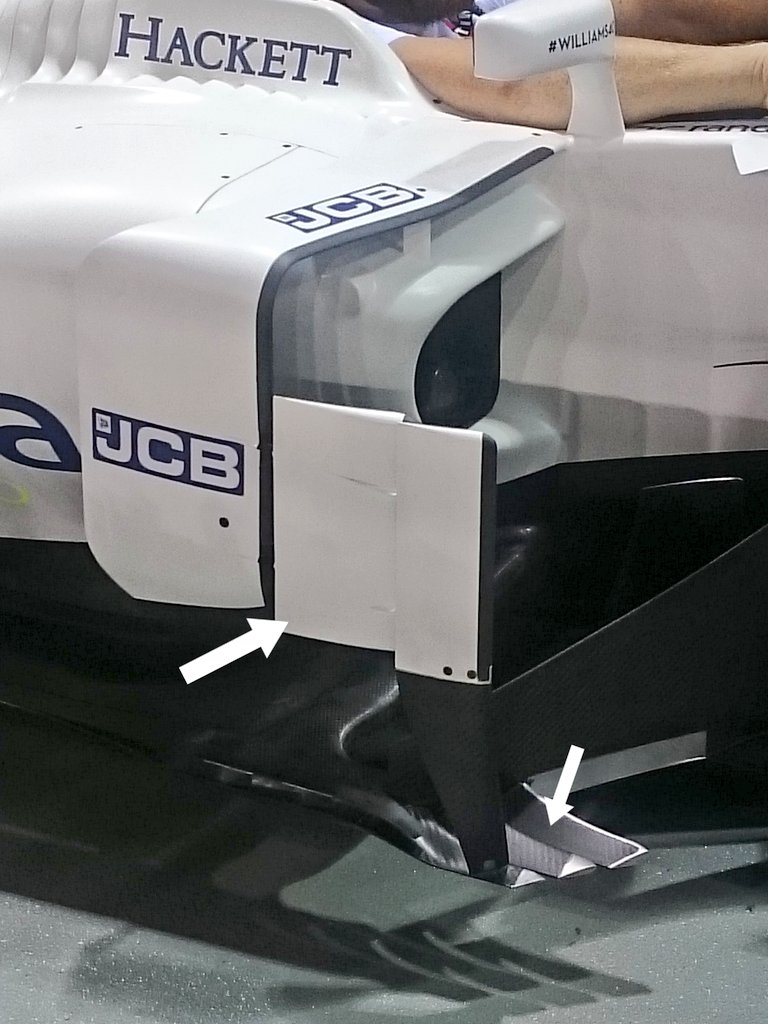 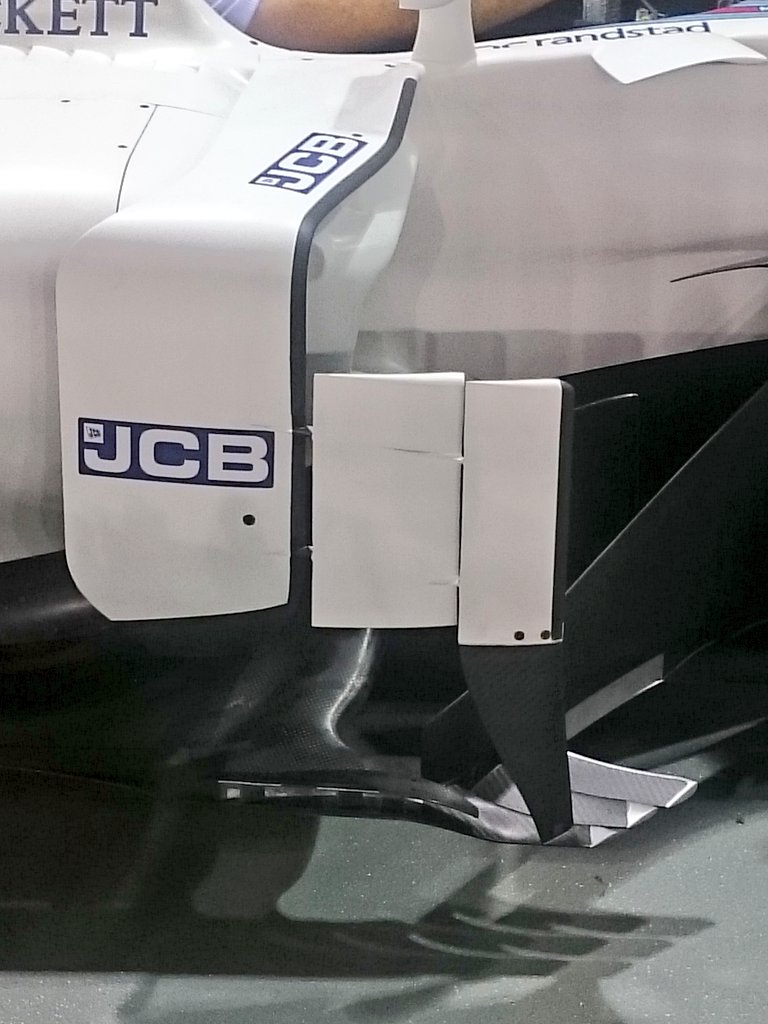 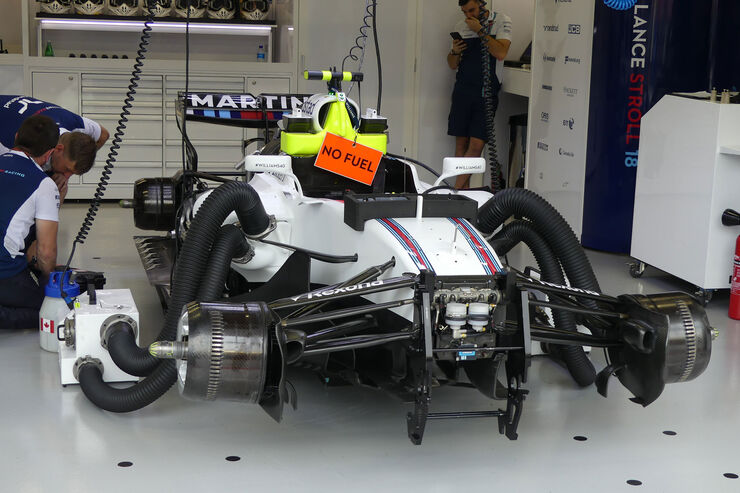 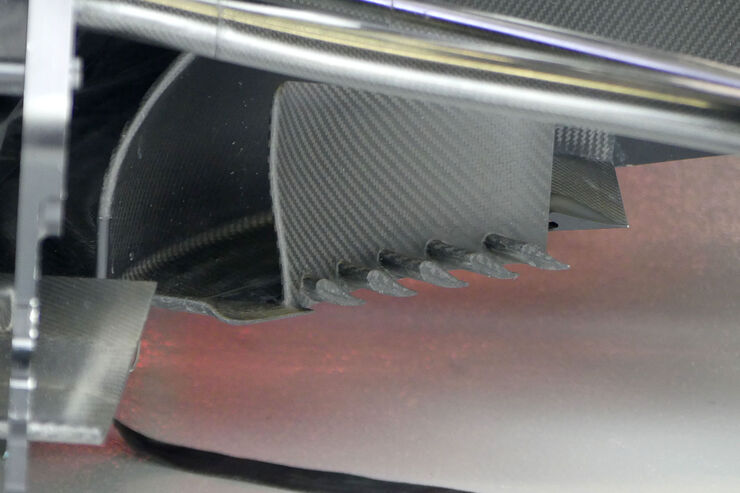 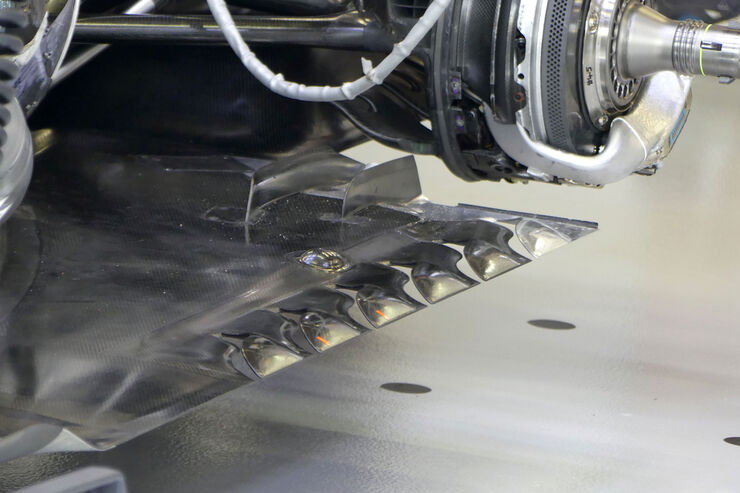 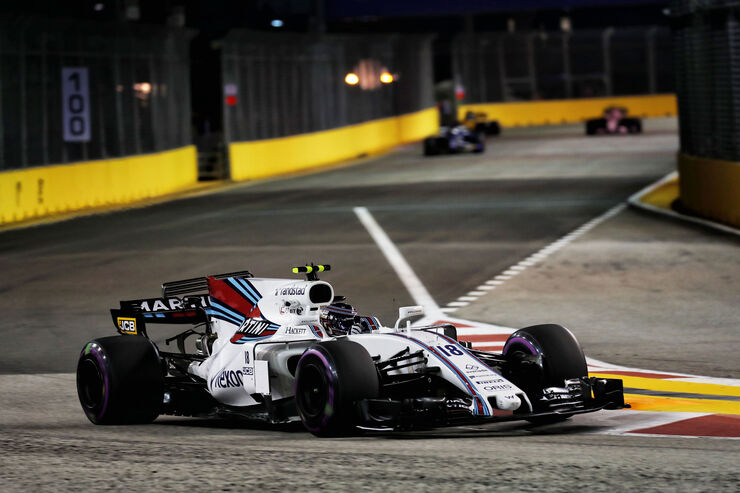 The bargeboard area was always likely to be a key development battle in 2017 and, since Paddy Lowe’s arrival from Mercedes, Williams have been making steady progress in this region.
Lowe has clearly translated his knowledge from Brackley to the aero department in Grove as the team have approached key aerodynamic components in a similar way to that of the Silver Arrows.
Although not a direct copy, Williams has complemented the horned turning vane on the chassis side with two further bargeboards on the sidepod shoulder [yellow arrow] akin to the Mercedes.
Collectively the arrangement of turning vanes are designed to shield the fast moving air passing through the sidepod undercut from the wake of the front tyre, which is crucial to the performance of the diffuser behind.
Further signs of Mercedes influence can also be noted on the axe head [red arrow] – the protruding section of the floor that forms the anchor for the bargeboard assembly. This has been divided into three distinctive teeth. An aerofoil profile helps to divert airflow between the teeth and flip it out along the car’s flank, which should help seal in the low pressure air passing beneath the car.

In Singapore, Williams continued its update philosophy of bringing developments to its FW40 on a consistent basis, again focusing on the bargeboard and sidepod front area, where there is significantly more regulatory freedom than in previous years. Like on the Mercedes, the Grove team has added two further airflow conditioners ahead of the main element, in order to improve the attachment of airflow to the sidepod as it narrows heavily in the ‘Coke-Bottle’ region of the car.

This is achieved by creating a narrow channel between the sidepod and the conditioners, speeding up airflow in this area, and making the ratio of inertial to viscous forces greater, for lower pressure drag. In addition, it appears as if the two new conditioners have wing-shaped vertical cross-sections, both of which would produce vortices, and bring some coherence to the turbulent tyre wake by drawing it into the rotating flows. 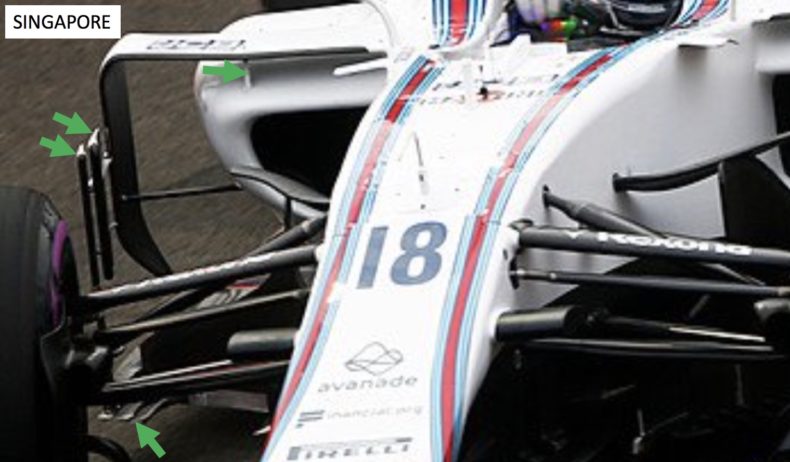 Elsewhere, the height of the main conditioner has been reduced, with the most forward element being the one that extends right down to the floor, and is directed outward at its base. This is aimed at attacking the front tyre wake further forward, along with the bargeboard, for improved rear end load consistency.

Also note that the forward extension of the floor is no longer one piece, but has been widened and split into three elements, each with a wing-shaped cross-section (not visible here) and downwash orientation. The former will result in the production of mini-vortices, which are energetic airflows, and combined with the latter, will protect the underside of the car from turbulent air emanating from the front tyre.

In addition, the leading edge slat at the top of the sidepod has had its geometry tweaked, as the team again looks to minimise pressure resistance, via a similar method to that mentioned above, but this time along the sidepod’s upper surface. A vertical element now connects this part to the sidepod’s surface, and this may serve a structural purpose, keeping the gap between the two consistent, under all conditions, for optimal flow over the sidepod and to the rear of the car.
Top 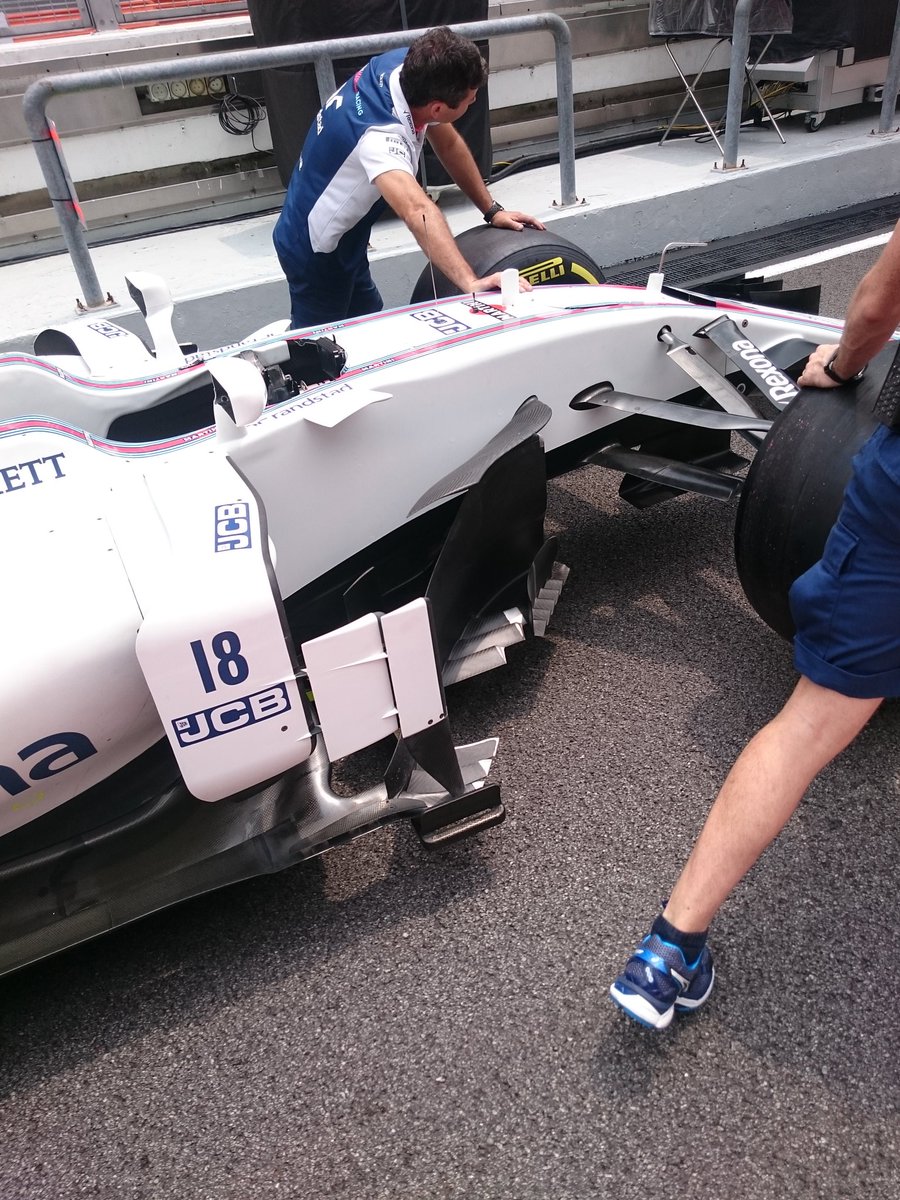 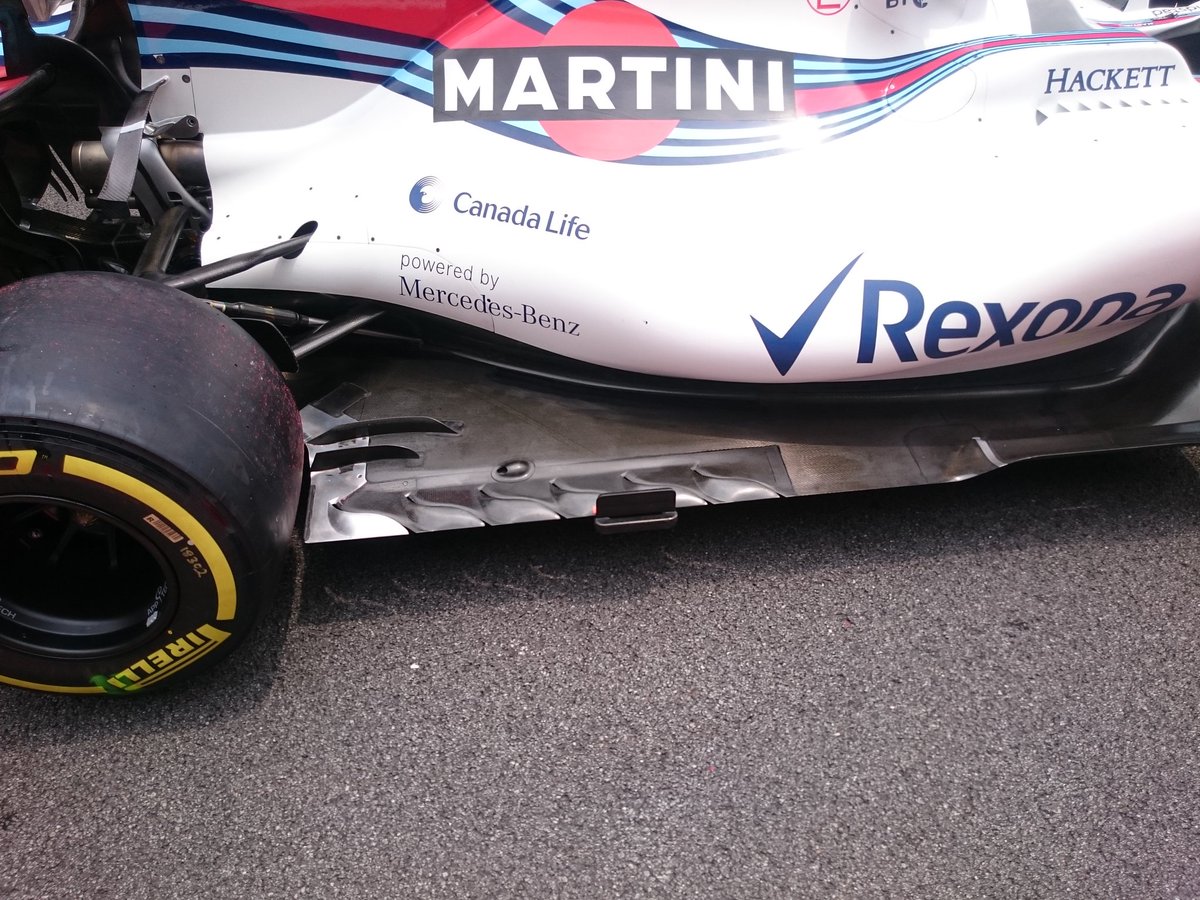 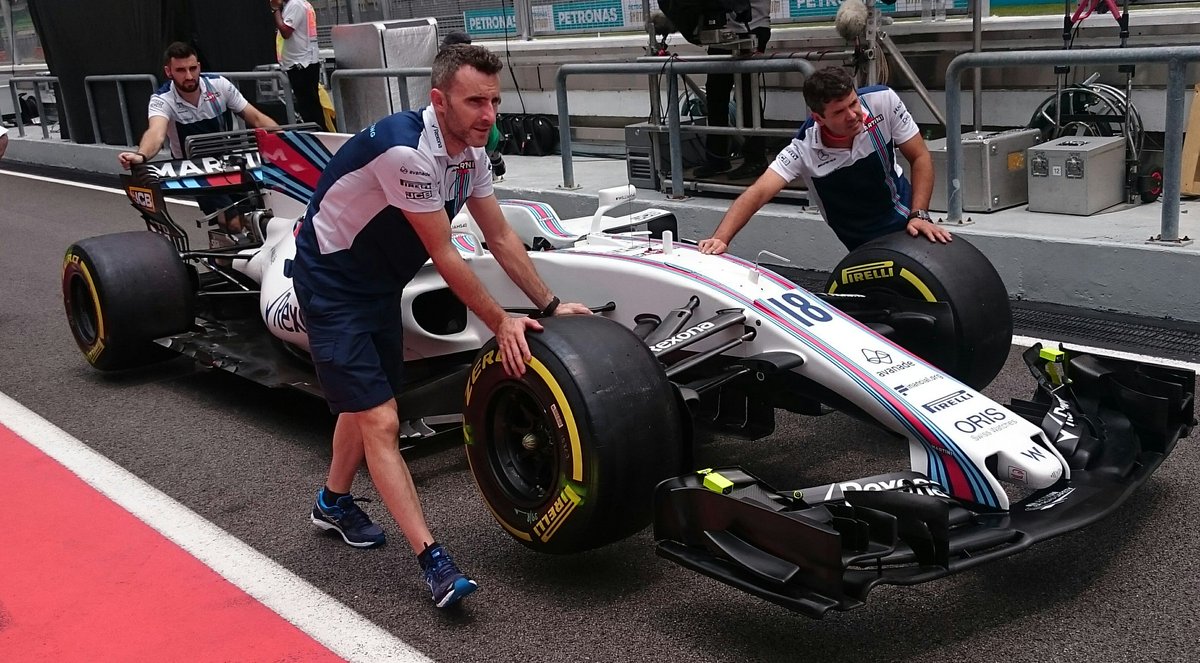 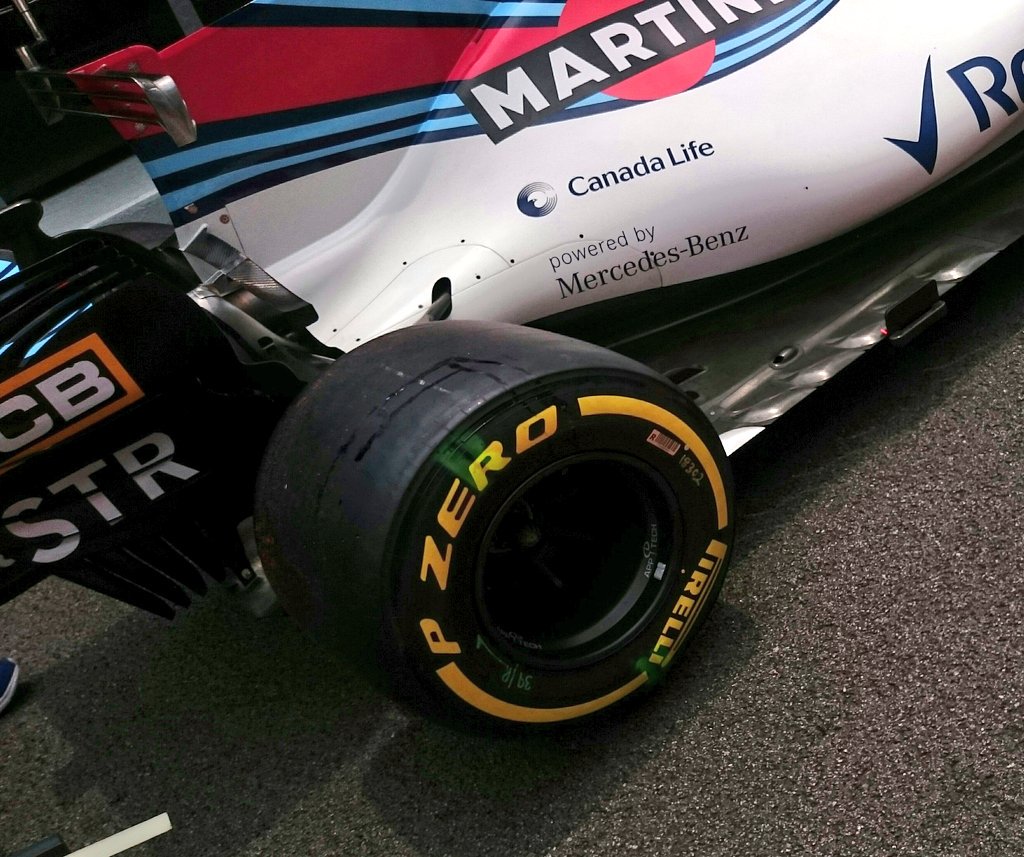 ..."In addition to the new engine, Williams has brought some small aerodynamic tweaks to Malaysia, with the combination of improvements coming at a time when the team is locked in an increasingly title battle for fifth in the constructors' championship."...
Top 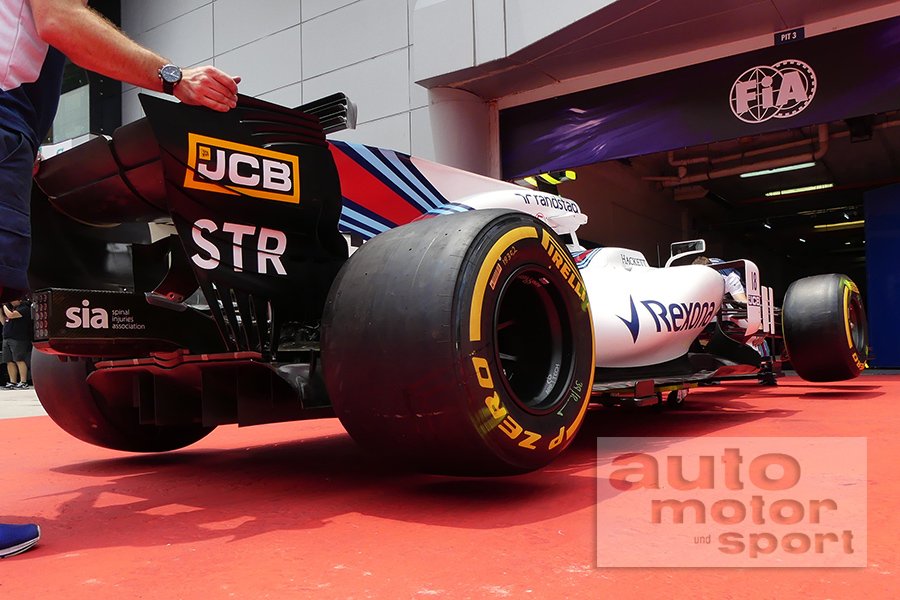 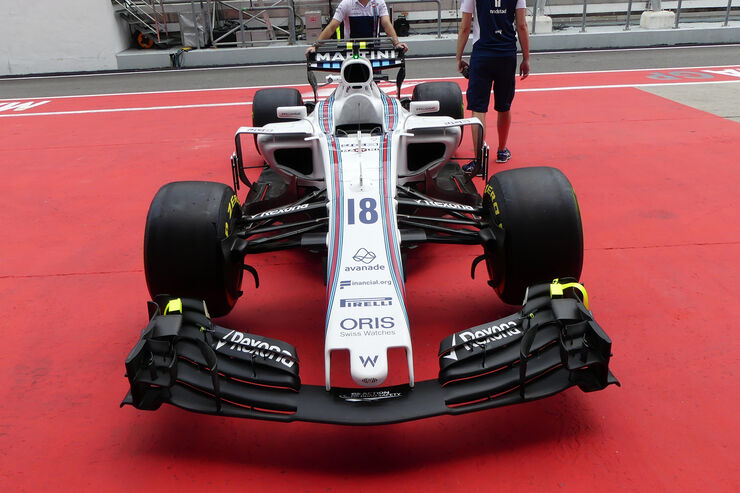