Specifications of 50 famous racing engines up to 1994

All that has to do with the power train, gearbox, clutch, fuels and lubricants, etc. Generally the mechanical side of Formula One.
255 posts

A pdf file with very nice pics:
History: A relic of the 60s 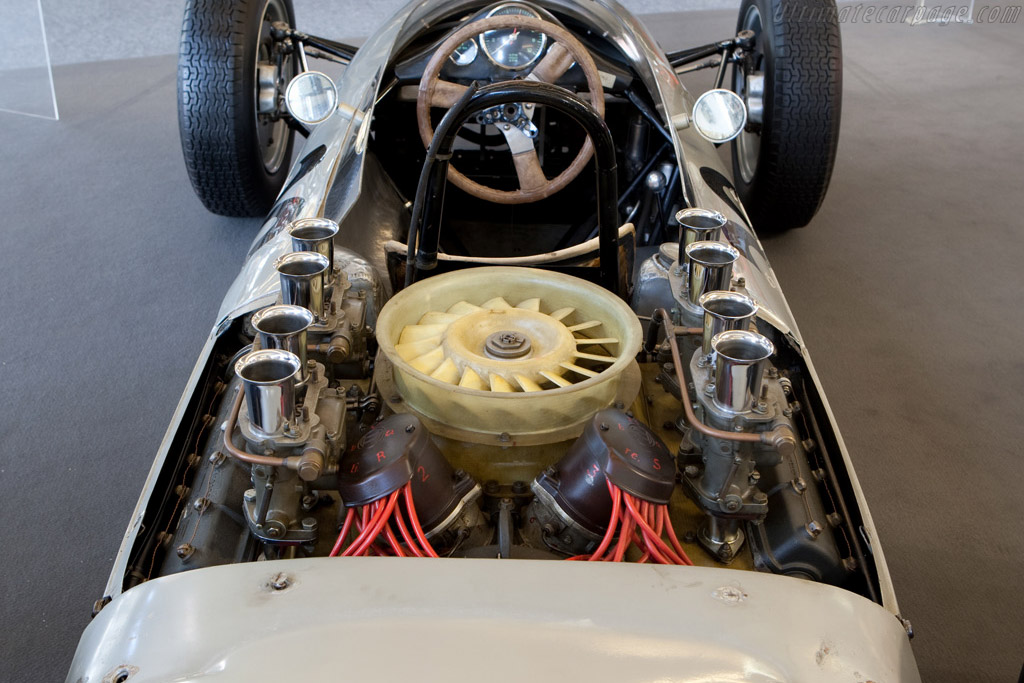 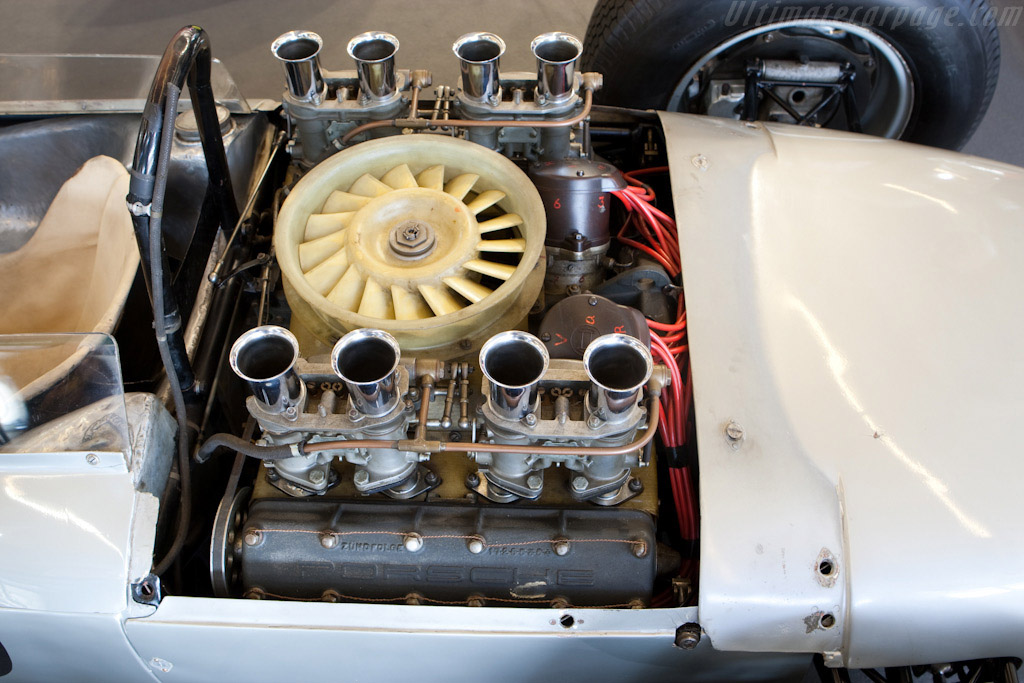 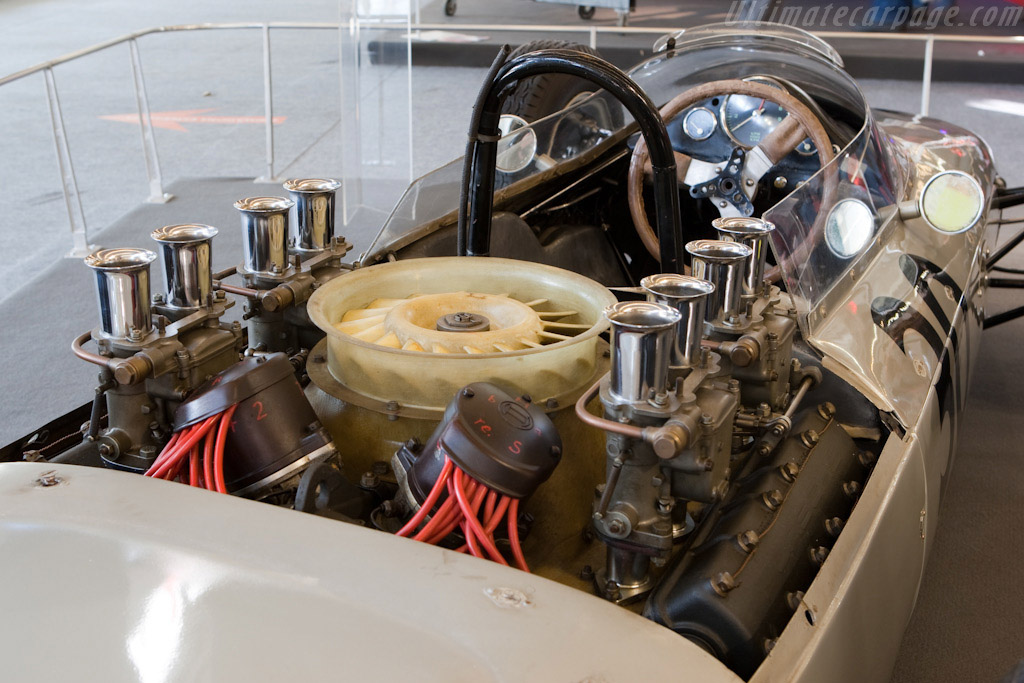 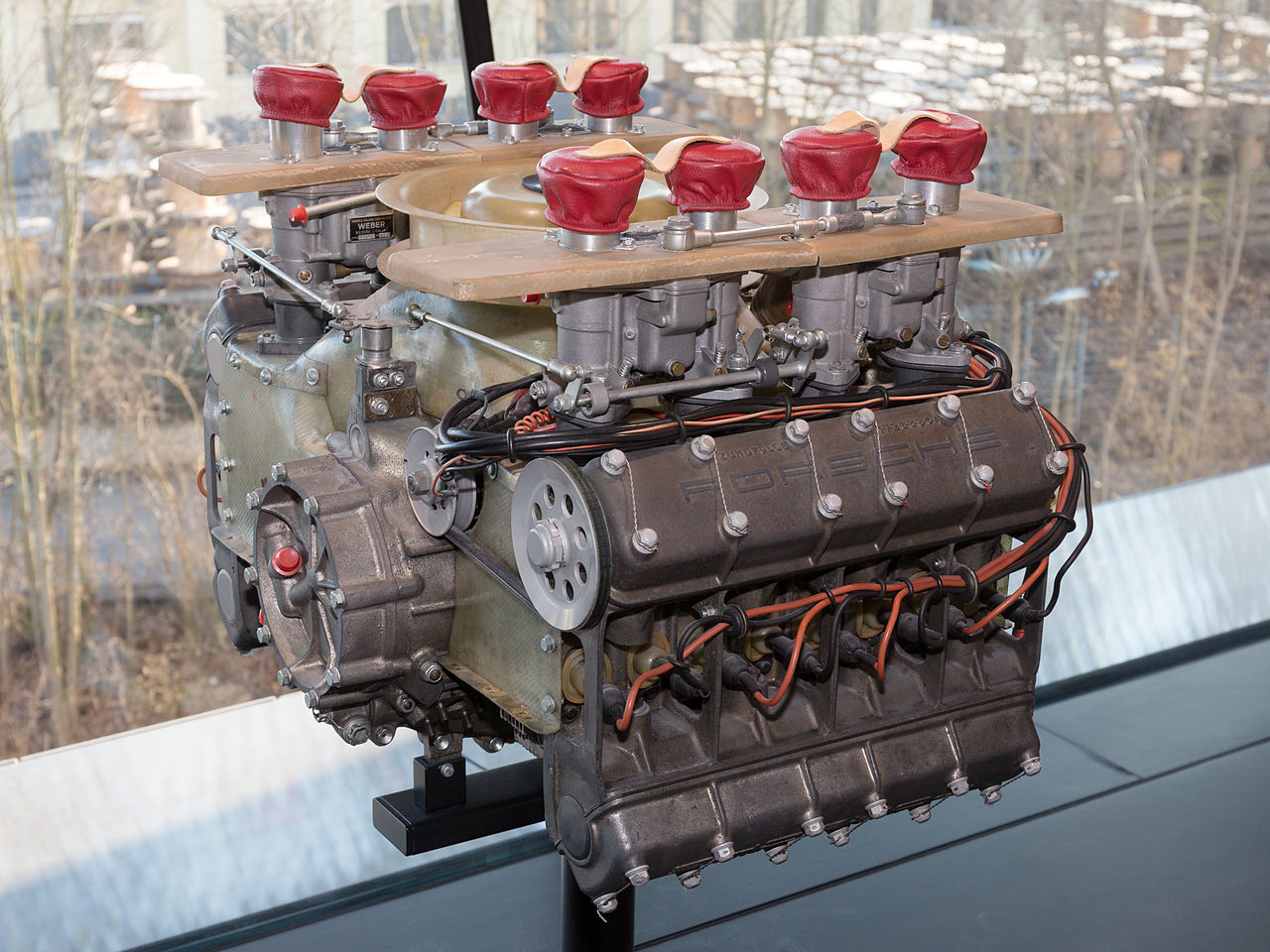 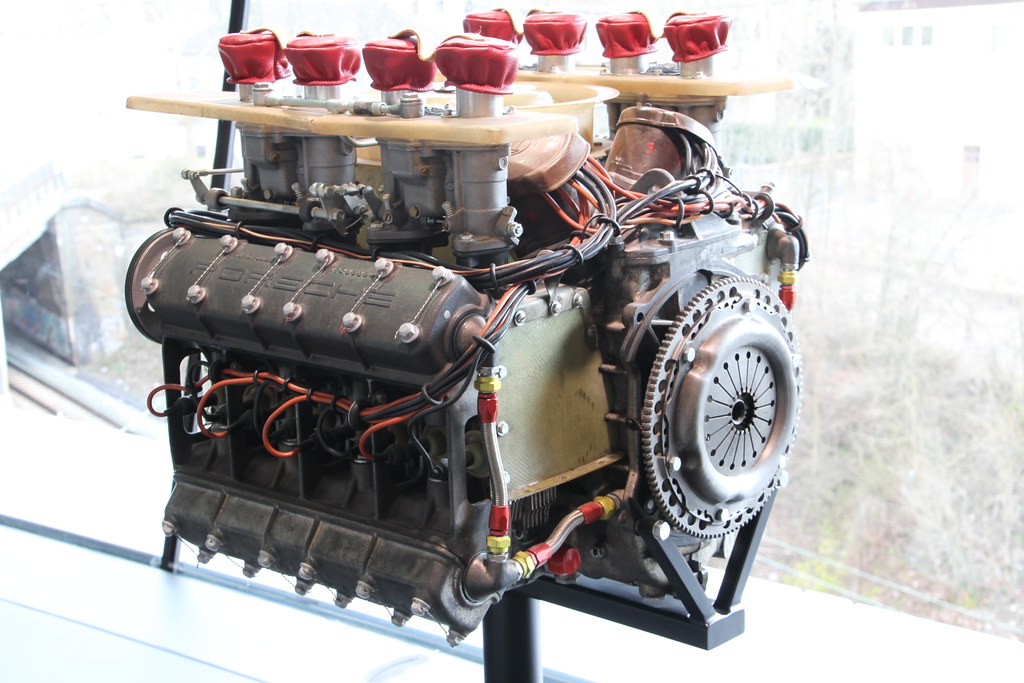 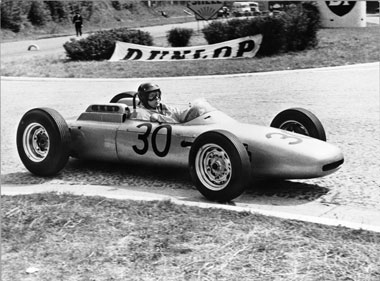 Here's a splendid eaxample of how racing development can achieve results on an excellent engine design.

Ten years after 1st flying, the DOHC/4V Napier Lion W12 had doubled in power, ( & in compression ratio*),
to enable a splendid win in the renowned Schneider Trophy International, & at record speed.

Another decade later, the now venerable Lion would also power Cobb-Railton's World Land-Speed car,
(in supercharged form, & at 3X its original power rating), to take, & duly hold, that title - up to the 1960's.

*See the following page in the linked article for the effect on power output via fuel/comp-ratio values.
Dr Moreau sez..
"Who breaks the law... goes back to the House of Pain!"
Top

1965 Coventry Climax FWMV 1.5-litre V8: A short development period, first raced in 1961, overheating and water loss plagued the new engine, but by 1962 the Climax V8 was ready. In all 33 race engines were made plus some development engines.
By Wally Hassan technical director and chief designer Peter Windsor-Smith, it had an aluminum sleeve clamped by the head against a ledge 75mm down in the open-deck-top block and inside this sleeve was a thin iron dry cylinder liner with a flange at top that contacted the sealing ring with the head bolted down on top. Later on the deck of the block was closed. This V8 is said to have been the most straightforward and simple GP engine ever produced.
2-spur gears at nose of crank reduced engine speed by half, driven from there was a jack-shaft from which 2-sprockets drove separate Renold 3/8in single-row chains to each cylinder head, with the front of the half-speed gear driving the twin outlet water pump. Behind the water pump was a sprocket driving a cogged rubber belt that drove the fuel distributor.
When in 1964 a 4-valve head was introduced a much more oversquare version was also introduced with a change to a gear cam drive instead of the chain drive. A transistorised Lucas ignition was used. Valves at an included angle of 60 degrees were used. Camshafts ran in 5-steel backed babbit bearings in an aluminum carrier in which the inverted tappets slid directly. 2-coil springs per valve were used.
Champion spark-plugs were at center of each combustion chamber. 21-4NS steel valves were used. Crankshaft ran in Vandervell lead-bronze thin-wall bearings retained by cross-bolted steel main caps, the crankshaft had been of flat 180 degree pattern.
Slim I-section forged con-rods were left in the as-forged condition, internally tapered gudgeon pins of 5/8in diameter held by circlips in fully-skirted Mahle forged aluminum pistons, each piston had 2-compression rings, the top one being a Dykes-type, and 1-oil-ring.
Driven at 0.7 times engine speed, the 2-oil scavenge pumps each having the same capacity as the oil pressure pump and drew oil from front and rear of sump. All pumps were mounted at front of engine. 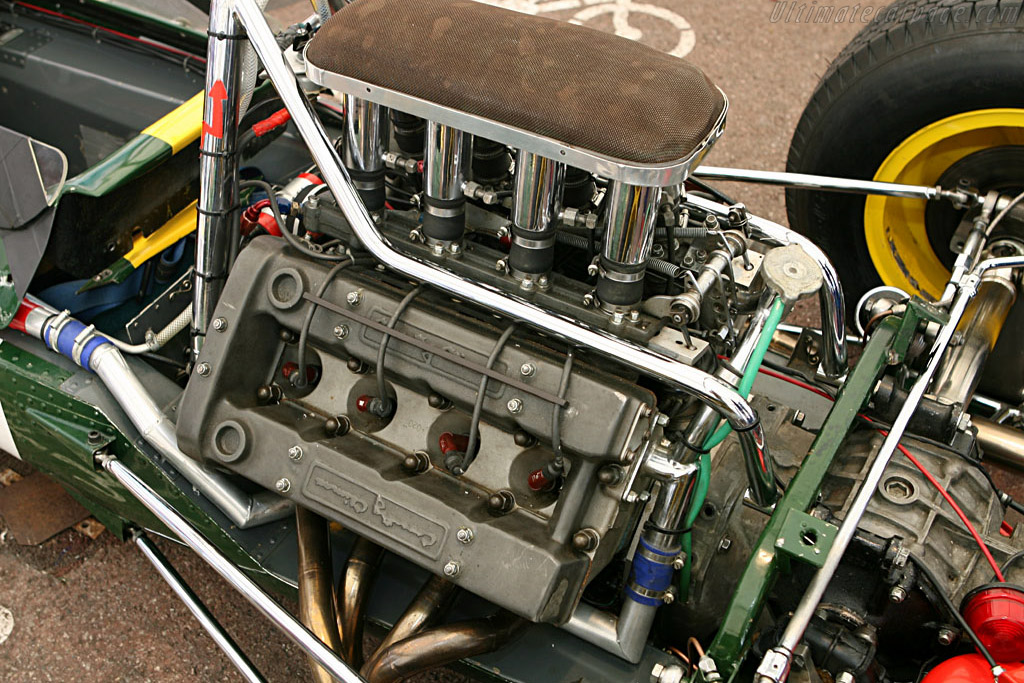 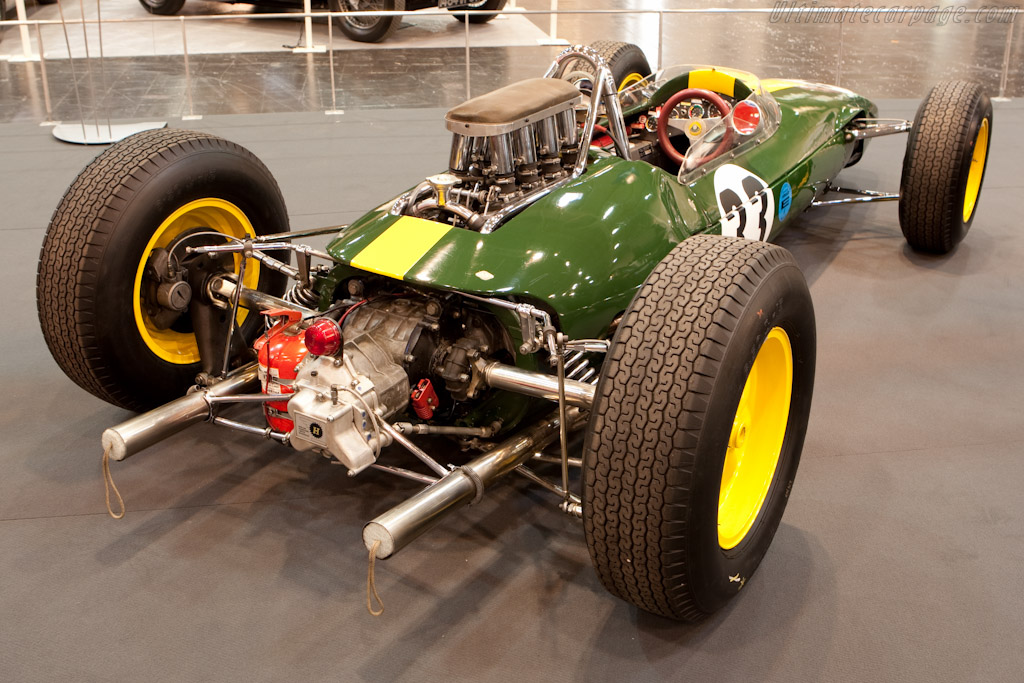 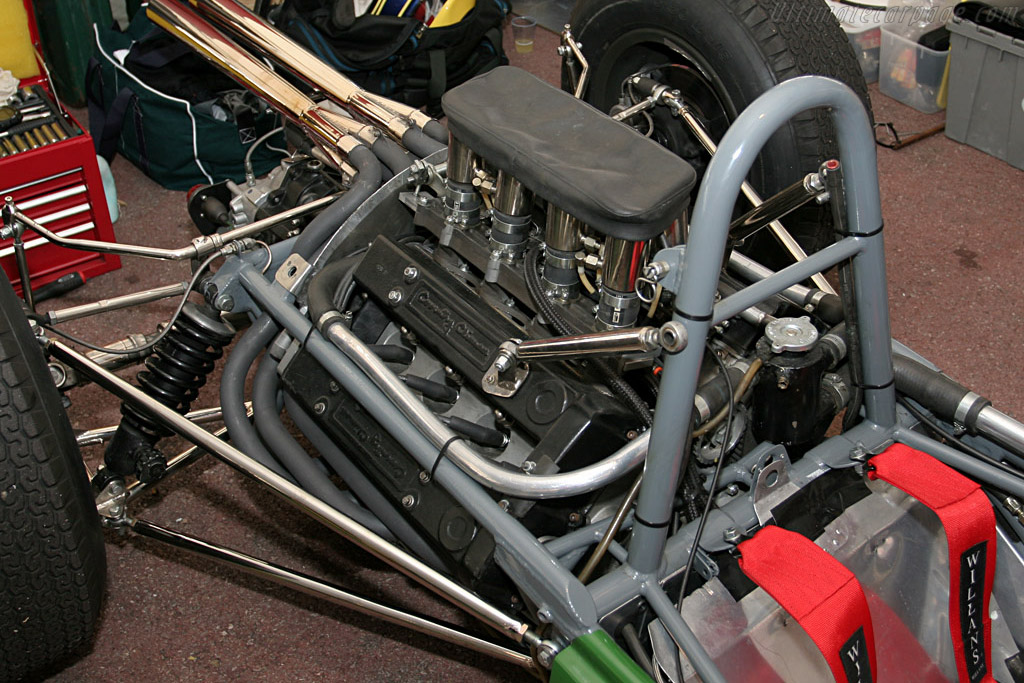 btw the Napier Lion was made obsolescent when others introduced aluminium alloy cylinder heads
having steel combustion chambers the Lion worked much better on special fuels than on the standard fuel of c. 60 octane
Napier refused the H.M.Government request for an alloy-headed engine emulating the latest Curtiss
so the request was given to Rolls-Royce .....
the RAF offered all its Lions to the Tank Corps for £5 each - unsuccessfully
Top

Looks big for its displacement. Using that guy sitting in the car for reference. 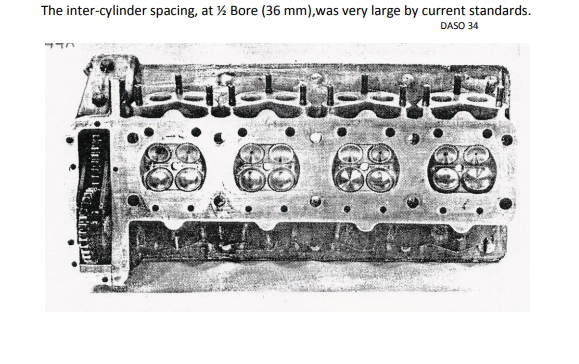 1965 Honda RA272E 1.5-litre V12: For the new 1961 1.5-litre formula1 only Honda and Ferrari raced a V12 engine during that formula. Honda produced a strikingly transversely placed cylinders 60 degree V12 engine. The east-west layout incorporated the complete power train as an integrated package.
The engine cam-drive gearing was completely of the gearing to the transverse transmission. This drive was taken from a spur gear at center of crankshaft, which made it into 2 short stiff vee-sixes as far as the crankshaft was concerned. At a reduction of 1.85:1 it drove a short transverse shaft, from which 2 skew gears drove shafts going downwards to the gear-type oil scavenge pumps mounted in the sump.
From the transverse shaft another gear pair drove yet another east-west shaft, this long shaft was driven at a further reduction of 1.21:1, so this shaft turned at 44.7% of engine speed. On the right end of this shaft was the multiple-disc clutch that drove the gearbox -2 more transverse shafts- at another reduction of 1.14:1 through a pair of gears that could easily be changed to adjust the overall ratio. On the long shaft’s left end was the engine’s single water pump with twin outlets which delivered coolant directly to passages cast into the block and heads. Coolant outlets went also to a manifold which was integral with the magnesium inlet camshafts covers of both cylinder banks.
Near the center of the long shaft was a spur gear from which drive progressed up to the V12 center of all 4 camshafts. A large idler gear at the center of each cylinder head drove its 2 cam gears, the gearing from the long shaft to these idlers established the necessary half speed ratio for the cams.
From the top of the gear at center of the rearmost exhaust camshaft another gear drove the fuel injection distributor that was used for the developed version of the engine, as used in the 1965 RA272E Honda; it first raced in 1964 as the RA271 with 6 twin-throat downdraught Keihin carburetors. A single central 10mm NGK spark plug was used. Valve inclination from vertical were 30 degrees for the inlets and 35 degrees for the exhausts. 2 conventional coil springs closed each valve, the springs were shrouded in long skirted cup tappets which slid in bolted-in carriers in the head.
Hollow camshafts were made in pieces and joined together inside its central drive gear. 4 narrow needle bearings supported each 3-cylinder camshaft. A single aluminum alloy casting constituted the cylinder head for each 6-cylinder bank. In an unique Honda process the head was cast around chamber roofs made of an aluminum-bronze alloy which bonded to the head material. These formed the complete surface of the pen-roof combustion chamber and provided durable valve seating and spark plug threading. The spark plug recesses were cast open then closed later by inserted cups, a construction which allowed maximum control of the casting cores.
Fully skirted pistons with crescent cutouts for crank counterweight clearance. 2-thin compression rings and 1-oil ring were used. Steel I-section con-rods were used.
One single complex aluminum heavily ribbed casting constituted both the RA272E cylinder block and its gearbox and final drive housing. After installing all gears and reciprocating parts, its bottom was closed by another large aluminum casting that provided a sump for the entire unit. The complete assembly weight was 215kg.
Wet cylinder liners, ribbed around their circumference and sealed at bottom end by O-rings in groves in block. Liners were clamped directly by the cylinder head and 16 studs. Cylinder liner to head gasketing was by mean of sealing rings in grooves in top of liner. The crankcase casting extended down past the crank centerline, which was carried in 7 main bearings. An earlier version had an extra bearing flanking the central drive take-off gear. All the bearings used were rollers bearings, so the RA272E bottom end only required low-pressure lubrication to the main bearing, which then distributed overflow oil to the rollers big-ends through slinger rings. A build-up crankshaft was used. 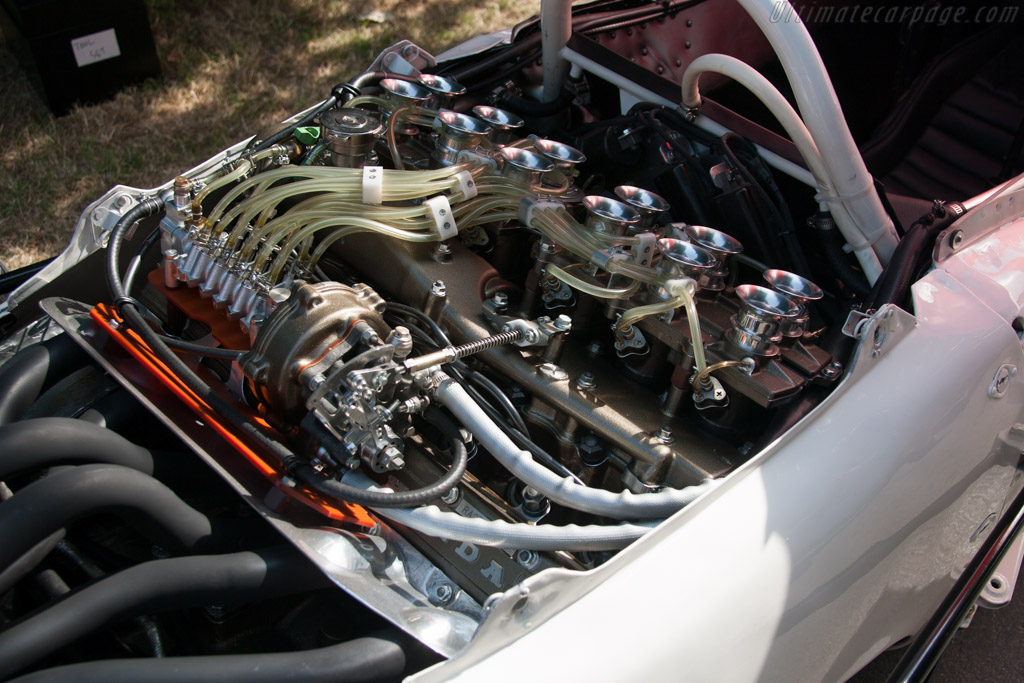 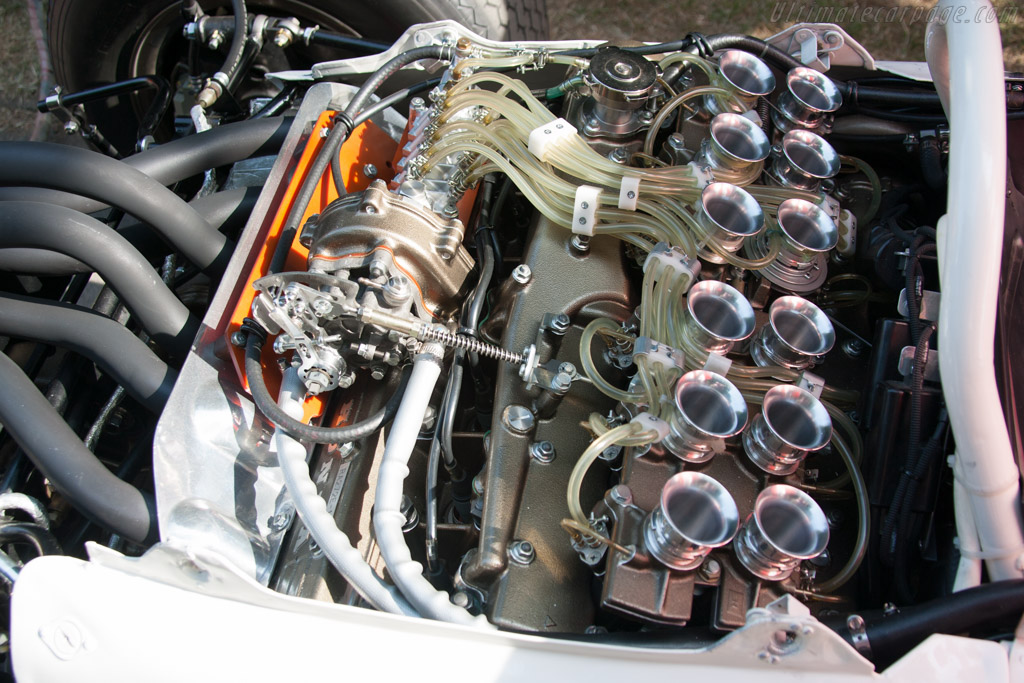 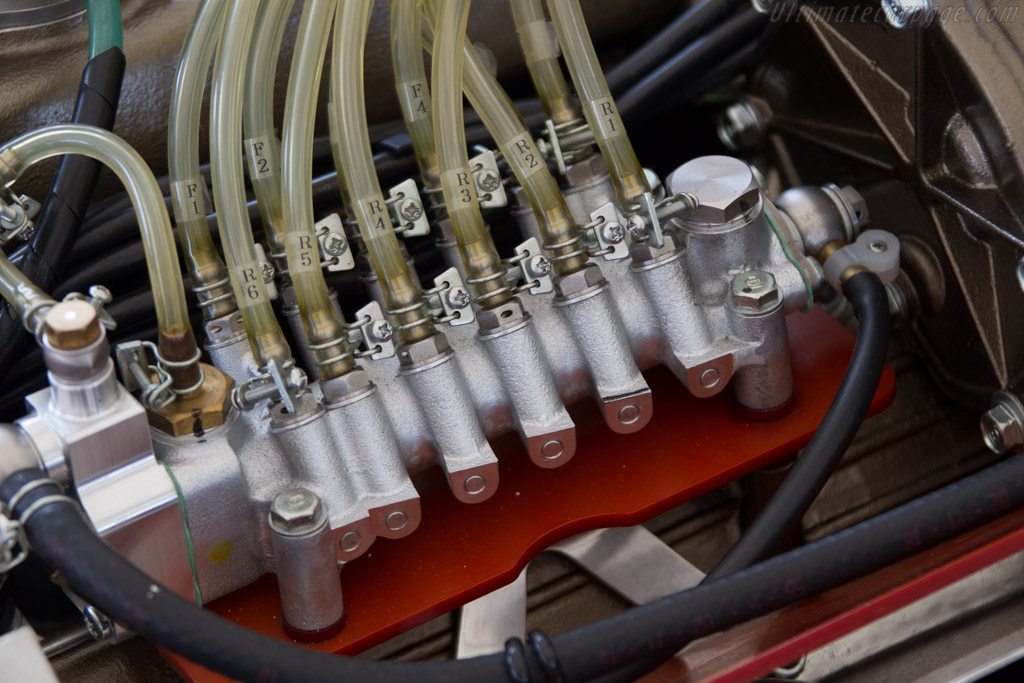 Engine sound:
"For every complex problem there is an answer that is clear, simple and wrong." H. L. Mencken
(¡Puxa Esportin! temporarily on hold due to you know what)
Top

Re 'Maserati F1 TIPO 8 sold to Honda' and also 'Honda having produced a 135 degree V8',
On numerous occasions when I declared something of the like I was promptly asked to supply a source/link to what I said. I hope that Tommy Cookers doesn’t mind me asking him to supply a link or source as regards what he said, because I not only didn’t know about what he said but also could not trace anything of what he said. But my trying to confirm was not in vain because I came upon a splendid PDF development paper by Honda “Honda R&D technical review 2009. F1 special (the third era activities)”. Where I discovered that Honda were not only hollowing most of the innards of their crankshafts but also their con-rods among other interesting things.
Top

The book (by Mark Whitelock) re Honda 135 degree V8 must be the only place that such a Honda engine is quoted at, as otherwise it is untraceable anywhere else.
Re 'sold' it to Honda, understand now the way you expressed it. but is it considered that Issigonis 'sold' it to Maserati?.
Top

I have no doubt that Honda used quite a bit of their G.P. motorcycle data to produce their transverse V12,
( even retaining air-cooling for the early units) since they'd won championships with inline 4's & 6's similarly mounted transverse-wise ( & in unit with transmission), via motorcycle chassis.

Of course, Italian makers - Rondine/Gilera/MV-Augusta - had been successsfully racing transverse-mounted inline-4 cyl unitary-transmission engines, for decades previously.
Dr Moreau sez..
"Who breaks the law... goes back to the House of Pain!"
Top
255 posts