All that has to do with the power train, gearbox, clutch, fuels and lubricants, etc. Generally the mechanical side of Formula One.
9863 posts

If scavenging is being achieved with these engines via wave tuning, then what use is supercharger mode?
Last edited by roon on Thu Jul 11, 2019 7:13 am, edited 1 time in total.
Top

The use is a drastic reduction in pumping losses.
The height of cultivation is really nothing special. It is merely simplicity; the ability to express the utmost with the minimum. Mr.Lee
Top

That's my understanding as well--the exhaust stroke essentially becomes easier. My question poorly phrased. If wave tuning is relied upon to reduce cylinder pressure, then: to what degree? How would a wave induced pressure drop compare to wastegate operation?
Top

That's my understanding as well--the exhaust stroke essentially becomes easier. My question poorly phrased. If wave tuning is relied upon to reduce cylinder pressure, then: to what degree? How would a wave induced pressure drop compare to wastegate operation?

A quick search found me this: 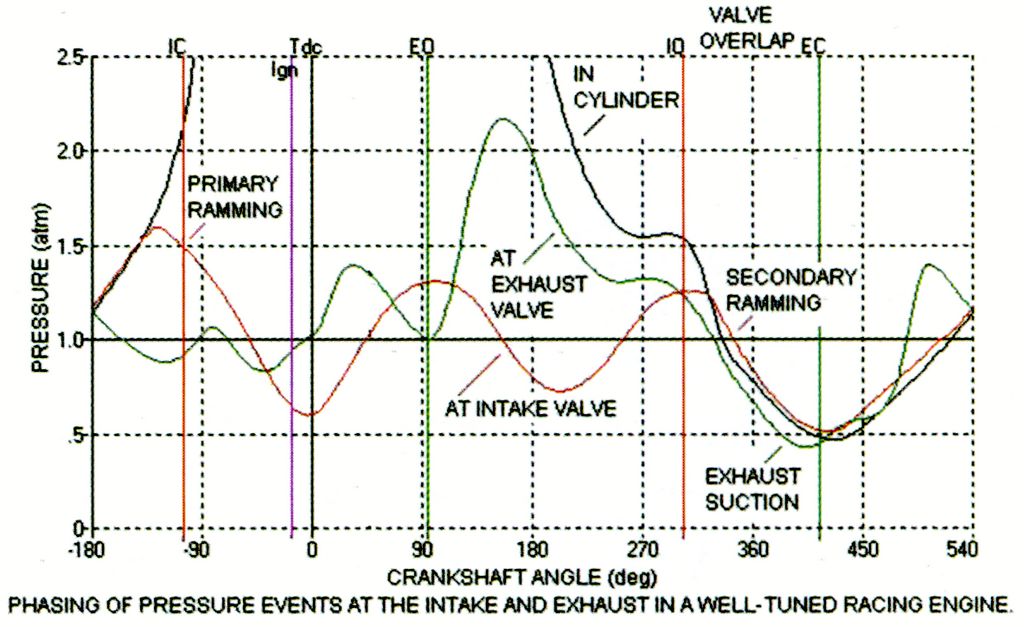 If true, it would lower the pressure to half an atmosphere.
Top

saviour stivala wrote: ↑
Thu Jul 11, 2019 5:45 am
Wave tuning is a critical part of a naturally-aspirated engine’s efficiency, since it is the only way to create ‘charge’ motion o0ther than – and sometimes in spite of – piston motion. Wave-tuning is what made the huge jump from engines that only had effective filling in the 40 – to – 70 – percent volumetric efficiency range to the common 110 – to – 130/140 – percent numbers....

well ... and sincerely ....
what charges all NA engine other than/in spite of piston motion is 'Bernoulli' - kinetic energy changing into pressure energy
wave 'tuned-length' effects can be added to supplement this (for racing) - or be deliberately kept trivial (for your parents' car))
because wave tuning works essentially near to a fixed rpm (unless it's variable geometry) - and is also noise-generating
anyway all WT'd engines are simultaneously using Bernoulli

Bernoulli tells us when a moving column of gas is stopped the pressure rises according to the square of the gas speed
this means that eg the inlet valve can usefully be opened before tdc and closed after bdc and so help the VE
Be can give a VE close to 100% - but only where gas speeds are high ie peak at c.800 mph the 'speed of sound'
this means rather large ports and valves - to keep peak gas speed subsonic even at 100% rpm
but eg at 50% rpm Be is only giving 25% benefit (and cams designed for Be at 100% rpm are wrong for 50% rpm)
road engines of course had small ports/valves to get max Be at rpm well below 100%
so the charging/rev fell at high rpm as the ports 'choked' via losses in attempting supersonic peak gas speeds
the result was a practical though unexciting torque/power curve
even race engines were compromised in this - different designers having different ideas
eg the Cosworth DFV chose/had unfashionably high gas speeds from seemingly (to some) 'small' ports and valves

early post WW1 GP winners had extended valve timings and WT (on the induction side anyway)
invented by motorcycle racing then car racing on ovals in the UK and USA
inlet port and valve sizes for Be helped power curve (eg 1923 Fiat-clone GP Sunbeam had 3 gears vs preWW1 Peugeot 5 gears)
European inter-war NA motorcycles developed extreme WT incl megaphone exhaust but had good Be by not over-porting
this drove later NA F1 design though most compromised on exhaust and/or inlet side for power curve reasons
till liberated by intelligent injection/fbw throttles, vg induction tracts, and 7 speed paddle shift gearboxes


when I claimed a NA VE of 125% was possible proof was demanded (not from s s) - so doesn't 130%-140% seem high ?
of course the car's forward speed can increase VE and power
and increase the power from exhaust thrust power (this at max speed about 3% of current F1 PU ?)

If true, it would lower the pressure to half an atmosphere.

That is a wonderful illustration I haven't seen before - thank you rscsr. I recommend anyone should spend some time to try and understand what is happening there.

The following image shows instantaneous pressures in the cylinder and exhaust port of the Wright TC aircraft engine which extracted up to 500 bhp (18% of crankshaft power) from the exhaust. Note that average exhaust pressure is about 3 psi but cylinder pressure when exhaust valve closes is about 1 psi below atmospheric, enabling significant scavenge during valve overlap. (intake pressure is several psi above atmospheric).

Also note the similarity of the exhaust pressure trace to the image posted by rscsr. 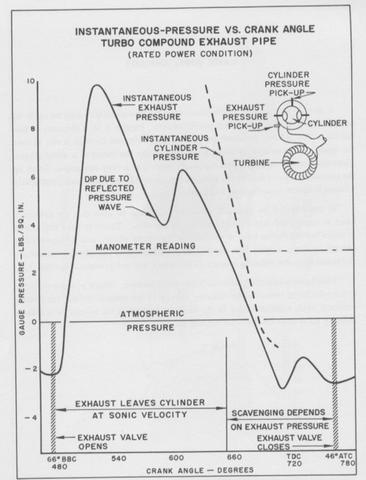 The main factors seem to be the relationship between cylinder pressure at EVO and exhaust runner/manifold pressure at EVO. I'll call this exhaust pressure differential, EPD. There may be an established term.

These my speculation. Scenario 1 would be a sort of atkinson mode.

The flow out of the narrow
wastegate pipes must be incredibly fast, perhaps supersonic?
Top

The 1.6-litre V6 turbo-supercharged ICE/engine part of the present power unit design is a first in formula 1 being designed to run as a turbocharged as well as a supercharged forced induction engine, two forced induction systems between which there are substantial design different needs.
Is RSCSR supplied image of pressure events of a well-tuned racing engine pertains to a forced induction or a NA engine?.
GG’s image of instantaneous cylinder pressure of the Wright TC engine doesn’t say of which of the at least 15 variants of the 2200 to 3700 HP it belongs too. The R-3350 3700hp two stage supercharged engine had three exhaust driven turbine from six cylinders exhaust with each turbine being geared to the crankshaft through a fluid coupling.
Top

isn't the F1 engine a turbo-compound engine not a turbocharged engine ?

the pressure plot is from the Wright brochure
like the 1954 paper this predates the later TC that had 7.2 CR and improved DI - for this no bsfc figures seem to exist
1954 paper gives energy balances at TO and at max sl endurance (hence my 100 hp recovery - airline cruise 240 hp recovery)
the bsfc everyone quotes is for the earlier TC engine with 6.7 CR
all DCs and TCs were 115/145 fuelled
Top

you're saying the F1 PU can't use concurrently in MGU-K motor action electrical energy produced in MGU-H generator action
it can
exhaust recovery turbine powered G-H to M-K (electrical to mechanical) energy transfer gives second expander action
(the piston being the first expander)
having a second expander (downstream of the piston expander) is what makes the PU a compound engine
the Mercedes efficiency claims of c.50% are made on this basis - ie sustainable power vs fuel heat rate
any other basis would be false
how can these engines not be classified as some kind of compound ? (eg a part-time compound)

people should move beyond Wikipedia
Top