All that has to do with the power train, gearbox, clutch, fuels and lubricants, etc. Generally the mechanical side of Formula One.
100 posts

All photos below belong to @DawnTreaderEng who is Paul Morgan's son and was directly involved in the development of Mercedes-Ilmor engines. There are many more pictures on his twitter account - definitely recommend checking it out. 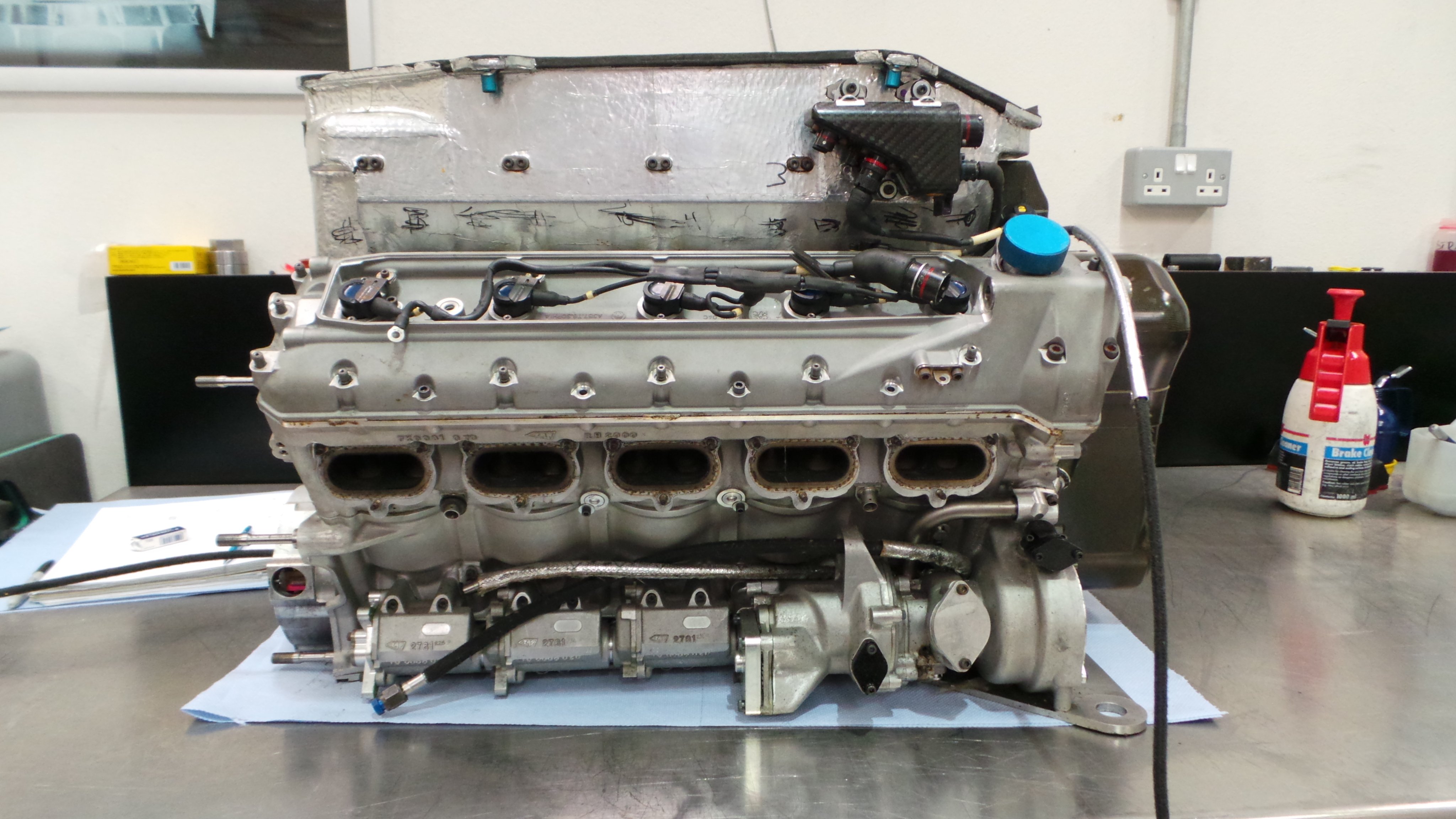 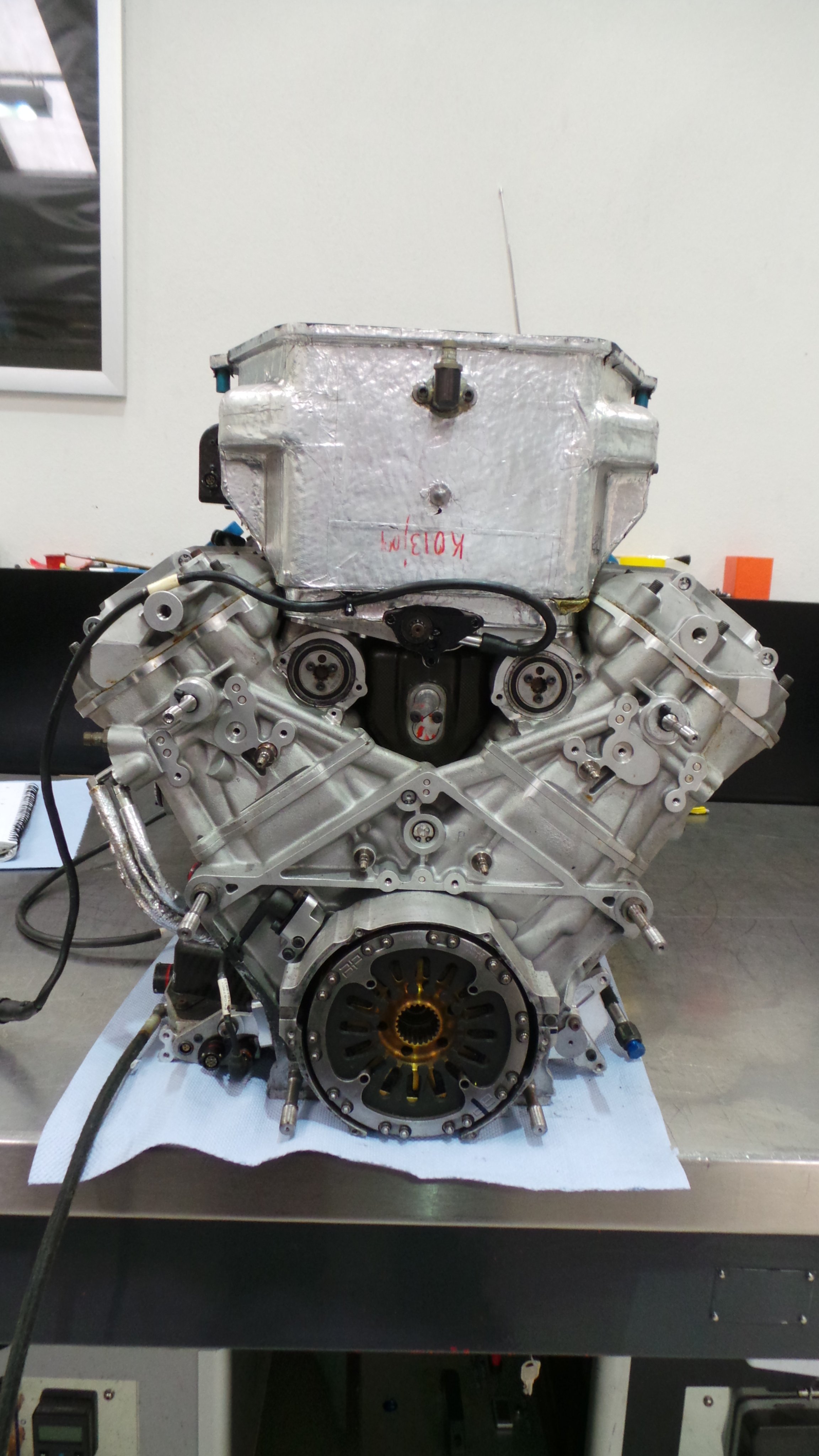 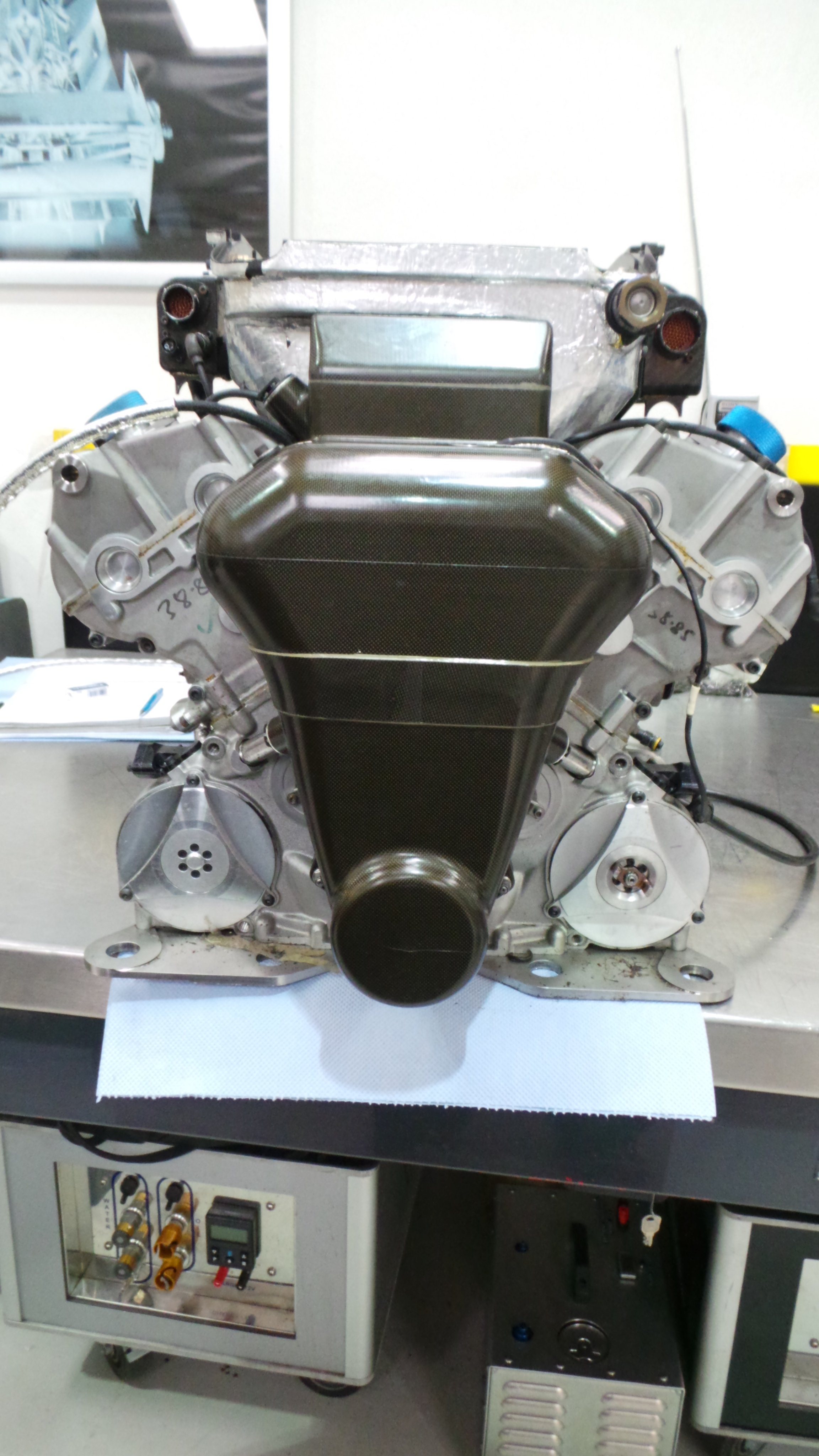 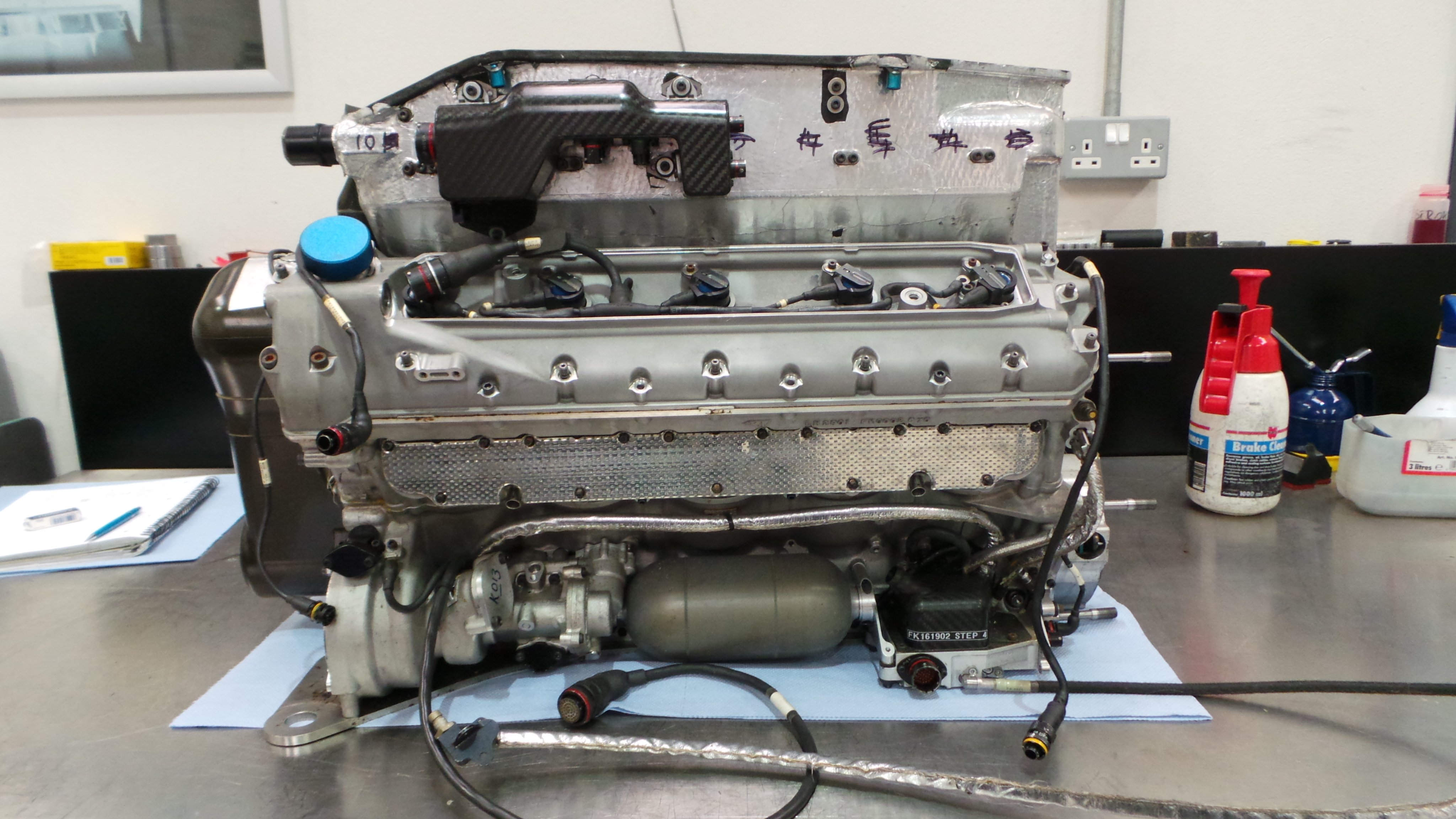 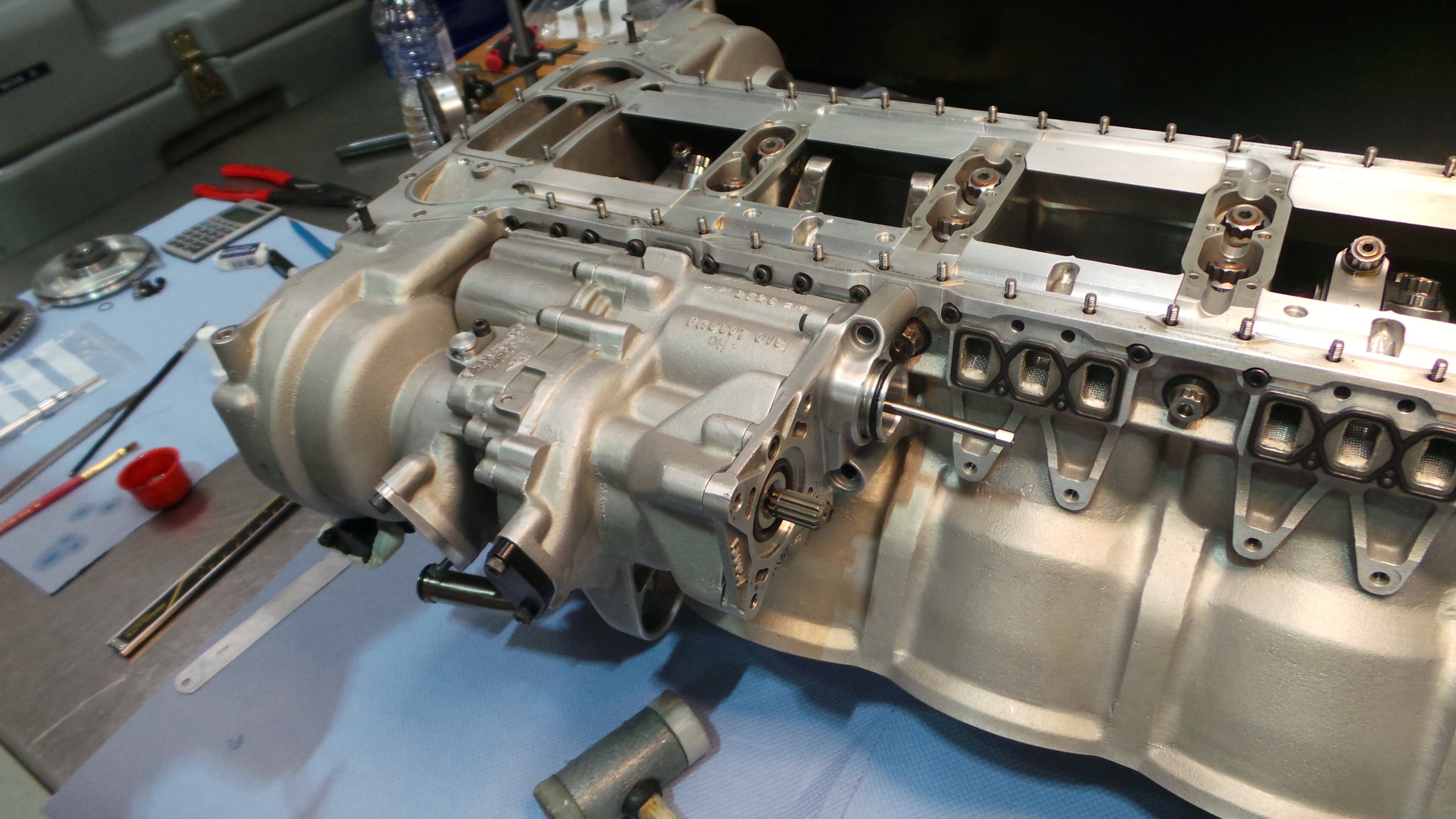 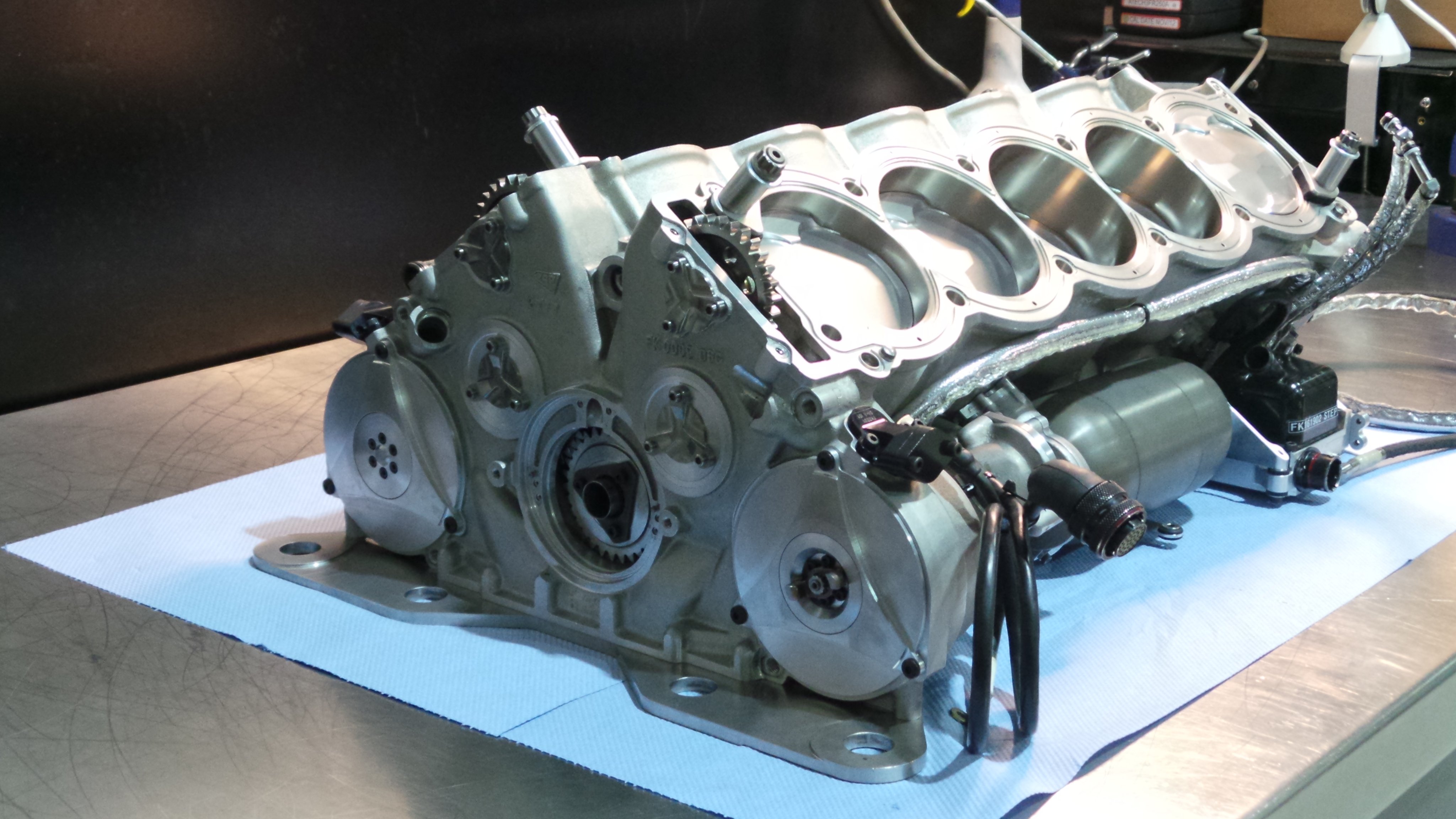 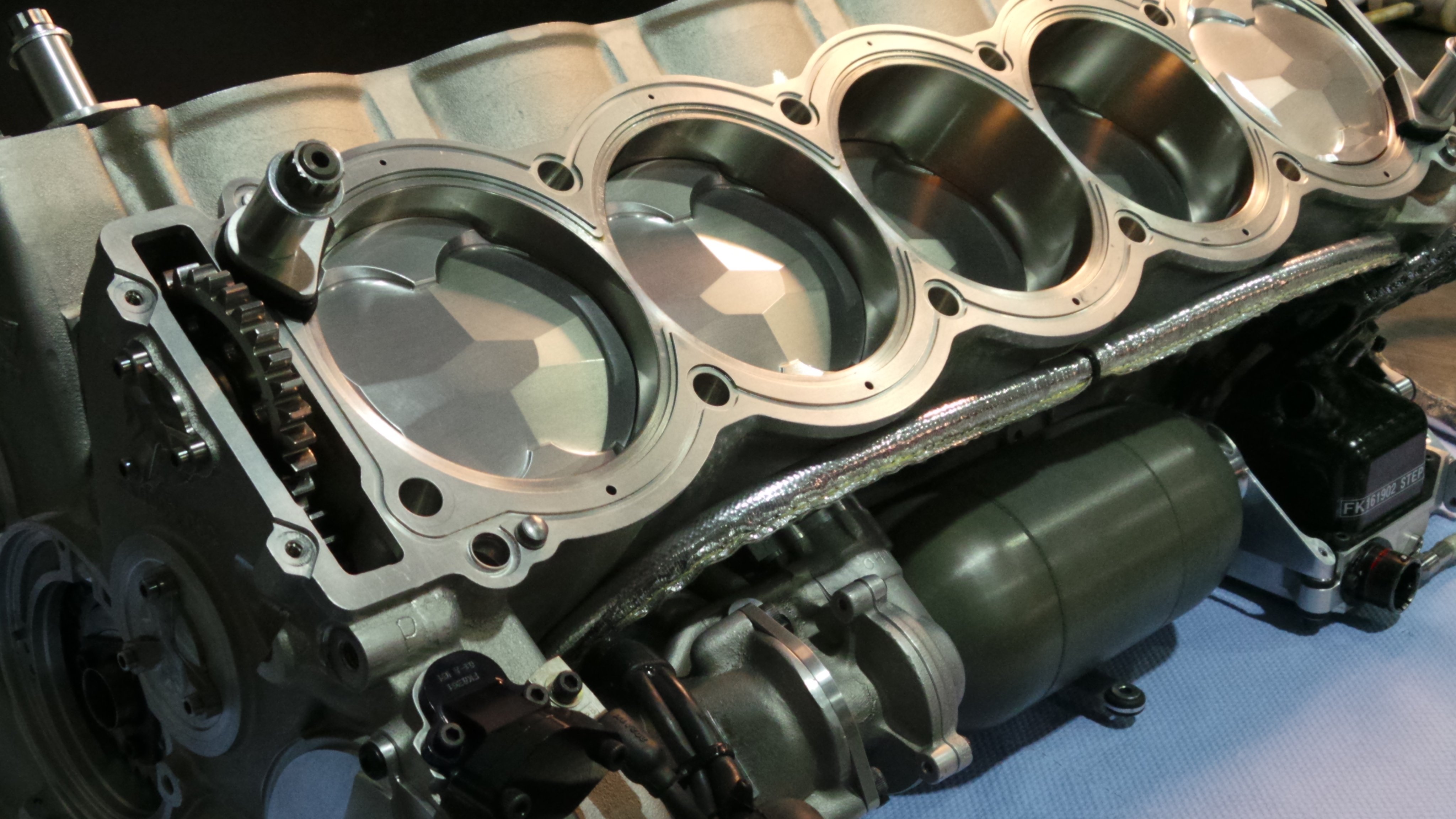 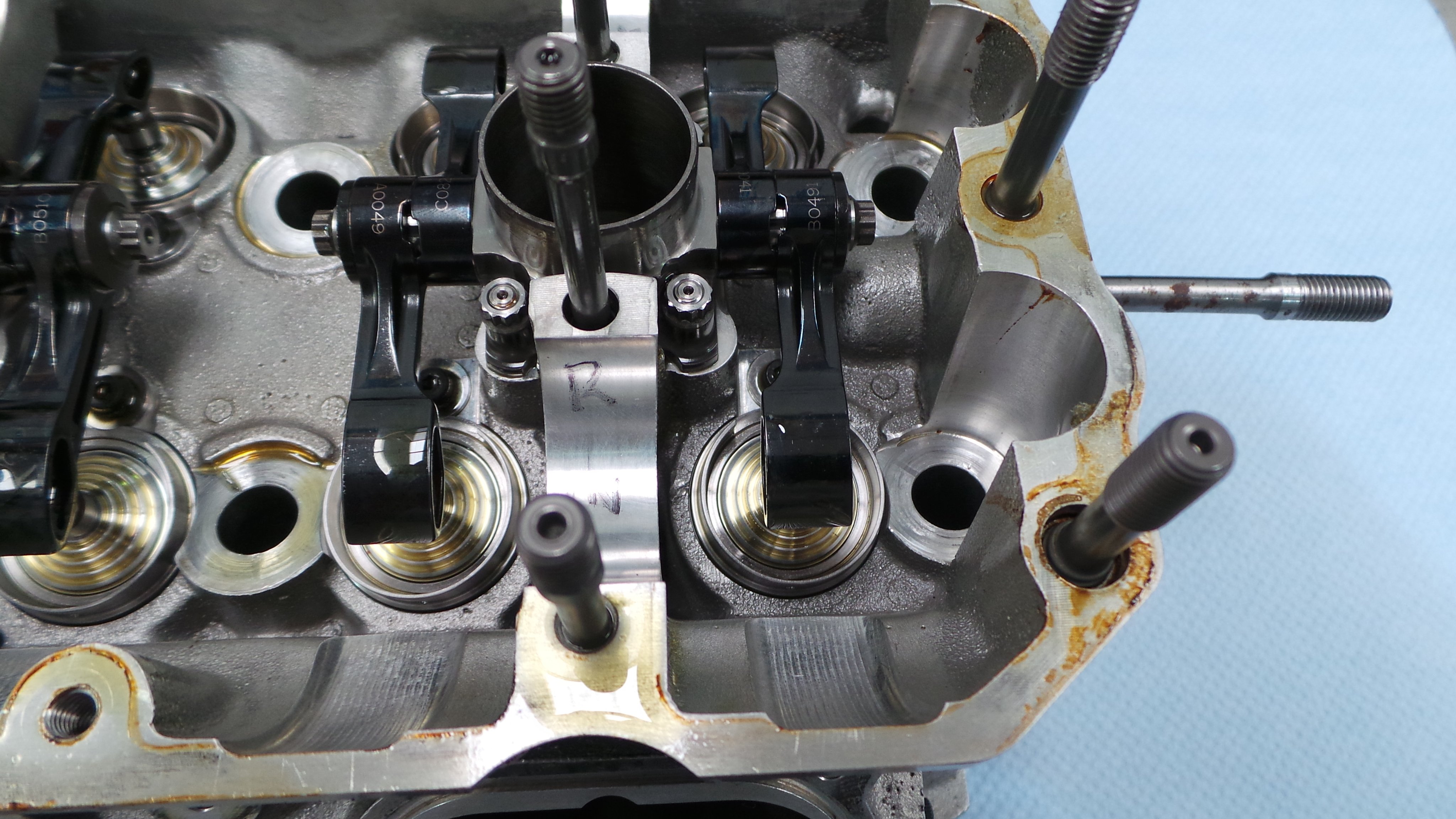 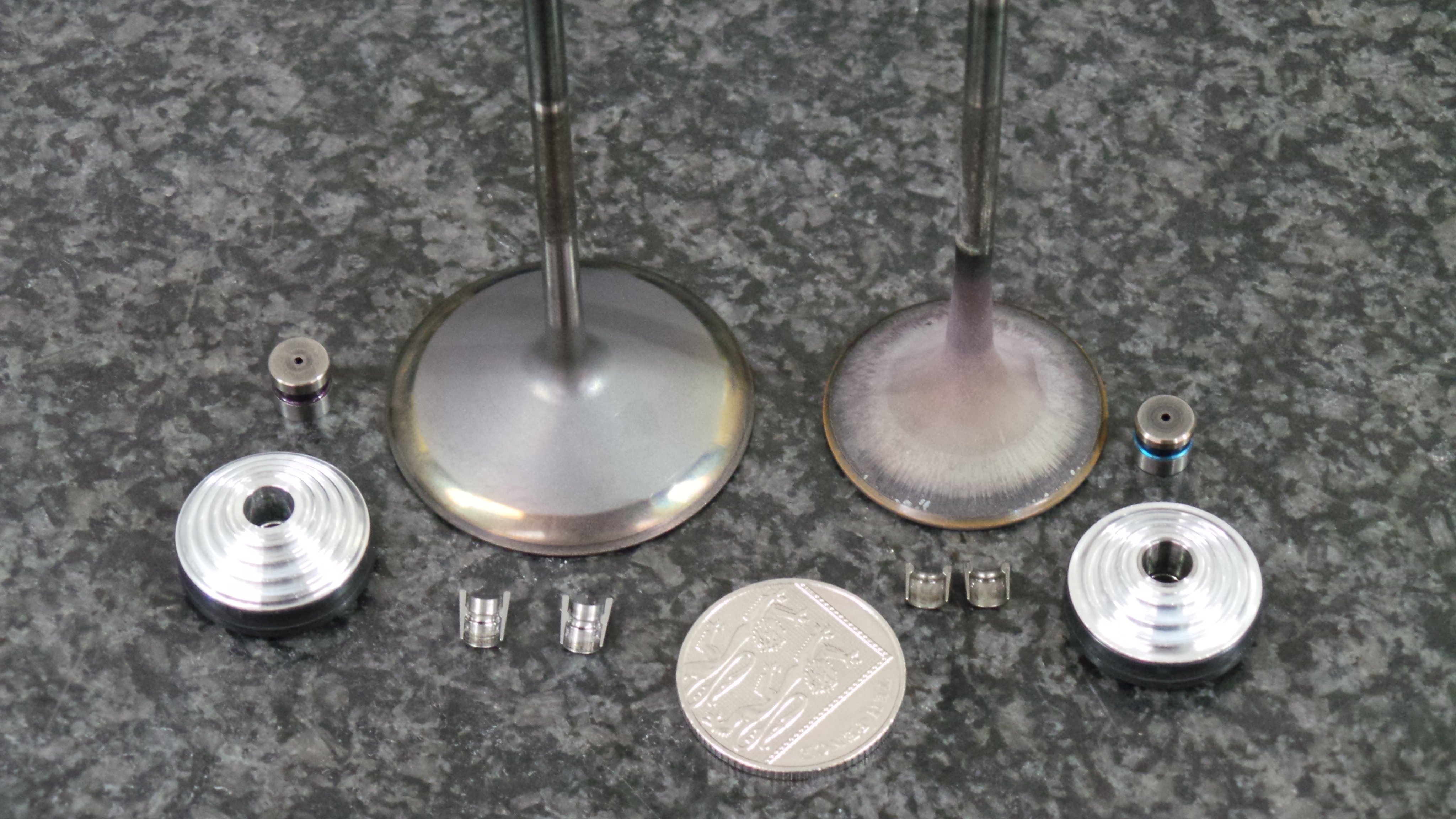 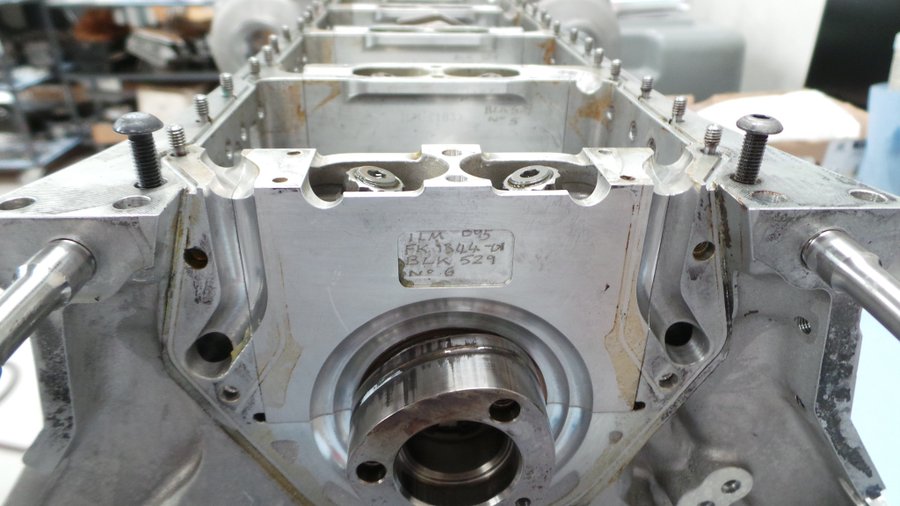 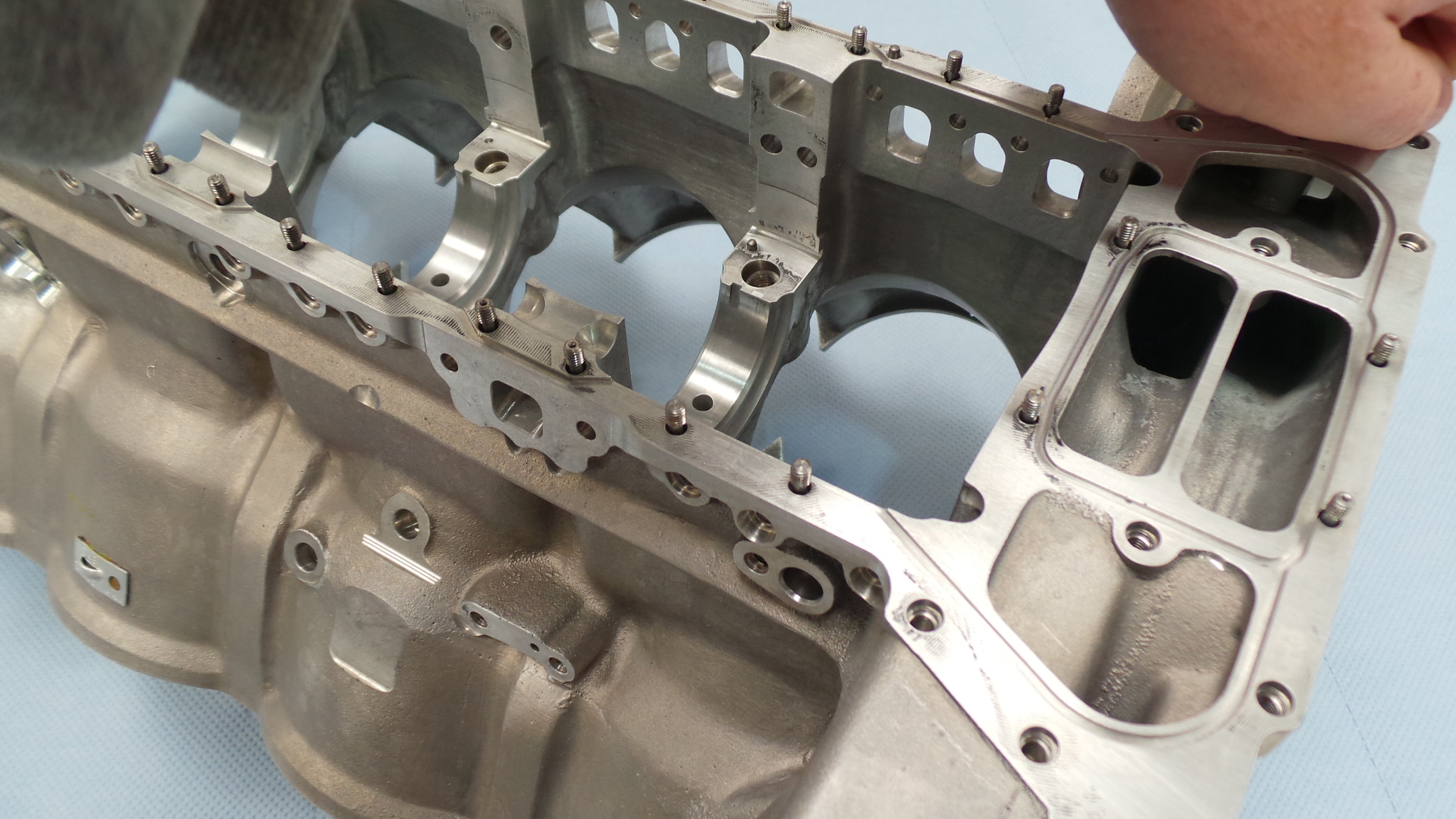 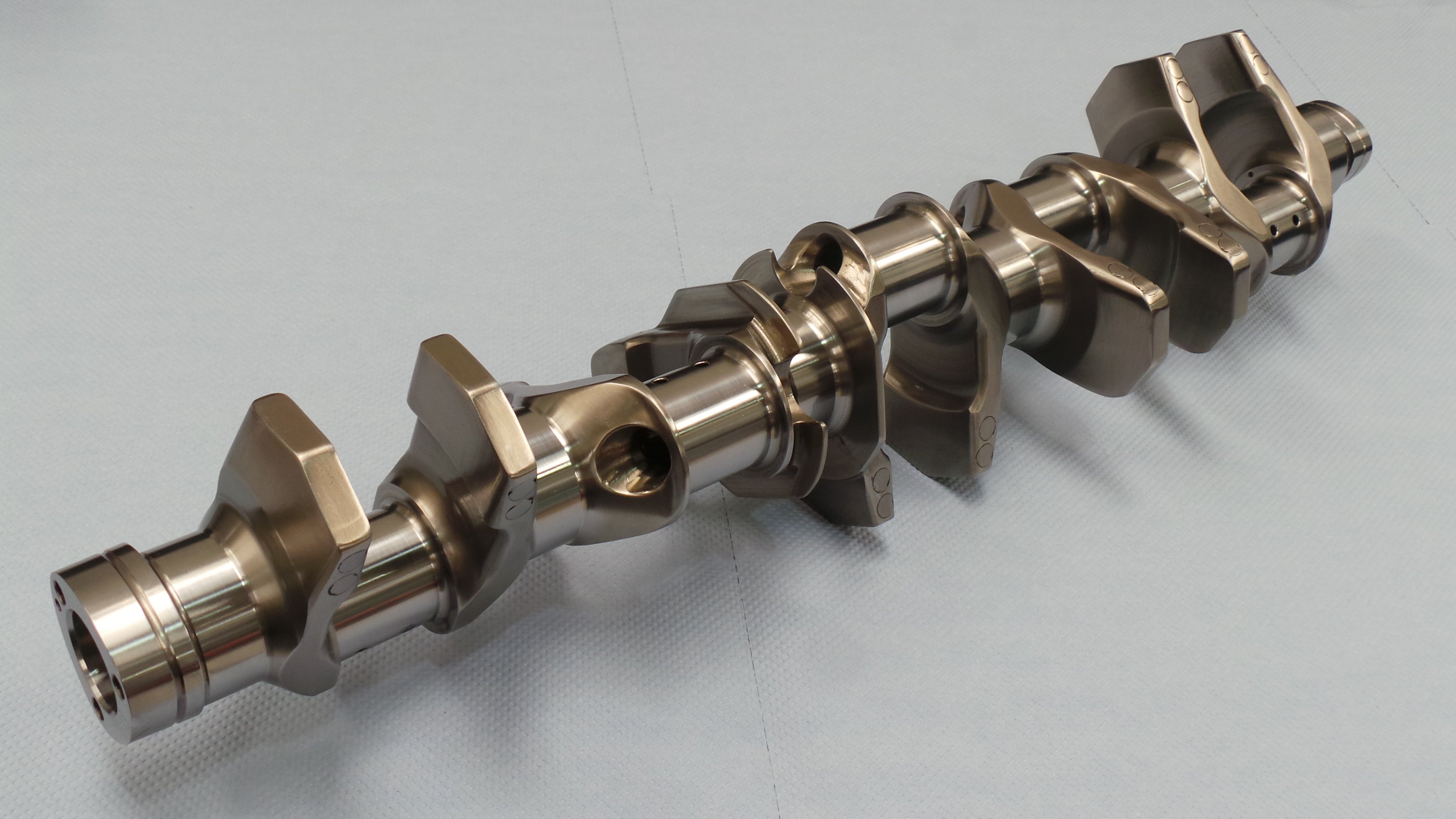 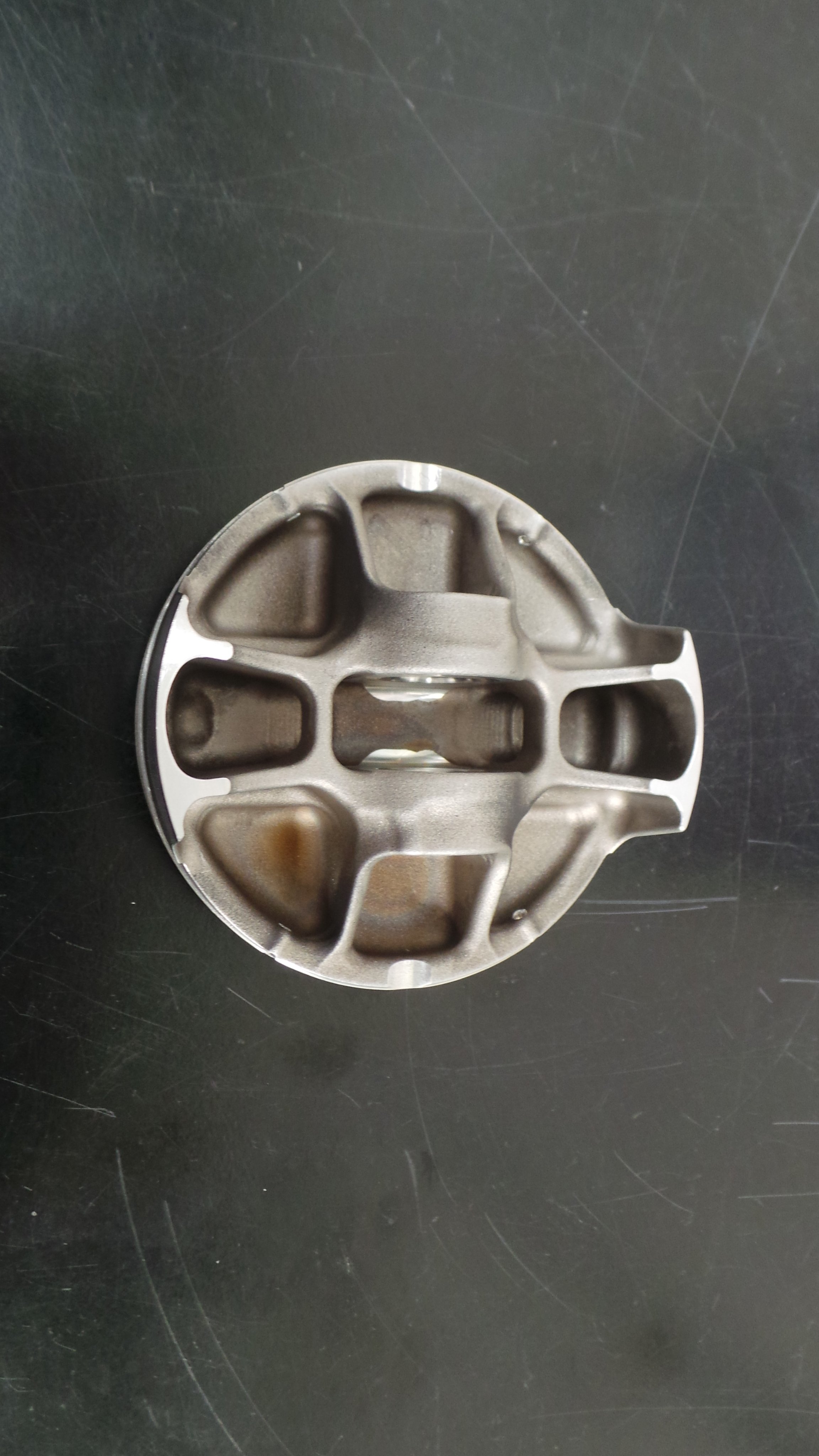 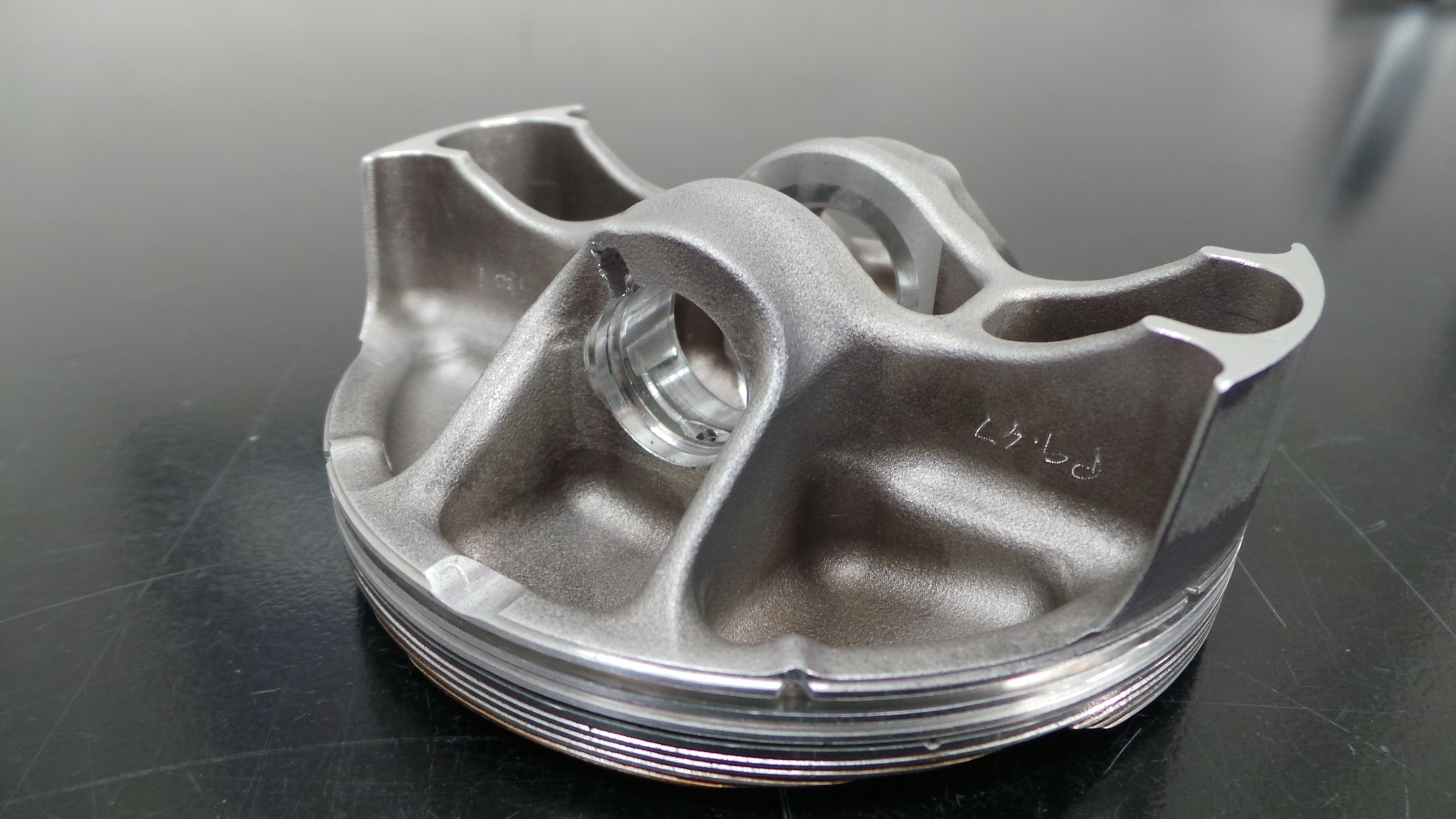 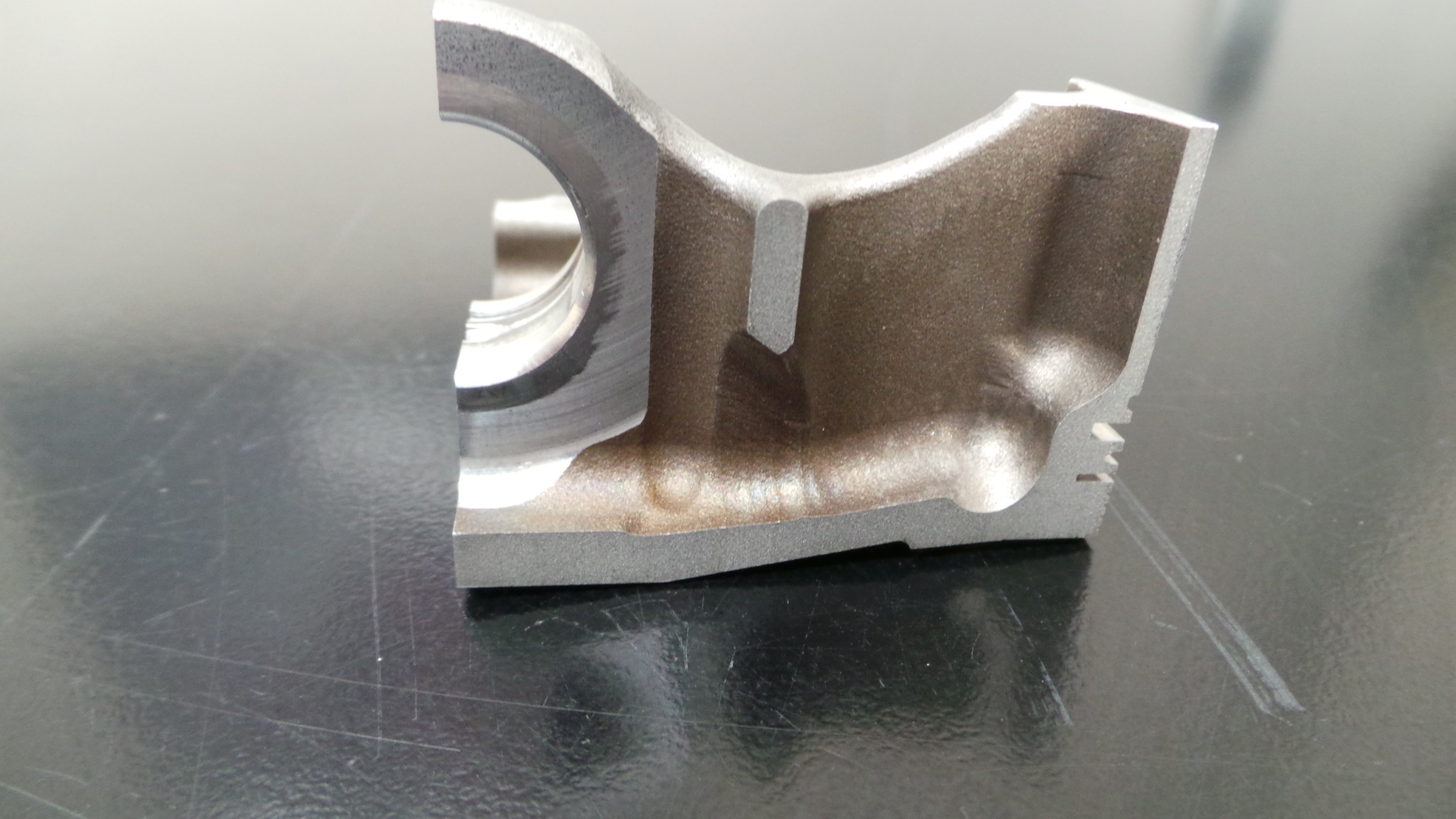 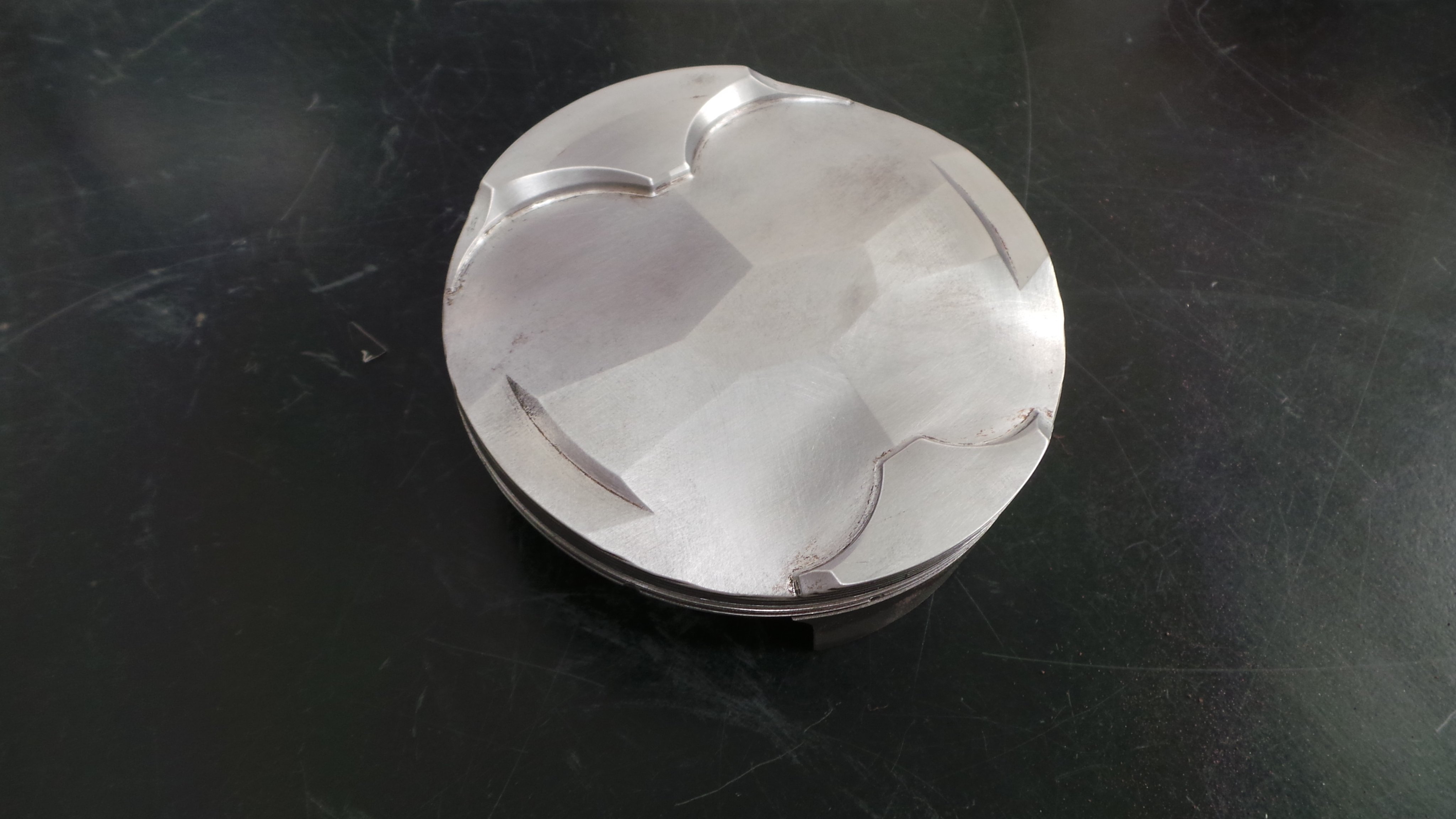 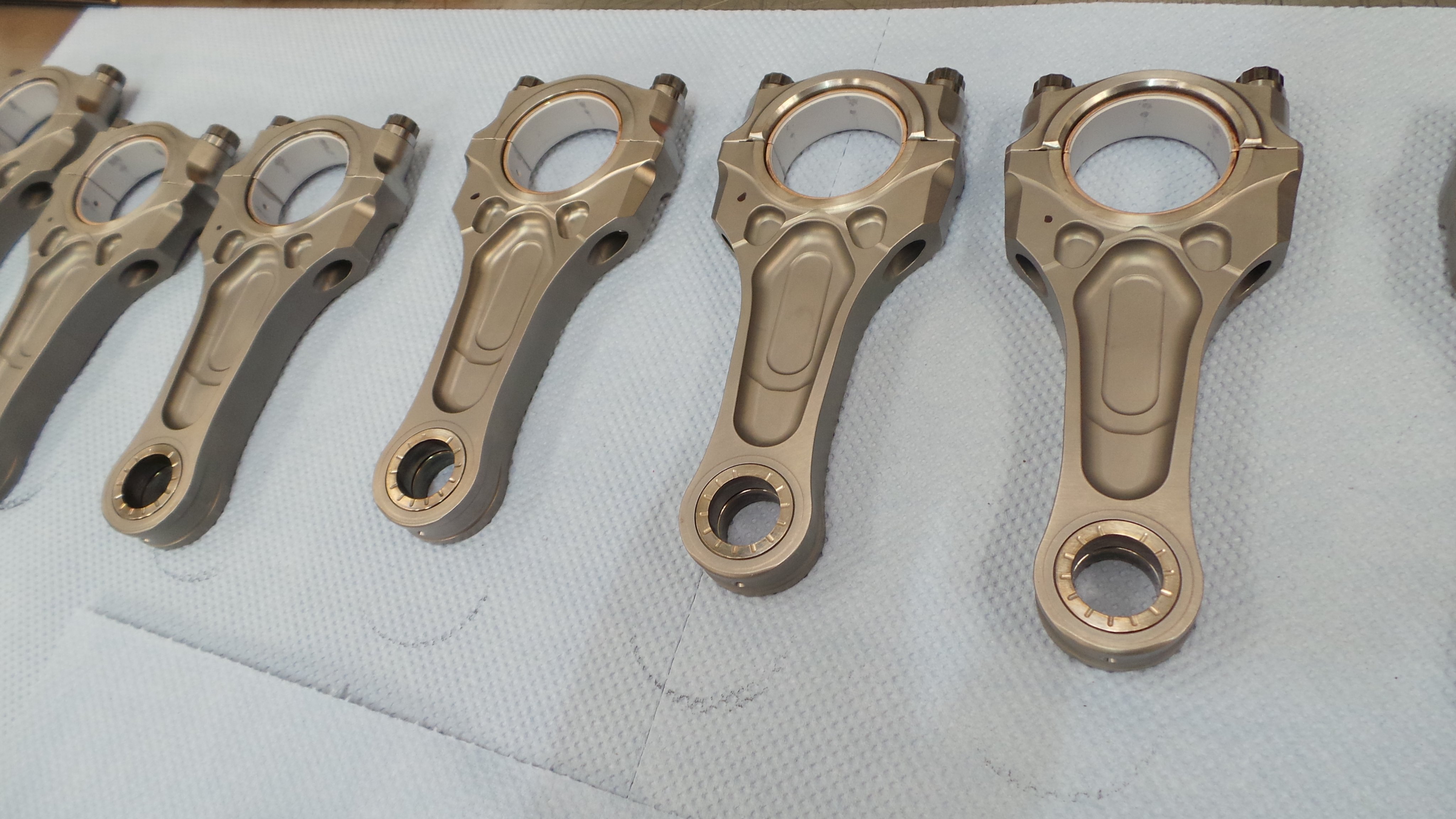 Thanks for posting those Mudflap.
Top

I have to ask

Why use studs and nuts instead of screws for the canted main fasteners?

Wouldn't you have to pull the studs to remove the caps?

Is it all a matter of eliminating the torque applied to the shank upon installation? Tension only?

Good observation Paul.
The aluminium crank case requires a coarse thread to avoid damage. The problem with that is with angle tightening, the larger pitch will create a larger change in tension for a given change in angle (more sensitive to angle).
Using a stud allows a coarse thread in the crankcase and a finer thread at the nut. The pitch of the nut thread then controls the stud elongation when angle tightening.
Top

does he say the bore of the piston ?

Good old times. Thats their first 90° design right? IIrc Merc was somewhat late switching from 72° to 90°.
And in hinsight it would be interesting to know by what extend Merc was hit by the beryllium ban ...
Top

i just friendly asked dawn treader eng at twitter and he replied me 95mm for the 2001 fk ilmor . if this is true i,m surprized because bmw and honda had also 95mm , ferrari had 96 az 2001 season.

If dawn trader is correct that bore was 95mm, stroke was 43mm (2998cc).
The effect of beryllium pistons being banned is best summed-up by back than Adrian Newey of mclaren;- ‘The power we had in 2001 was no more than the power we had in 1998’.
Top

its very interesting because we first time get a bore spec ilmor never published .

the next interesting part : i had always a guess ilmor war lower bore / higher stroke to achieve better midrange torque . but the higher stroke sets a hard limit in piston speed and accleration due to material strenght so your rev limit is lower - in an atmo so is the top end power.

they did the trick with be/al so they were able to rev the same as other top teams due to the berrylium pistons but had a better midrange due to higher stroke.

that worked until be/al was banned , after this they struggled to keep up with revs and top end having a higher stroke.

now we get the info the ilmor 2001 had the same bore and stroke as the bmw and honda had ?
Top

The Mercedes-Ilmor in question is being said it had a bore of 95mm. a 95mm bore with a capacity of 2998cc results in it having a stroke of 43mm. The power advantage the Mercedes –Ilmor had over FERRARI TIPO 049 was the ability to match the RPM of the TIPO 049 with a longer stroke. A longer stroke requires a smaller bore to maintain cubic capacity. The TIPO 049 attained a capacity of 2997cc with a bore of 96mm and a stroke of 41.4mm. when the beryllium pistons were banned the long stroke RPM advantage of the Mercedes-Ilmor was also gone.
Top

you are fully correct about the TIPO 049 with a 96x41.4 dimension as well the benefit of a larger stroke was over with the ban of be/al

what is an eye opener : i always believed the 2001 FK ilmor was in the 93.5-94 range and struggled to keep up with the sudden ban of be/al having a larger stroke without possibility to design a new engine 'overnight' .

this are very interesting news
Top

@ ACRO. Thanks for the stroke correction.
Ilmor/Mercedes –Ilmor bore and stroke. The following might be of interest to read.
(Akira Akagi, owner of Leyton house formula one team stepped forward as baker) Ilmor 1991 2175A 3498.7CC 72-DEGREE V-10 had wet nikasil aluminium liners with a bore of 86.6mm and a stroke of 59.4mm with number of main bearings being ‘undisclosed’. Mario Illien started design work early in 1989. With at first having schemed a V12, putting quite a lot of work into this configuration. ‘‘I didn’t feel that eight cylinders was the right way to go, due to the size of each cylinder and the inherent vibration problem, having looked at schemes for a twelve, I concluded that ten cylinders was the best compromise in terms of size, weight, packaging and fuel consumption’’. ‘‘I have chosen a bore size that represent a compromise between the need for adequate valve area and consideration of the mass of the piston and its diameter, the latter seen in terms of burn-rate’’.
Mercedes-Benz FO110F. The 3.5-litre V-10 engine produced by Ilmor for Sauber had been in effect, a short stroke version of the 2175A, with dimensions of 92.2mm bore and 52.4mm stroke. The 2175B was used by Sauber through to the end of 1994, with support from Mercedes-Benz. For 1995 Sauber switched to Cosworth as the Ford factory team. While Mercedes started a partnership with mclaren, becoming its official factory team. Ilmor was commissioned by Mercedes to produce mclaren’s 3.0-litre V10 engine and in due course Mercedes become the majority owner of Ilmor. The bore and stroke of the F0110F were not disclosed. Illien did admit that the bore of the previous 3.5-litre engines had grown from 86.6mm to 92.2mm as peak power speed rose from 12600 to 14000RPM.
1997 F0110F 3000CC 72-degree V10. bore and stroke undisclosed. Aluminium wet cylinder liners. 6 main bearing end fed oiling crankshaft. The lower crankcase-cum-sump formed the six main bearings caps. Inverted bucket tappets.
After encountering piston problems and Nikasil cylinder coating problems, Ilmor contracted-out the piston forging and machined the pistons in-house. They also Nikasil coated their own aluminium wet cylinder liners in-house.
Top

very good information , thank you much !!!

i think ilmor had some very great ideas , e.g not separate but common liners where two cylinders share one wall thickness ( at least in 2001 ) and the general idea to keep the bore lower than competitors to push midrange torque and reduce ring friction .

thats why i,m stunned to hear the 2001 ilmor had 95mm bore . it was exactly what major engine manufacturers ran in 2001 ( bmw , honda , cosworth ) and 1mm lower than ferrari which appears to had the most extreme b:s ratio in 2001.