Post here all non technical related topics about Formula One. This includes race results, discussions, testing analysis etc. TV coverage and other personal questions should be in Off topic chat.
5 posts • Page 1 of 1

The incident today with Perez sort of running over Ferrari's pit crew gear got me thinking:
Are electric wheel guns viable in F1?

I mean, with all the PR talk about F1 getting more eco friendly, wouldn't this be a positive change?

I don't know the specs of the current equipment, like torque and all that stuff, and I'm aware that it would most likely result in heavier, slower guns and increase stop times, but if it is the same for everyone, then why not?

It would cut down on costs by not having a large amount of equipment for each pit crew to power the 4 guns with pressurized air that they have to transport, assemble and disassemble for each grand prix, as well as uncluttering the pit lane.

Unless of course there is some specification on the way that the wheel guns work that electric equipment cannot fulfill, in which case I'd like if someone could clarify.
Top

Yes, they are viable. Formula 2 already use electric wheel guns. For example, from yesterday's feature race: 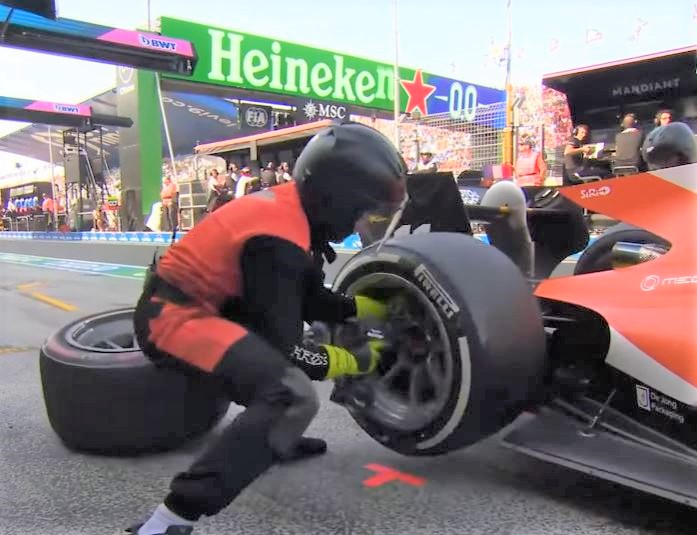 You are taking about battery operated Wheel guns, instead of corded electric wheel guns.
Top

mendis wrote: ↑
Mon Sep 05, 2022 2:52 am
You are taking about battery operated Wheel guns, instead of corded electric wheel guns.

I hadn't considered corded electric impact wrenches until recently, they don't seem very common. I'm guessing they combine the worst of both worlds so are not favoured -- the inconvenience of a cord, without the (presumably superior) power of an air-operated impact wrench?

However, a quick Google seems to suggest that electric impact wrenches do not exist in 1" drive or 3/4" drive in cordless form, but only in corded form.

This would suggest that corded electric impact wrenches are more suitable for heavy work.

The Formula 2 teams must be using some kind of 1/2" drive cordless impact wrench that is particularly suitable for the job (speed, of course, being the number one consideration!), unless I am mistaken (which is very likely!).

...What is the torque value for a Formula 1 or Formula 2 single wheel nut by the way?

Yes, they are viable. Formula 2 already use electric wheel guns. For example, from yesterday's feature race:

Didn't know about that. So that answers my question.
(BTW by electric I meant battery powered)
Top
5 posts • Page 1 of 1