All that has to do with the power train, gearbox, clutch, fuels and lubricants, etc. Generally the mechanical side of Formula One.
67 posts

Every F1 car on the grid is capable of going from 0 to 160 km/h (100 mph) and back to 0 in less than five seconds. During a demonstration at the Silverstone circuit in Britain, an F1 McLaren-Mercedes car driven by David Coulthard gave a pair of Mercedes-Benz street cars a head start of seventy seconds, and was able to beat the cars to the finish line from a standing start, a distance of only 3.2 miles.
Top

The acceleration and braking sounds plausible.
"It could be done manually. It would take quite a while, but it could be done. There is however a much more efficient and accurate way of getting the data. Men with lasers." Wing Commander Andy Green
Top

For a 700 kg car, this means a mean propulsion-force of 7780 N, not bad considering limited aerodynamic downforce. Moreover, as xplained on another thread, gravitational-load won't change that much from front to rear due to the
xtremely low CoG, estimated at 150 mm from the ground only.
"I spent most of my money on wine and women...I wasted the rest"
Top

roost89 wrote:The demonstration is true, that's for sure. It's on the internet. There're quite a few of them.


Thanks for those. You don't normally get to see how fast an F1 car is, because they're racing each other. When you see that little speck flash past the big road cars you think OMG...

They all had very similar direction - I wonder who was first?
Top

richard_leeds wrote: Thanks for those. You don't normally get to see how fast an F1 car is, because they're racing each other.

If you are standing in the grades rather than in front of the TV, well... thats enough to experience how fast they are. Even if there is only 1 car running.
"You need great passion, because everything you do with great pleasure, you do well." -Juan Manuel Fangio

Actually IMO acceleration of an F-1 car (at least at 0-100kph) is not that outstanding. There are quite a few supercars (Begatti, Koenigsegg, Enzo) that are quite close.
But no land vehicle decelerates and turns comparably!
Top

timbo wrote:Actually IMO acceleration of an F-1 car (at least at 0-100kph) is not that outstanding. There are quite a few supercars (Begatti, Koenigsegg, Enzo) that are quite close.
But no land vehicle decelerates and turns comparably!

Not really, only the veyron comes close, and that's due to awd. And in 0-60 times, a tenth is a huuuuge difference.
Alejandro L.
Top

Although a Formula One car has to begin from a standing start, and also has to perform pit stops, the drivetrain is not optimized for low speed acceleration. The clutch is tiny and fragile. The lower gears, especially first, are set to provide performance when the car is rolling. For instance, if the slowest hairpin in a track is 60 kph, then that's what first gear is designed to deal with.

I could build a VW bug to beat a Formula One car in the first twenty meters. But, as soon as the tires hook up and the engine comes into it's powerband, a different story.

If you truly wish to gauge the performance of a Formula One car, don't do the 0-100 thing, but rather 100-200 kph.
Racing should be decided on the track, not the court room.
Top

We've posted the acceleration of an F1 car during a lap around Melbourne: the speed vs time curve was obtained from the analysis of the sound of the engine, by Reca (how we miss Reca around this site!). You can measure the speed, take the time it takes to achieve it and deduce the acceleration (sorry for reposting the image, but I know of no other precise source but F1Technical for this):

Speed vs time for Fisichella

Power to the wheels simple calculation: check the acceleration at row 11

However, even from a standing still departure, the acceleration of an F1 car is ridiculously low compared with the one of a dragster. In order to accelerate at 330 mph (that is, 530 kph) in less than 4.5 seconds, a regular dragster has to achieve 4.5 Gs, that is, 44 m/s2.

The deceleration of a dragster is also larger than the one of an F1 car: once you deploy the parachutes and brakes, you have to resist 4 Gs (39 m/s2), more than a space shuttle astronaut during reentry. No Brembo carbon fiber brakes can provide you with the same decceleration, no matter what the forum says. In order to achieve 200 mph (320 kph, in euros) in the first half of the race, a dragster needs to achieve 8 Gs during the launch.

A rocket dragster, the most extreme dragster constructed in the history of mankind, will give you 0-160 kmh in 0.5 seconds. That means you have to stand a brutal 9 Gs when you drive that kind of car. Try to better that, Mr. Coulthard!

A rocket dragster, free from the constraints of traction through the wheels, reaches 386 mph (that's around 620 kph) in 3.58 seconds.

So, before bragging too much about F1 being the pinnacle of racing, perhaps a little taste of "humble soup" would be adequate.

), altough, as many of you could very quickly point out, "straight-line acceleration is probably the first aspect of automotive performance that any intelligent driver gets bored with." Sure, but what about spectators? I'm never bored with drag racing. I quote from the link:


Putting all of this into perspective: You are driving the average $140,000 Lingenfelter twin-turbo Corvette Z06. More than a mile up the road, a Top Fuel dragster is staged and ready to launch down a measured quarter-mile as you pass. You have the advantage of a flying start. You run the Vette up through the gears and blast across the starting line and past the dragster at an honest 200 mph.

The "tree" goes green for both of you at that moment. The dragster launches and starts after you. You keep your foot down, but you hear a brutal whine that sears your eardrums, and within three seconds, the dragster catches you and beats you to the finish line, a quarter-mile from where you just passed him. From a standing start, the dragster spotted you 200 mph and not only caught you but nearly blasted you off the road when he passed you within a mere 1320 feet.

That's why I also grunt every time somebody talks bad about women racers: the amount of female top level competitors in NHRA history is astounding. They can beat an F1 car (probably giving more leeway than the one that Mr. Coulthard gave to the puny Mercedes he confronted).

A dragster engine is a marvel of mechanical engineering. With 3000 cubic feet for minute ramming into the engine, the cylinders are in the verge of hydraulic lock: the fuel is almost "solid" when it enters the combustion chamber.

So, I highly recommend any of you to NOT consider your driving education finished until you have attended an NHRA race. Same goes for track designers: you will never learn to build a perfect road until you measure the flatness of a Top Fuel track. Nothing else but an absolutely flat track will do: even the most minute imperfection can make a cylinder to explode, and I'm not making this up.

In the end, sure, adam2007, an F1 car will give you a respectable acceleration: once you achive around 200 kph, the necessities of modern F1 racing (that is, the excessive downforce) won't take you far in that respect. Besides, I bet you that the eves2007 of NHRA can beat a Formula One car any day of the week (probably in a Funny Car, no need to use a Top Fuel Racer, the absolute dominant branch of motorsport in straight line acceleration).

This woman beats Coulthard in, oh, so many levels... 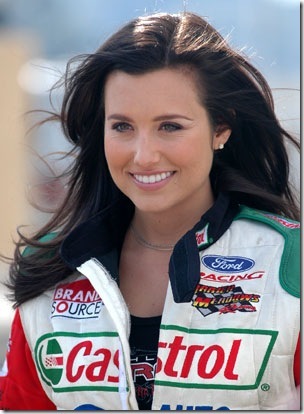 Yeah, yeah, rant as you wish about how to take a curve... I take Ashley Force over Lewis Hamilton, Michael Schumacher or Fernando Alonso any day of the week.

Conlusion: Your "B21" of no more than 255 kW to the wheels is not really credible. While you have based the pure accelleration energy on m*a*s, I think you got the "B12" all wrong, with an average speed of 190 km/h, you should
perhaps cover a little more than 133 m in 4s?

And think about it, what do you want with a 740 Hp engine if you are only going to use half of it?
"I spent most of my money on wine and women...I wasted the rest"
Top

Xpensive, I honestly think that the weight of the car includes everything, Fisi, fuel, even the sponsor stickers; that's what ballast is for. Actually, an F1 car is incredibly light: without ballast would be even lighter than 500 kilos, I "guesstimate".

The difference between the crude estimate I made between nominal power and the "real one" has not been fully explained, as you cleverly point out. I think of three other possible causes:

1. I got the equations wrongly, or the coefficients are "misunderestimated", like George W.

2. The area is wrong (that's a better possibility, if you ask me... "I'm never wrong, and when I'm wrong, I'm enchanting", as the mexican song goes

See the appropriate thread for the discussion about the frontal area being about 10% larger. Actually, with all the 3D drawings of an F1 car posted by the members, that should be an easy one to check.

3. The power stated in the "fact sheets" for the public, is the max power, at a definite rpm: for the rest of the power curve, the engine gives less power.

However, definitely, emphatically, the acceleration is well calculated.

X, tomorrow I'm going to move your post and this answer to the thread where all this was discussed, if it's fine with you (I'm not doing it right now because it could seem I'm doing it to "cover" my mistakes in a very "anti-engineering way": actually, I posted the estimate to provoke original thinking, the opposite).

Let's keep this thread about the acceleration of a car from 0 to 100 or 160 km/h, as adam2007 intended, not about power to the wheels (still a mistery to me). Any other comments about power will be moved to the thread on power.

However, I will give you some leeway: any comments about the beauty of Ashley Force will be considered to be a homage to acceleration of a race car (... and of my heart, when I see her

Ciro Pabón wrote:The deceleration of a dragster is also larger than the one of an F1 car: once you deploy the parachutes and brakes, you have to resist 4 Gs (39 m/s2), more than a space shuttle astronaut during reentry. No Brembo carbon fiber brakes can provide you with the same decceleration, no matter what the forum says.