Some quite nice detail photos can be found here.

and one from the complete quick change front end.
(back in the days engine change in ~10 min, during the break between the two races)

there where around 10.000$ worth of quick couplings on this car Last edited by mx_tifoso on Fri Jan 21, 2011 7:12 pm, edited 1 time in total.
Reason: renamed title upon request. previously named "Detail photos of DTM/ITC Mercedes C-180 Class 1 (1994-1996)"
"Make the suspension adjustable and they will adjust it wrong ......
look what they can do to a carburetor in just a few moments of stupidity with a screwdriver." - Colin Chapman

Absolutely gorgeous car! Thanks for sharing!

Honest question, are you sure its a 180 though? Having a 1.8 or 2.0 or whatever under the hood? I'm just curios if it really was called a C180, being a DTM machine, or if it's a typo?
Nothing is foolproof to a sufficiently talented fool...
Top

Very nice 747. Thanks for sharing!

More could have been done.
David Purley
Top 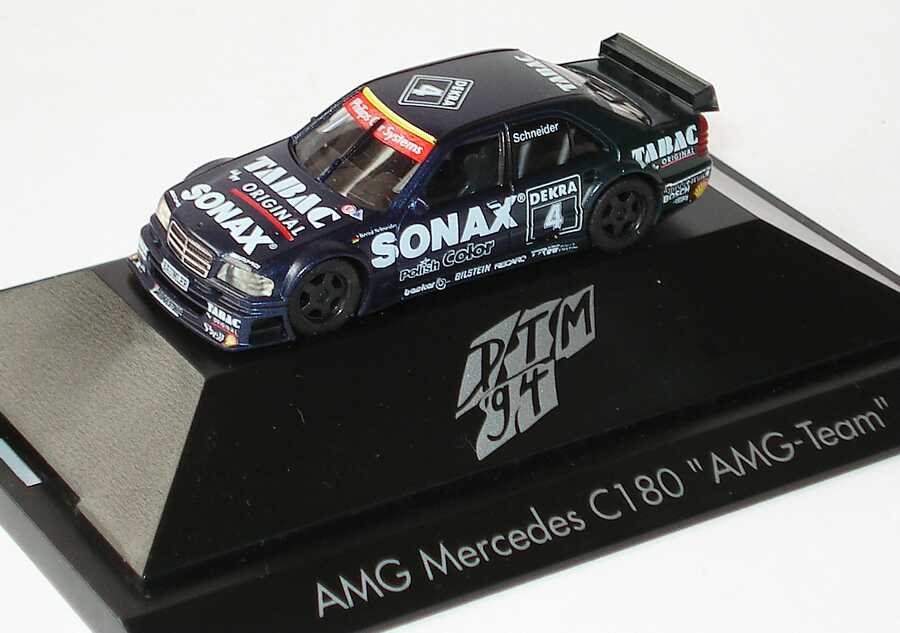 Does anybody has got the dimensions of that engine ? Looks very compact !

patrick morgan is the ownwer of the company DTperformance who restored that beauty.
Top

Thanks 747. Its hard to find images of some of the quick disconnects you mention, but you can see the big hex-drive screws that attach the front bulkhead to the frame here:

I this found on Youtube. The induction/engine noise is immense but these where the days of 2.5 litre inline 4s I believe. the C-class coincided with the ITC, which had regulation changes and a V6 and was also hugely more expensive. But then 747 built the damn things, so he would know all about that!

[youtube]http://www.youtube.com/watch?v=JIenLsbO ... re=related[/youtube]
More could have been done.
David Purley
Top

Formula None wrote:Thanks 747. Its hard to find images of some of the quick disconnects you mention, but you can see the big hex-drive screws that attach the front bulkhead to the frame here:

Sorry, maybe I did not expressed myself clearly.
I was refering to the dry-break quick couplings for the diverse fluids.
It´s not that they where anythig "special" but the shear amount of them, not only on the engine, in this car was staggering.

Back at the days it was mainly "Symetrics" & "Stäubli" couplings, similar to the ones used in F1 and other high end racing series, as well as in aircrafts.
The price of this stuff adds up pretty quickly

The 4 cones/hex bolts which where holding the complete front modul in place, where rather simple/cheap.

The two exhausts and the bellhouse/gearbox interface where connected via "V-Bands", similar to the ones used on turbos in WRC cars etc.

Thanks for sharing those pics.

Im thinking could that engine or a DTM engine go into a certain Honda RA107-05 chassis in another thread???
Twitter: @ESPImperium
BLOG: http://espimperium.wordpress.com
Top

in regards to the DTM/ITC engine in the RA 107
I posted some Opel Calibra V6 engines, which are up for sale.
They are compact and relative light ~90kg, so from this perspective would be o.k.
However, they main "problem" would be, that these engines are not designed to bear all the additional loads of a fully stressed engine in a open wheel car.
All the chassis/suspension loads in the old DTM cars are feed diectly into the chassis. And the crankshaft height would be higher then the one needed for a easy fit into the F1 Honda.
Also the DTM engines are quite high maintance 13000 rpm with concentional valve springs etc., so would not made for a "carefree" engine for such an application, The Zytek F3000 would be the better choice overall-IMHO.

As for the DTM/ITC Mercedes i4 vs. V6 question.
The FIA created Class 1 and Class 2 (2ltr. Supertouring Cars) for the 1993 season.
The class 1 cars, where to be used in the DTM. max. V6 with 2.5 ltr.
As Audi and BMW had left DTM for various reasons, the future looked a bit shaky.
And the new C-Class (C180/W202)from Mercedes was only launched during the year 2003 (May/June IIRC).
So Mercedes/AMG decided to bridge the 1993 season with a modified 190E class 1.
This car was based on the 190 Evo2 but had some aero modifications , and some upgrades on the engine. But it still used a 4 cylinder 2.5 ltr engine.
Bernd Schneider run a cra with fully active suspension, and won one race with it.
But in general, the old E190 could not hold a candle against the full blown Class 1 Alfa Romeo 155 with V6 engine and AWD.

For the 1994 season AMG developed the first proper Class 1 car, the C180/W202 shown above. This car had a 2.5ltr V6 but keeped the RWD layout.
The car won the championship in 1994 and 1995.
In 1996 the FIA created the ITC, based on the same technical rules as the DTM, and many of the traditional DTM/Gold Cup races formed the core of the new championship.
(Being a national championship, DTM could only have a limeted number of events not hold in Germany. For this reasons some of the foreign races e.g. Donington, Mugello etc, where part of the so called Gold Cup, but not part of the DTM championship)
Due to the oversea races (Japan/Brazil) amd the open technical rules, costs sky rocket, and ITC was left to die at the end of the 1996 season, when Opel and Alfa walked away from the championship.

The ITC was won by Opel with the Calibra V6, a car which also had AWD.
The car shown in the pictures is a fairly early model from the 1994 season.

The 1996 ITC car, was the one with all the cool "trick bits" like moveable ballast etc.
Nevertheless, the 1994 car had automatic ARB/swaybar adjustments and automatic controlled air outlets at the radiators, to adjust cooling/drag and downforce CoP during a lap as well as ABS and a driver Airbag (even the 190E Class 1 from 1993 had all these features).

What few know, AMG/Mercedes also developed a Class 2 (2 ltr. engine) version of the car, in case that DTM would have went belly up during the 1993 season.
But this car never raced/made a public appearance, and only a few people will ever see it, unless they decide to show it in the Mercedes museum one day.

After the dead of the ITC, AMG/Mercedes joined the new GT1 sportscar championship.
It dominated the championship, but withdraw from sportscar racing after the 1999 LeMans flips.

In 2000 the "new" DTM was formed and Mercedes races there together with Opel and the private Abt-Audi.
"Make the suspension adjustable and they will adjust it wrong ......
look what they can do to a carburetor in just a few moments of stupidity with a screwdriver." - Colin Chapman

I don't suppose we can make this a general DTM thread?

747heavy's recent posts led me to these photos of the Opel Calibra's engine and transmission:

Such a great series in that era, so much interesting development!
Top

Looks awesome. Didn't expect they ran so far back then. I'm still stuck at the late 80s-early 90s with still the 4i engines from BMW and Mercedes, as well as the RS500s !

The post on the other source is 2 years old, but is there any chance someone knows how to contact the guy who posted the pictures ? I would like to get more information about this engine, especially dimension sizes !

heres an engine bay of the 1996 ITC Merc, you can see it´s slightly different to the car shown in the first post. the main reason for the front drive layout in the Opel was to be able to place the engine more backwards in the chassis, for a better weight distribution.
The gearbox/front drive shown in your photo is from the later version, which used a geardrive (similar concept to Honda F1´s KERS drive), and worked.
The first version used a chain drive, which caused a lot of grieve during inital testing, as it would only last for a couple of laps.

If you compare the engine location of the Opel (look for the position of the airbox) with that of the Alfa (the other AWD car), you can see that the Opel engine is mounted futher backwards. Alfa run the engine complete in front of the front axle line, so that the drive shafts for the front wheels where located behind the engine. to round off our short excursion into the ITC/DTM class 1 touring car technology, some photos of the Alfa and it´s engine.