Here are our CFD links and discussions about aerodynamics, suspension, driver safety and tyres. Please stick to F1 on this forum.
205 posts

Hello everyone, as promised - here's some CFD work. Big thanks to jjn9128 for providing the base 2022 car model, as well as Vyssion for support and advice.

To examine the concept of F1-75, a base model was reworked and F1-75-like sidepods were added - let's call them tub-sidepods. Please note, the rest of the model is fairly generic and nothing except the rough idea of how F1-75 sidepods might work should be taken away from these results.

To begin with, let's examin iso and top views. The third picture is from a model without the tub, just a "flat" surface, almost like Aston Martin. 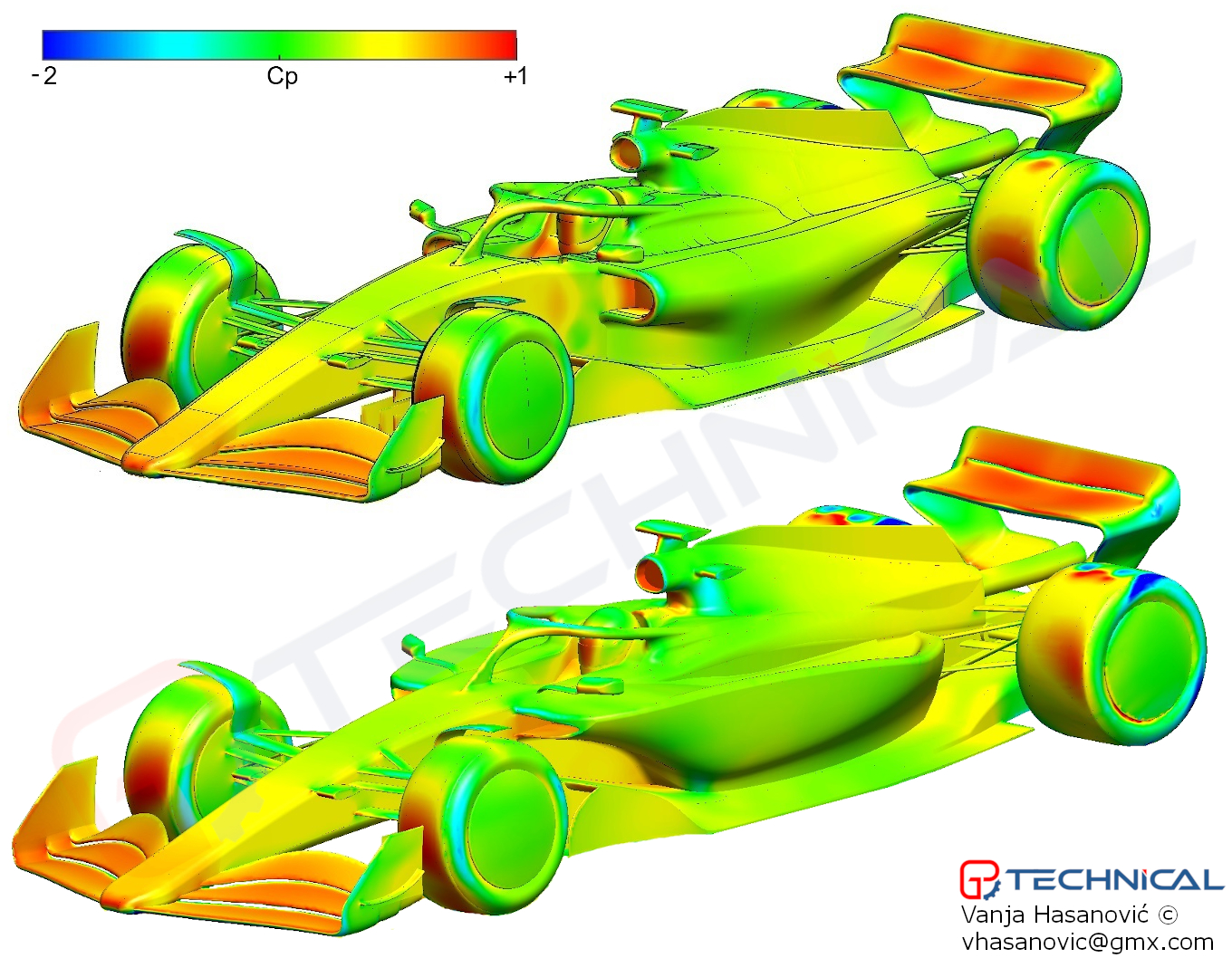 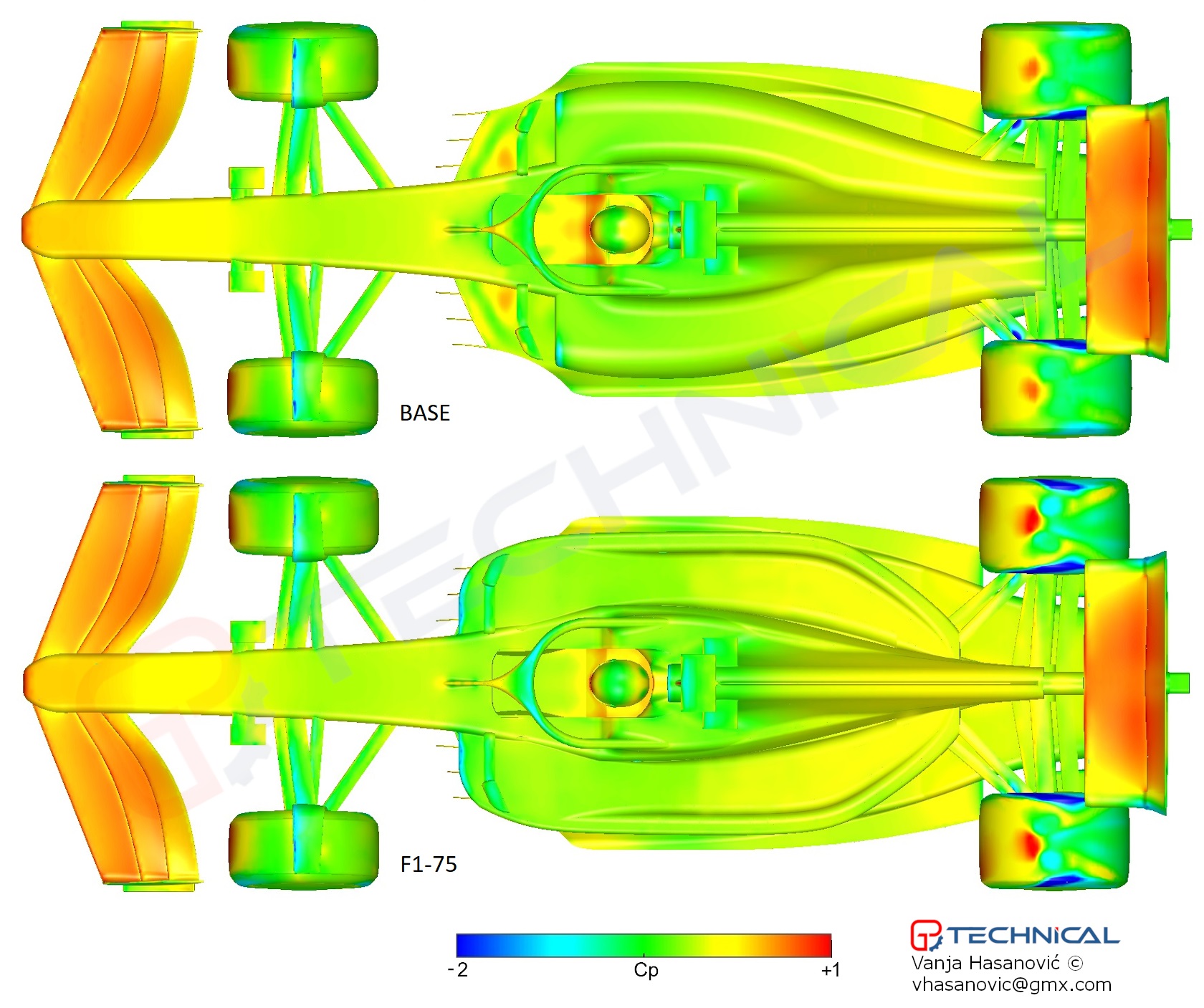 It's clear right away we have several areas of interest - intake, upper surface and rear surface.

The area under the tub-sidepods intake is a high pressure zone, working towards downforce on top of the floor and lift under the intake. No point in trying to figure out how much it helps and hurts overall, unless we had F1-75 geometry and Ferrari CFD setup.

The upper surface is fairly long, probably as long as it can be. On the front, we have some lift generated, as is the usual with the sidepods. In the rear, the tub, we have a higher pressure "pool" which is definitely helpful and one of the benefits Ferrari are looking towards, no doubt. Comparing the results, the overall effect on tub-sidepod comapred to base model is around 100% more lift (only on the sidepod). This is somewhat negated by downforce generated at the front of the floor, as mentioned. The difference is far bigger compared to "aston" sidepods, they are almost completely generating lift all over the top surface.

The rear surface of tub-sidepods works together with diffuser ramp upper surface to form an area of higher pressure. This adds rear downforce directly on the floor, but also increases the pressure on the rear of the tub-sidepod -reducing the drag. Compared to base model, tub-sidepod alone had 50% less drag. This looks a lot like the main reason Ferrari extended the sidepods all the way to the rear - to use this effect and reduce drag. So - F1-75 sidepods are not draggy!

As far as the gills go, they are very likely oriented so they follow the airflow, take a look at flow-viz of simulation. It took 3-4 iterrations to prevent the top leading edge from separating, must be the same for Ferrari and the reason why they raised the intake so much. 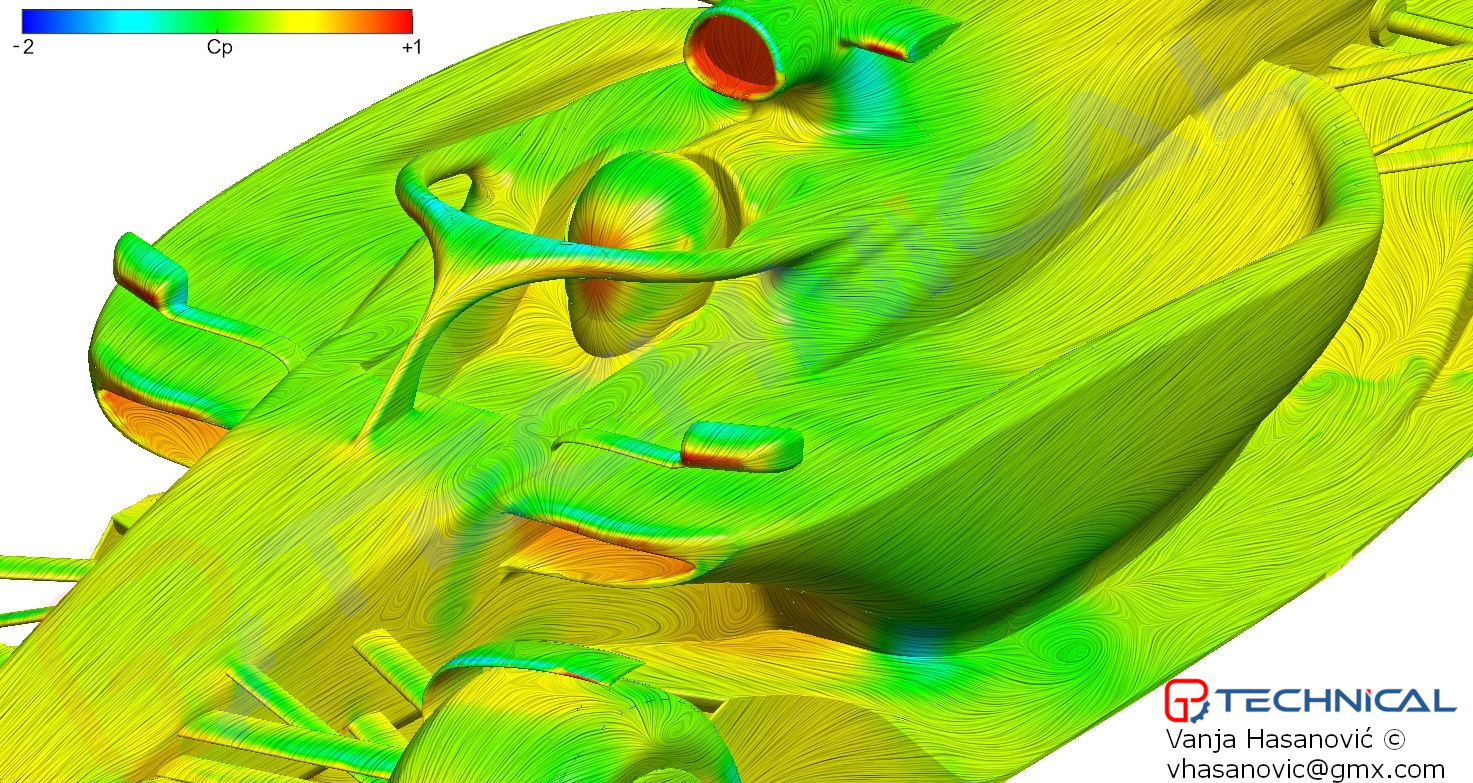 I'd like to point out again that the model is very rough and even the sidepod is very far from acutal F1-75. 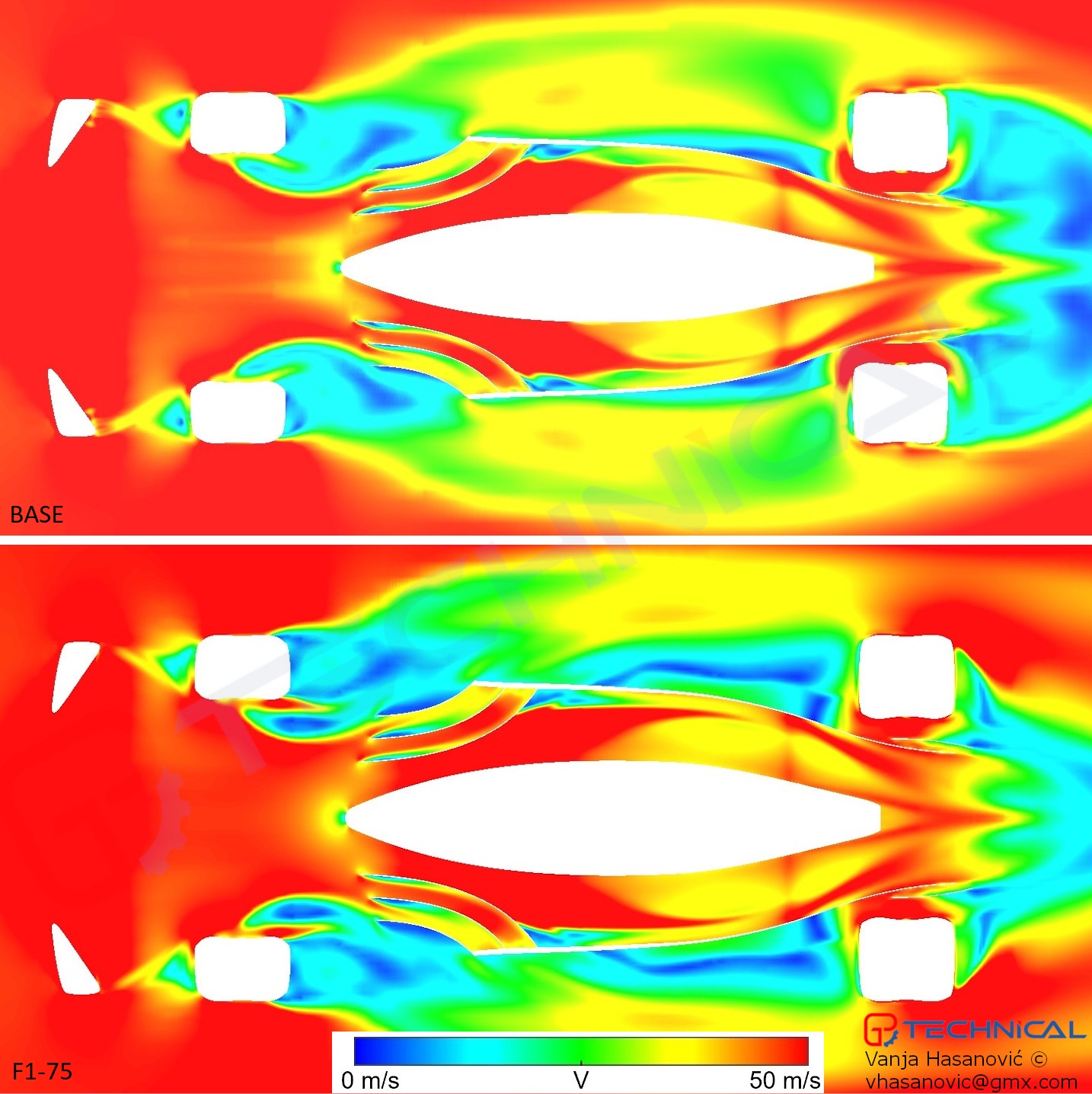 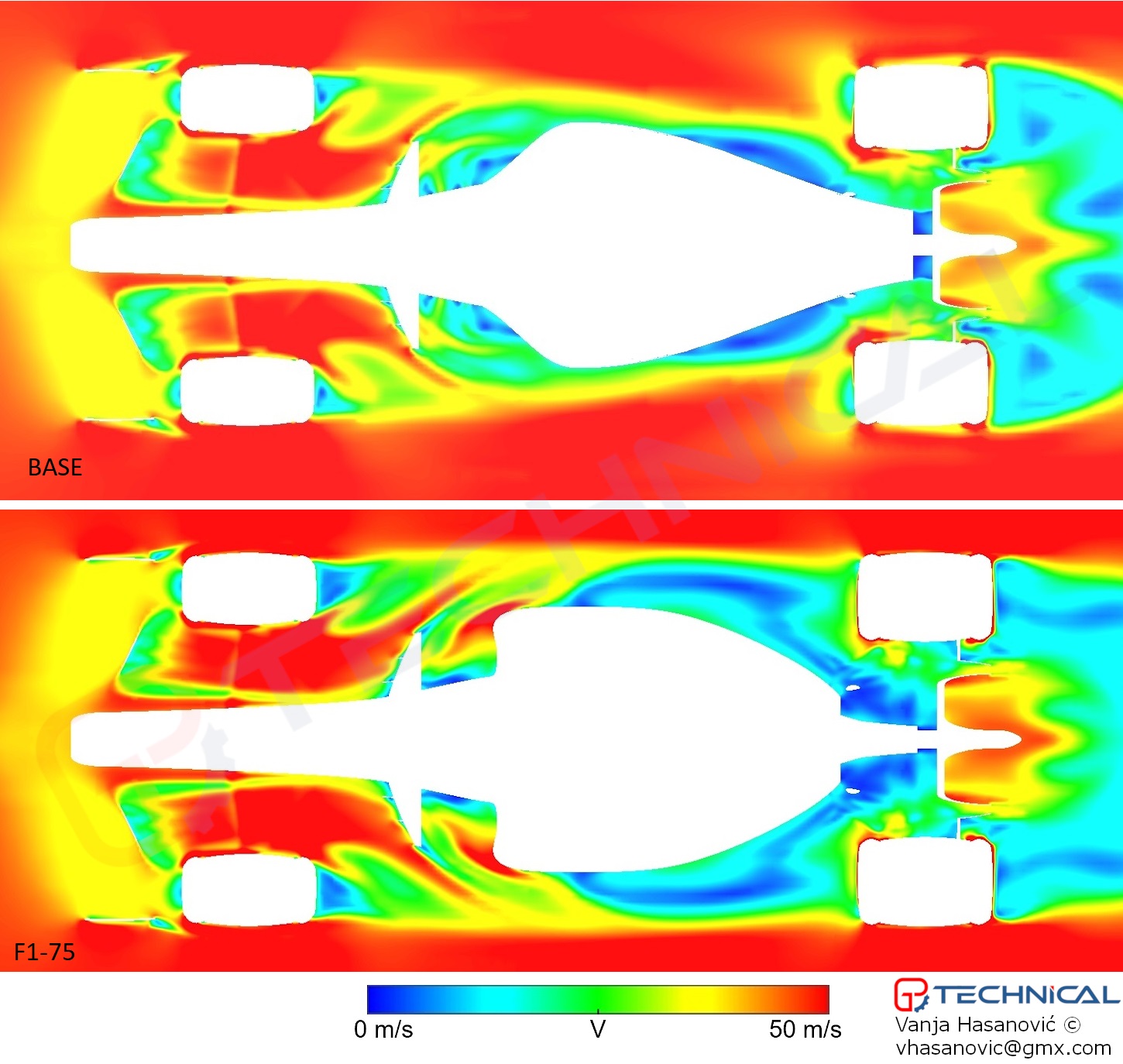 At 0.1m there is no clear benefit of front tyre wake outwash, as that's still at the floor height. At 0.3m the difference is clear, as well as the difference in airflow towards the rear tyre. At tub-sidepods model, the barge-board-like geometry created a wake going towards rear tyre, and the difference in pressure can also be seen at the first comparison picture. The low-energy wake hits the tyre and pressure-increase is a lot lower. Overall, and take this with a grain of salt, rear tyre drag decreased by more than 10% compared to base model.

In total, compared to base model the tub-sidepod model had around 1-2% more downforce which shouldn't be taken into account as this depends heavily on overall geometry and how all the parts are working together. What's really interesting is the drag benefit - tub-sidepod model had around 11% less drag than base model! According to jjn, the base model isn't too good to compare to in this matter, however I think this difference is significant and should be noted.

Since Ferrari had to extend the sidepods to use the ramp pressure increase to reduce drag, it looks like they made the tub to offset the lift this generates. This is very clear when compared to aston-like sidepods. Afterwards, Ferrari surely used all effects combined with cooling channel design and gills.
And they call it a stall. A STALL!

So it reduced drag and improved downforce? I'm impressed.
Top

Wow, thanks for all the efforts. I enjoyed reading it.
Top

That's a great read, thank you for your time!

Though, as far as I understood, those numbers are all compared against the base 2022 car model.
Would love to see it compared against one of the slimmer concepts (particularly interested in Mercedes'), as that would be a far more interesting comparison in my opinion.

Nevertheless, thanks for clearing some misconceptions! Eye aero gurus who were calling the Ferrari fat and draggy will probably be a little more silent now

Thank you for sharing this. I have upvoted. Your efforts are appreciated.

A question: this is modelling from air meeting head on. My little brain can't work out if there be a significant impact with yaw/sidewinds to the concept over a traditional sidepod shape? I do wonder if this direction Ferrari have gone down will be a pain to set up in reality.
Top

Thank you for your amazing effort, Vanja, jjn9128 and Vyssion. A really interesting analysis.

I was waiting for it as I’ve mentioned in a post in the SF F1-75 thread today - in order to have an idea of how the concept might work.
A few people were expressing their concerns about a draggy Ferrari or whether the concept might be wrong. As it turns out - compared to a base model at least - it gives both less drag and more downforce at the same time.
Top

It made a big difference on the high pressure side of the beam wing. If that flat sidepod is a duct it will work even better. Ferrari did a good job, man I'm excited, a 3-4 way fight for the championship?
Saishū kōnā
Top

Considering that Ferrari designed their whole car around this concept, including the engine and the suspension, it should be even more effective in real life. I'm starting to seriously think that they didn't went into the wrong direction.
Top

Thanks Vanja. Great work as always.

Was your drag measurement for the entire car?

How is the air going to the beam wing?

Thank you so much for your time.Much impressive.Good news for me.
-§- Each section is wholeness. Oo==§==oO My english suck,sorry-§-
Top

Holy smokes what a post. Thank you for this information. Sounds like Ferrari may have nailed it. 🏎

Great work! Thank you for your work! id the base model you used for your sims available for others to use as well?
Top

This is why I joined this forum several years ago… Thank you! Fantastic post!
Top
205 posts