SmallSoldier wrote: ↑
Thu Mar 24, 2022 4:56 pm
Williams coolers on the sides of the airbox ducts, relocating them here helped with the skinny sidepods: 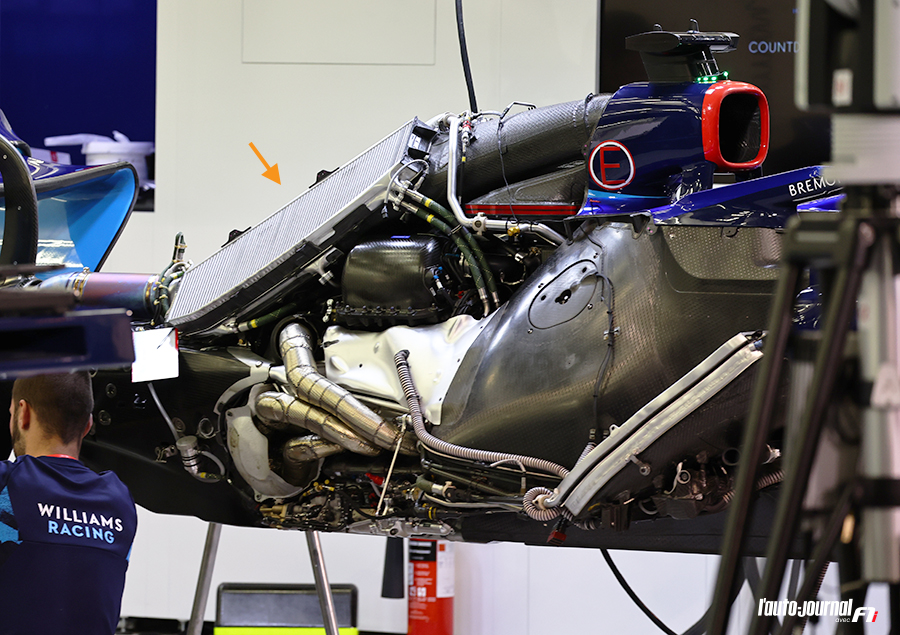 Alpine style inlets on Albon's car. But the rads look the same shape.

Haven't seen any images of the centerline cooling.
Motorsport Graduate in search of team experience ;)
Top 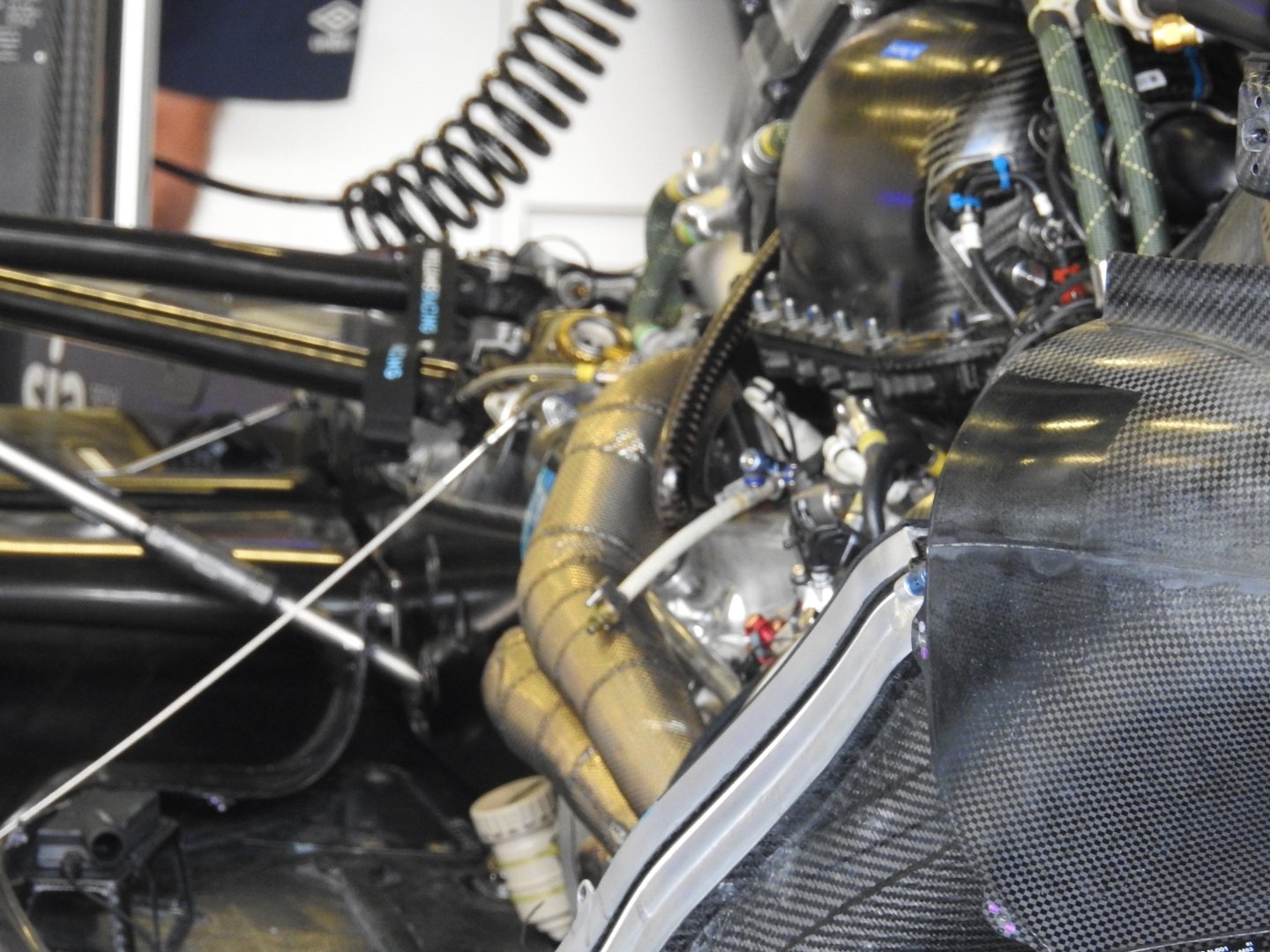 I believe that image. (The first 2 in Scarbs tweet) is the old spec on Lattifi's car.

Hopefully we get some more of Albon's spec.
Motorsport Graduate in search of team experience ;)
Top

Ferrari-style cooling intake if anything
Top

Ferrari-style cooling intake if anything

Ferrari intake with what looks like Mk. 1 RB sidepods. So it will look like the Ferrari from the front and the RB from the side? Interesting because Alpine seem to have done the opposite, first extending the intakes forward adding to the undercut and then adding the Ferrari-style concave surface.

I don’t see a huge undercut; maybe the car will end up looking like the Haas with its bulky sides and blunt front? Looking forward to more pics…
"You can't argue with stupid people, they will drag you down to their level and beat you with experience"
- Mark Twain
Top

Another perspective (via The Race): 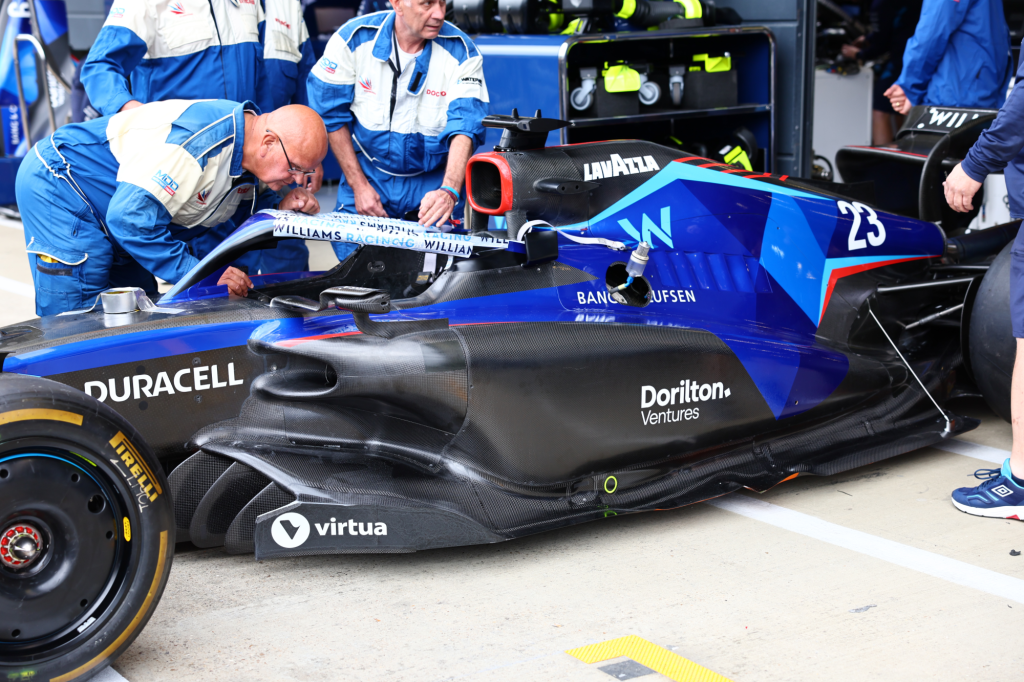 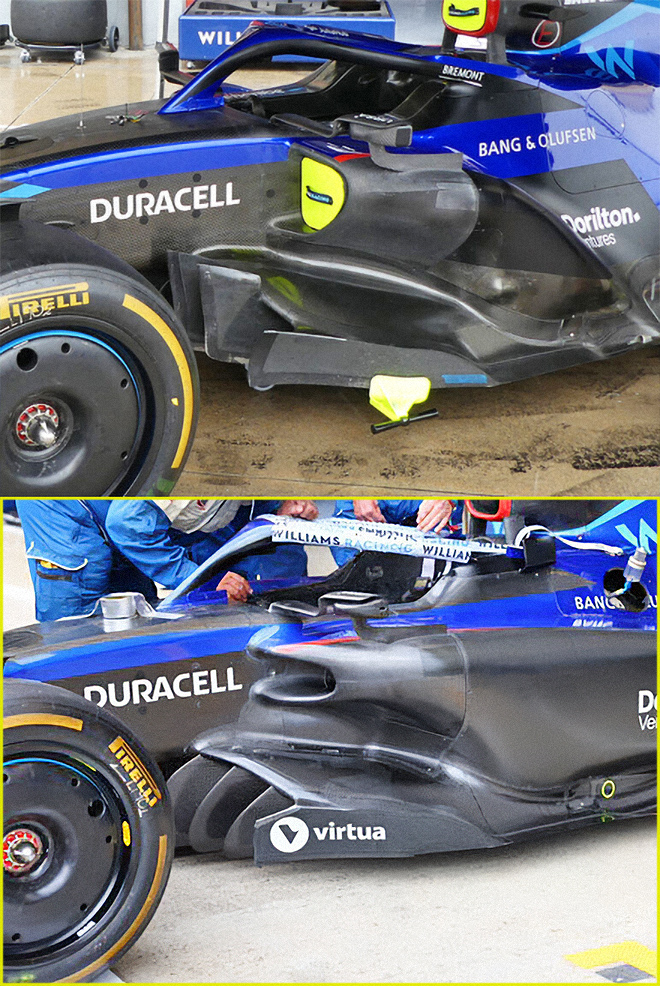 There's a hint to how the airflow has changed when you look at the angle of the floor stay fixing between both cars. 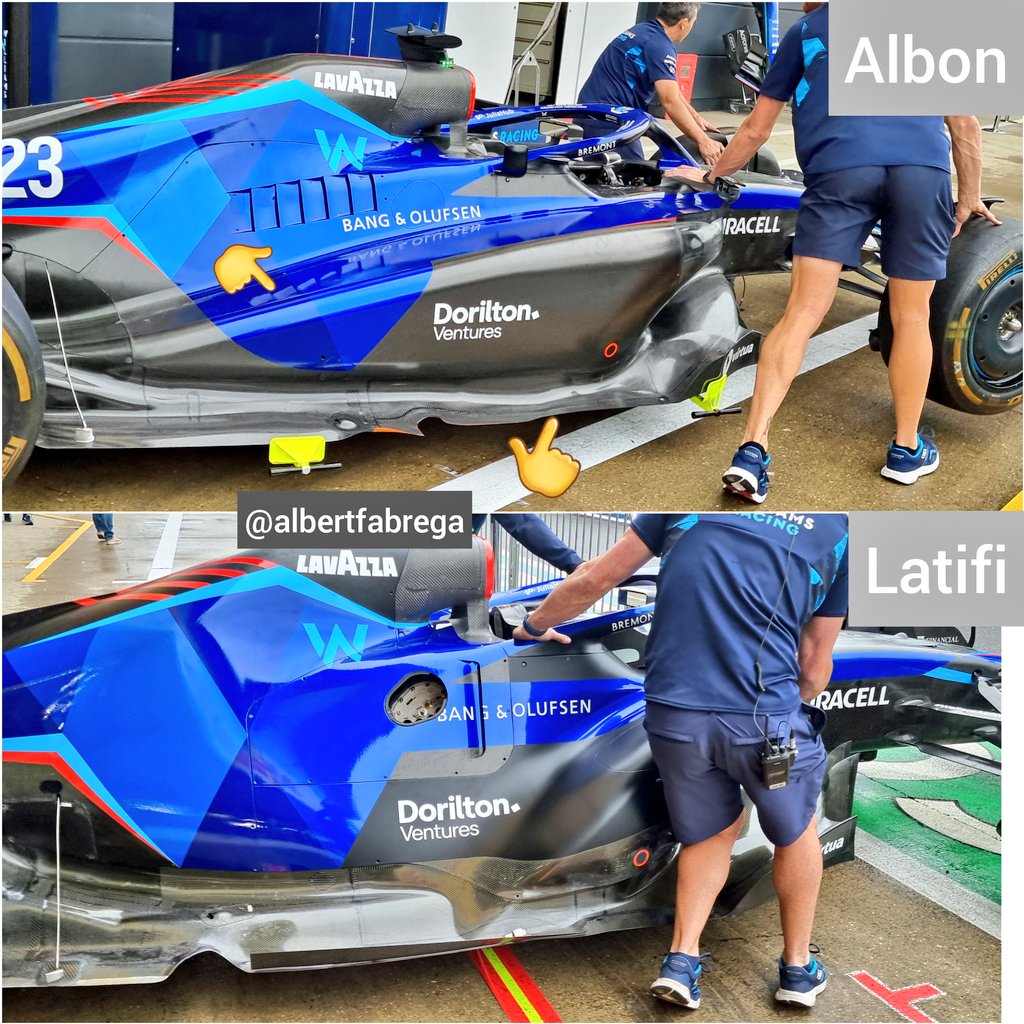 Surprising to see that the narrative was that this was "in the direction of Red Bull" because it seems to look like an amalgamation of the Ferrari and the original Alpine sidepods. Good to see wholesale changes though. IIRC this is the first time that Williams have had "conventional" sidepods since 2017(!). I'm surprised to see that the car doesn't have a "bargeboard" strake like many others have.
"You can't argue with stupid people, they will drag you down to their level and beat you with experience"
- Mark Twain
Top

Note also a new, streight (no spoon shape) rear wing. Waiting for the photos of the front wing with anticipation.
Top

Really looking forward to seeing how this changes things. Going from a mini-zero pod design to much more normal ones a bit like the early red bull side pods.

Imagine if this puts them in the midfield. The factory will be on overtime to get a second set down before quali. (unlikely though)
No Mikey Noo! No! Nooo Mikey! That was sooo not riiight!!
Top

Note the new winglets where the halo ends.
Top

The cutouts on the side are different (and further back), as are the front shape (at the least) of the vanes under it. Seems like a simple version between what Ferrari/Alpine had at front, and Alpine/Alpha Romeo at the back, apart from the earlier kickup for the diffuser.
Top

Yes, if they were following the Ferrari (and why not, it's fast) I don't understand why Williams have not gone more aggressively in the direction of Ferrari sidepods with the larger area of flatter sides (that continue more towards the rear axle) and the top scalloping?

They have a new floor but the floor strakes seem to be more towards the Ferrari style than the Red Bull style (small outer strakes, no double bargeboard) so why not go all-in on the Ferrari approach?

I see that not only did Alpine extend the flat vertical outer part of the sidepod more to the rear axle at the second or third race, now they have also scalloped the top more like Ferrari too: https://pbs.twimg.com/media/FWgW-5xVsAE ... =4096x4096 Which tends to suggest the Ferrari design is probably "better", so why didn't Williams just jump directly to the Ferrari-style design instead of going towards the early Alpine downwash design that (presumably) isn't as good? Williams needed to make all-new moulds anyway, so why do it incrementally, I don't understand? (I just want the best for Williams and for Williams to be as fast as possible!)

Still it looks nice, but it doesn't seem like a terribly aggressive design, it seems more mild like the McLaren or something, despite Williams having the opportunity to copy from the best by now (just my armchair opinion!).

Anyway, bravo to Williams for producing such a comprehensive new package with different coolers and so many different bodywork parts!

I thought they would just extend the rear part of the sidepods and leave everything else the same to be honest, to redo the centreline cooler and redo the radiator inlets must have significantly increased cost?

I wonder why Williams decided on those larger radiator intakes in the first place, if they are now able to slim the intakes down significantly?