A place to discuss the characteristics of the cars in Formula One, both current as well as historical. Laptimes, driver worshipping and team chatter does not belong here.
1814 posts

Not if there was some kind of fluidic switch; but I don’t see why you’d want that here - why wouldn’t it just always be open?
Top

PlatinumZealot wrote: ↑
Sat Feb 24, 2018 11:53 pm
What do you say to this: The actual radiator inlet is not the visible part that we see. Those are merely guides in front of it. The lower main guide hole goes straight rearward and down, and the top hole goes down inside and splays outboard (or vice-versa). Dare I say the actual real radiator inlet is the same size as any other F1 cars - it's just hidden like last year's SF-70H.

This is basically my view as well. We are talking about semantics right now, should we call it front and top inlet, or is it just one single inlet with flow conditioners in it (the flaps on top of frontal inlet). In reality, it's not the same situation as last year, when we'd be more right than wrong to say - it's two inlets - because of the difference in lateral dimensions. Now, it's probably more accurate to say it's a single inlet (about the same size as any other, as you say) sitting at an angle and with flaps as flow conditioners to guide the air down the intake where it's needed.

What I was referring to in the post you quote is this: 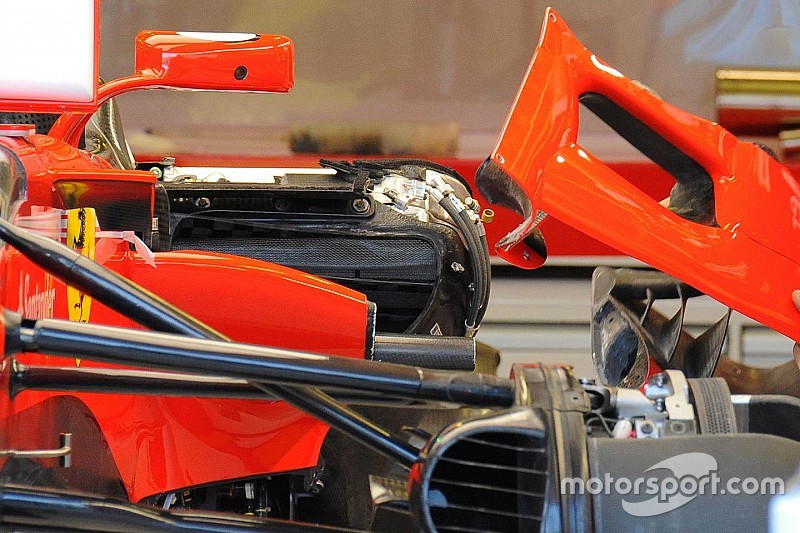 SF70-H had a wide tub, with integrated bottom side pod inlet lip. Now, this piece of bodywork is a separate part (bodywork separation lines tell us this), screwed on the tub. Side impact structure is still there in the middle, but bodywork is a separate piece around it. This saves the cost for tooling manufacture and material for the tub, as well as giving the team an option to swap different designs. My guess is that it's not an easy thing to achieve (structurally most likely), since it took the team a year to make it so.

I am enjoying this discussion very much. Please allow me the time to make some appropriate drawings worthy of this forum, to help me illustrate my thoughts.

JasonF1 wrote: ↑
Sun Feb 25, 2018 4:01 am
What Just_a_fan said regarding the slot is correct, the slots themselves doesn't make the vortex stronger, they actually weaken it. A Mclaren engineer was talking about it last season and that's what he implied.

This subject will also be covered in my reply to just_a_fan. Is there perhaps a video, or an article with a quote from this engineer on the subject?
And they call it a stall. A STALL!

Is this your illustration? In my opinion, it shows correctly the inside of the mirror, just not the overall flow structure. Here's why. Take a look at my (very humble) illustration of airflow around SF70-H side pod inlet and a bit inside the intake as well. It was made a year ago. In front of every opening on bodywork, every slot or similar, there will be a high pressure zone. The air will want to go around this zone, either up, down or sideways. You can see this on any flow viz photo of side pod inlet, like this (I even made an accidental prophecy on MCL33 inlet shape, yay me): Along with that, every non-symmetrical airfoil causes a disturbance in airflow direction before and after it passes the airfoil/wing.

This is a very nice explanation on the subject of airfoil lift. "The amount of lift generated by an object depends on how much the flow is turned, which depends on the shape of the object." The bigger the curve - camber - of airfoil (flaps and slats are considered as theoretical parts of airfoil), the bigger the lift and consequently - the bigger the angle of airflow bend before and after the airfoil. These are some very cambered airfoils in SF70 and 71 radiator inlets.

Now, when you put all these things together, you can see how I saw the airflow around SF70-H. I don't think anything has dramatically changed there, mirrors were put very high to prevent flow obstruction at first. They were brought down a bit once team was confident they wouldn't interfere significantly. Now they are in same position as last year, with some slots.

In my view, these slots couldn't possibly turn the airflow around as much as illustrated on the picture you posted. Firstly, you'd need a big piece of bodywork to make a bend in airflow that big. Secondly, as mentioned before, in front of every opening there's a high pressure zone. This would make it an adverse pressure gradient for oncoming airflow and it would want to go around it, not towards it. It would be an entirely different story if there was a very low pressure zone inside the radiator intake.

No weird hole in the floor behind the bargeboards, just the 'normal teeth'

They are just to direct airflow into the upper side pod air intake, if you look from above its perfectly aligned.
Top

With regards to the "holes" in the floor below the sidepods, look at the video for the car during Sebs interview in the beginning of this video:

Mirrors are located way too back for them to be feeding the upper sidepod slot. They are sloted purely for drag reduction.
Top

The forward looks open like in the early season SF70-H, there's barely a connection.
And the ones in front of the rear tires look like fully enclosed holes...

I wonder if Ferrari is playing games or have their manufacturing precision reached new heights.
Top

Are my eyes tricking me or something funny going on here: Like a second element of floor coming down?
Top

this year ferrari is even more revolutionary on cooling
while the concept remains the same ( take clear air from above, and impact as less as possible both frontal section and the underwork of the sidepods ) the increase in size of the upper slot reveals that the efficiency improvement is exactly in taking this flux even directing it with mirror underside ( not the slots they are for wake reduction by lowering pressure as redbull nose ) but mostly with the lower pressure of the intake cavity, doing at the same time structural function ( the crash integrated like last year ) cooling ( the two mouths ) and sidepod detachment prevention ( the deviation impressed from the upper mouth keeps the flux attached and fuels the diffuser even from above , at least better than normal solutions that have to use a lot of elements there to prevent further detachment )

i dont think it can be compared with other radiator sizes, cause it walks parallel to the flow and not normal, so of course the section is not the same (but the frontal part is very very little ) but that s exactly the feature, it cant be compared cause it uses a whole different concept.

lateral deviators remain not mercedes style and littler ( to compromise with resistance, compromises that mercedes can afford to play differently )
the only other interesting solution seen so far is the extreme rastremation of mercedes sidepods ( like they litteraly have no radiators, but it s also matter of covering or not rear suspensions )
Last edited by mmred on Sun Feb 25, 2018 6:45 pm, edited 1 time in total.
Top

It does show the very high rake angle.
Top

In 2017 rules declared illegal that part of the floor, or i remember wrong?
Top
1814 posts