Here are our CFD links and discussions about aerodynamics, suspension, driver safety and tyres. Please stick to F1 on this forum.
372 posts

So far drivers have commented, that the new front wing is much more stable. So it looks like one of the objectives could be reached.

I must say that the clean look of the cars is very appealing. We will get used to the new proportion of wings and I'm quite eager to see what the first technical cooperation of F1 top teams (OWG) has achieved.

so ugly,especially his rear wing,which makes me reminding of 90s!
Yes,we can
Top

Metar wrote:I have a purely hypothetical question: Would it be legal to move the air-intake of the engine to the location of Ferrari's Frankenradiator?

I don't believe so but it wouldn't be advantageous. The air flow in that region doesn't have good characteristics (Reynolds number and pressure) compared to the air intake above the driver. Also, the fluid dynamics of the air intake would have to divert the flow from that position on the right around to the top of the engine, inducing more losses.

Either way, the rollover structure has to remain where it is so the air intake wouldn't reduce this height, by removing it.


So, hypothetically yes I believe they could do it, but it wouldn't be a good idea.

I think, the fact that the rollover structure and engine intake are allowed to be integrated (wasn't always the case) actually allows for pretty much a best case scenario. It allows the airflow aft and above the driver's head to be fair. I don't think height there is an issue, but i think that mostly depends on the relative speed of air going into the airbox I think.
I see manchild's idea to be very draggy. It isn't used anymore in lemans prototypes and the like anymore. Even if you do a nice job, that funny curvy loop, just has too much surface area. See the latest Audi and Acura LMPs for instance 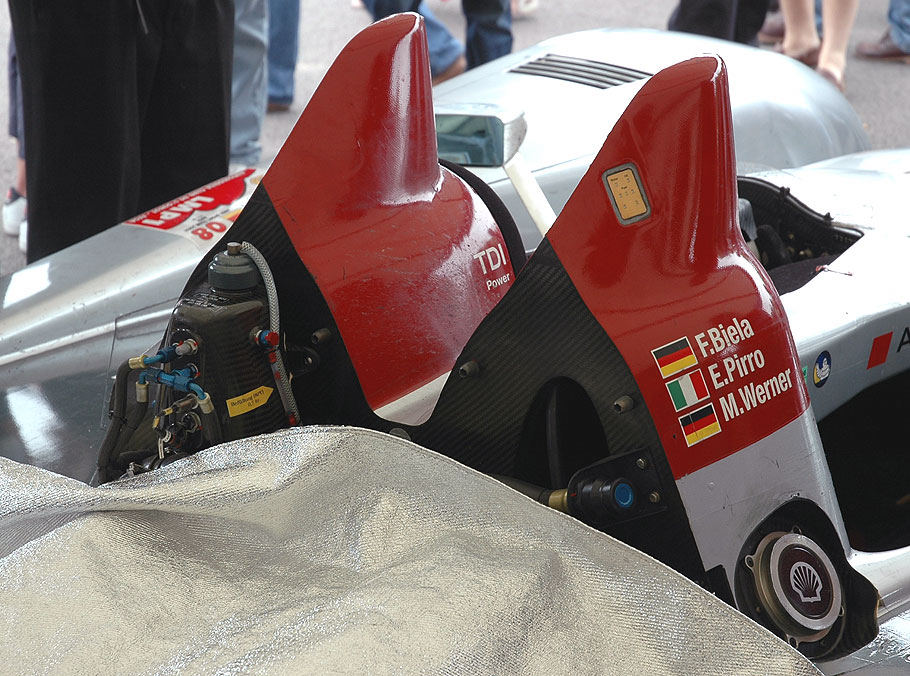 Wow! This has turned into a very informative thread! I've been so busy working on this project that I haven't had the time to come back and check on it for quite a while. I was unable to bring up any of Smirkoff's images that he shared ( http://img233.imageshack.us/my.php?imag ... ualxh4.jpg ) - can someone share them here by another means? I'd like to check it out and compare it to what we've put together thus far. Thanks guys, F1Technical really is a great forum!
Top

I've just studied the McLaren main front wing flaps against the Ferrari after reading the article posted on this site. They both fold back and down at the inner edge nearest to the neutral part of the wing. Is this not going to cause airflow to be slower over the top part of the neutral section?
"badically pressuring rosnerg " Ringo 05/10/2014
Top

A poor MS paint mock up - but the idea should be there, a low fat wing profiled nose - would there be any advantage in running such a nose at any kind of angle?

three views to sort of show what I mean.
Top

Unfortunately the cockpit/nose width must decrease as shown in this drawing (red area is the minimum dimension).

How is the heat that was once dealed with by using chimneys and gills taken care of now that those bodywork openings are banned? I recall reading about changes in the design of the cooling system, but nothing indepth. Does anyone have any info on that? Exactly what were those changes?
Forum guide: read before posting

mx_tifosi wrote:How is the heat that was once dealed with by using chimneys and gills taken care of now that those bodywork openings are banned? I recall reading about changes in the design of the cooling system, but nothing indepth. Does anyone have any info on that? Exactly what were those changes?

They will go back to the old style of exhausting the cooling air out of the back of the car... check these picks.

Alright, thanks. On the Toyota, is it the vent under the exhaust outlet?
Forum guide: read before posting

not fully understanding the wording of your question... both the toyo & the F60 have oversized holes for the engine exhaust pipes to also allow for "cooling" air to also escape but then they also have a main exhaust for cooling air out the back of the car behind the rear axle. There was an excellant pic of that for the F60 but I cant find it at the moment, I am still waiting to see the rear shot of the MP4/24.

With all of the sidepod inlets dumping directly out the back of the car instead of out chimneys/gills, will that allow for more of a center downwash at the rear of the car? Or at least more so than 2008?
Top
372 posts