All that has to do with the power train, gearbox, clutch, fuels and lubricants, etc. Generally the mechanical side of Formula One.
3742 posts

Was this the post with numbers you said was coming?
Top

You write:
“This is probably a dumb question, but if they are unloaded why do you need them?”

Nothing can run completely “unloaded”.
However when the load is adequately small / weak, then the wear becomes too slow to affect the overall reliability or TBO (Time Between Overhauls) of the engine. Other parts wear faster.

By the way:
The synchronizing gearwheels in the photos are not hardened.
If during the tests they show signs of wear, then they will undergo “nitride surface hardening”.

Ok, so as I thought they will be loaded. I was trying to point this out in the question, gears only do anything if they are loaded. If there's no load get rid of them, if they are needed you need to recognise their loads and design accordingly.
Top

Gear wear manolis, you state if they wear.
You should know this before you build your second engine. Not, still not sure on the eleventh unit. How much more about this engine do you really not know?
Am I missing something? Im glad Im not paying the bills.
As a prototype builder myself I understand financial efficiency, you wouldn't catch me building eleven of my first engine design without a full ground and flight test regime.
As it is Im on my third engine iteration before I left the ground and thats in a 'safe' autogyro.
Luckily for you, I don't belive that engine of yours will get you off the ground, a blessing in disguise.
Top

If indeed you have a scuffing issue hardening the gears won't help. The heat generated by steel sliding on steel is enough to anneal the material when there is no lubricant to carry heat away.

Using one or two non-metallic gears as suggested by another user would be a much better solution, but still not as good as lubricating them.

I'm equally baffled as to why you've built so many of them before doing considerable testing?
nah pop no style
Top

Overheating(?) of the synchronizing gearwheels.

You write:
"Ok, so as I thought they will be loaded. I was trying to point this out in the question, gears only do anything if they are loaded. If there's no load get rid of them, if they are needed you need to recognise their loads and design accordingly."

Instead of your ON-OFF approach (“the gearwheels are either loaded, or absolutely / perfectly unloaded”), a better engineering approach is to use the class of magnitude for the loading.
With the actual load on the teeth of a gearwheel being, say, 1,000 times (3 orders of magnitude) lower than its normal "capacity", its teeth run unloaded and need not lubricant.

You write:
If indeed you have a scuffing issue hardening the gears won't help. The heat generated by steel sliding on steel is enough to anneal the material when there is no lubricant to carry heat away.

Got any actual test data or is this more word salad ®? Exactly how long have you run your engine(s)? One hour, two hours, 5 minutes? Any ideas about mean time between overhaul/failure? Have you actually run an engine with propellers to check heat rejection? Inquiring minds want to know.
Top

Manolis, in his own words, refers to the discussions on these forums as

manolis wrote: ↑
Fri Oct 09, 2020 4:42 am
The discussion in the forums is to see how the others think about it, and if someone – around the world - can “see” some flaw.
So far the project survived.


So, here is a periodic reminder that in over 150 pages of discussion on this forum, and the additional thousands of words of challenges on the gofly aviation competition forum, manolis summarizes the interactions as above and has taken on one (1) suggestion - Rodak suggested that the controllability of a flying vertical post with an engine on top had not been demonstrated and that said post was not ergonomic - so get this - manolis added a bend to the vertical post.
Top 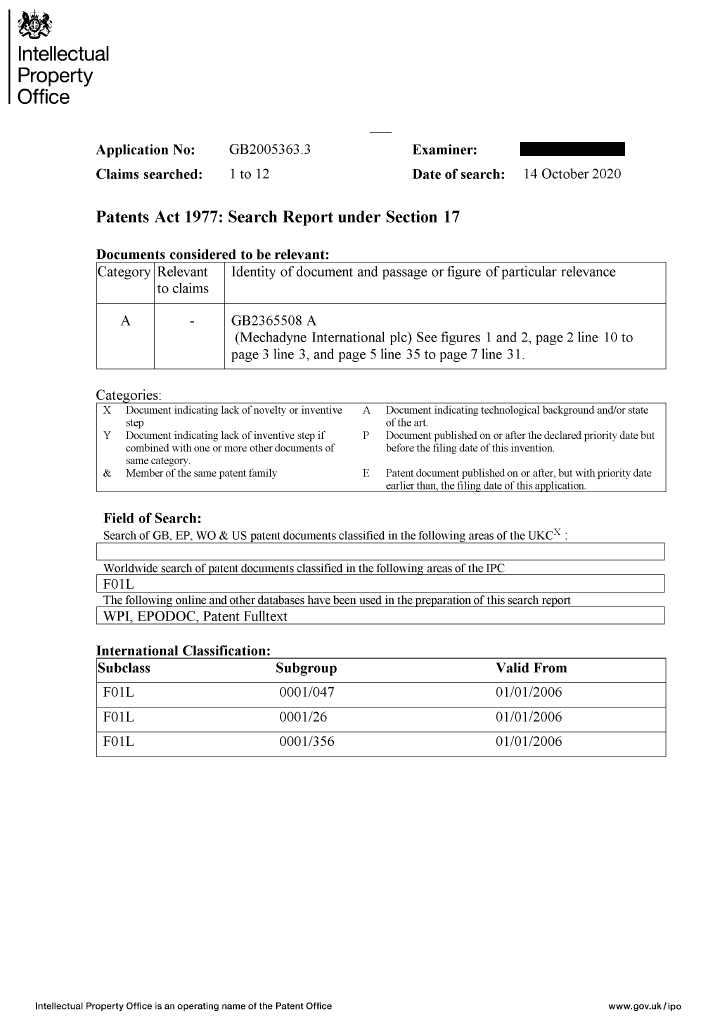 is the Search Report (prepared by the UK Patent Office; received today) for the PatVVD patent application: 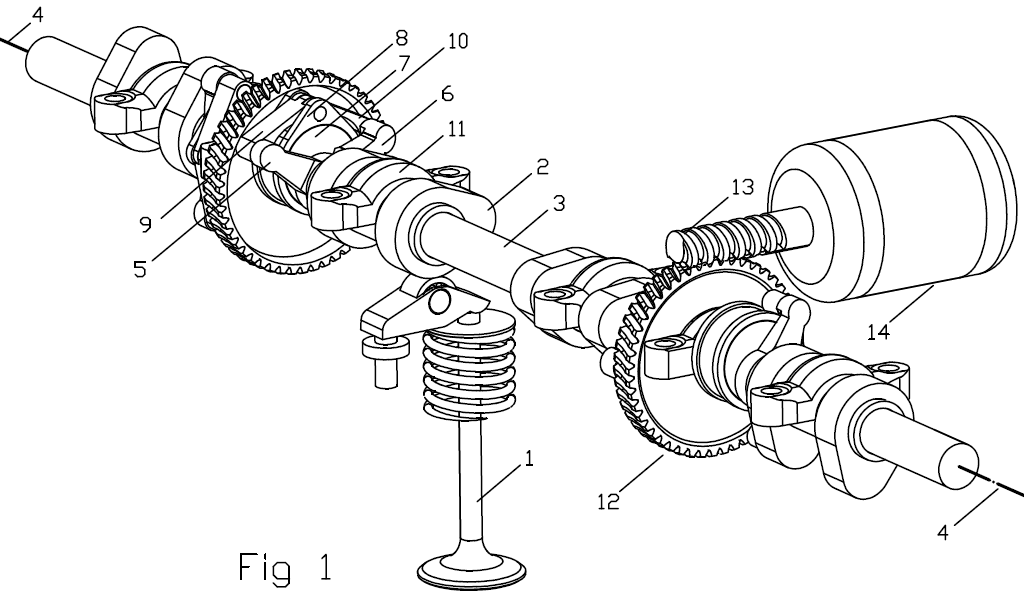 The Search Report has only one document; it is the GB2365508A patent application filed by Mechadyne; and this document belongs in the A category (i.e. it is a “document indicating technical background and/or state of the art”).

So, according the Patent Examiner of the UK-IPO, the PatVVD invention is new and is not anticipated by any known prior art.


Here https://www.pattakon.com/VVD/GB2365508A.pdf is the original document of the patent application of Mechadyne; at its last pages (21 to 24) you can see the Search Reports for Mechadyne’s invention.

Several contributors are becoming more and more antagonistic - to what end I am unsure.

In technical matters there is often a right and a wrong and it is more than reasonable to argue the case you believe to be correct. On the other hand, there are often grey areas and differences of opinion where, although it is still correct to put your case, it is not reasonable to demand proof from your opponent - especially when you have provided none yourself.

I believe that the most clever person on this earth can learn something from the least clever. Before you start down the path of chasing Manolis off this forum, first consider his accomplishments and the breadth of his ingenuity. He may have seen little success in getting his inventions to market, but I believe he is the most creative inventor in our field today and deserves our robust technical criticism to be tempered with respect.
je suis charlie
Top

That's all good and well, but if manolis won't respond to reasonable questions and requests for information and simply reposts pictures and drawings, then what? Persons who read 'F1 Technical' ask technical questions and suggest technical solutions and are just brushed aside as if they were dunces. There have been attempts to actually volunteer effort to help manolis' design process and all of these attempts have been ignored; the natives are restless. Simple requests for data such as weight, c.g., power, etc. have simply been blown off without even an acknowledgement. Manolis actually sort of asked for help with some design stuff and when he was requested to provide some design criteria never responded except to re-post his 'dancing' pictures.

This goes both ways and manolis ignores this. The 'flying' machine he suggests is a death machine and he is not willing to take any sort of input to make it safer or possible. A basic question was asked: how is the 'pilot' attached to the motor unit? Manolis suggested we make our own choice, glue, ropes, or, not mentioned, but possibly bone implants to the shoulder blades. We are all ignorant fools who do not understand the 'pendulum rocket fallacy' or whatever. So, no, the shoe is on the other foot. Respect diminishes with each non-answer and repeat post with pictures. There have been interesting responses from persons like Uniflow, who has actually built and flown original engines, but his input is simply ignored; how respectful is that?
Last edited by Rodak on Tue Oct 20, 2020 5:51 pm, edited 1 time in total.
Top

Gg, I used to think like you, particularly about MPs engine work. But to be honest his behavior in response to reasonable questions from experienced persons about the personal flyer have already made me reevaluate my opinion of his engines and other constructions. That's probably not good, and I'm probably not the only one doing it, but it is worth pondering. Gg perhaps your engine experience is mirrored by other posters flight and aviation engineering experience so you can try to imagine what this thread is like for us, and that your assessments of the relative importance and precision of different aspects of the flyer - "what is grey area vs black and white" - are slightly different to ours.
Top

Thanks Rodak and nzjrs - you both make some good points. OTOH Manolis' arrogance or failure to respond to questions should not result in open warfare. As you know I have significant disagreement with Manolis on issues including stability, handlebars, instant centres and reacting the toppling moment of the flyer power unit. I am satisfied that he will follow a process that allows him to identify these issues during tethered testing, so I am happy to stop butting my head against that particular wall and observe.

Exactly this. One tiny change, a UJ pivot above the pilot's head and handlebars is all that is needed. So very simple and so strongly rejected time after time. That's what's so frustrating.

I love that the handlebars also form the landing tripod on this. It looks like it has also has a yaw control tail rotor too despite contra rotating props.
Top

Here is a simple approach of the Portable Flyer. 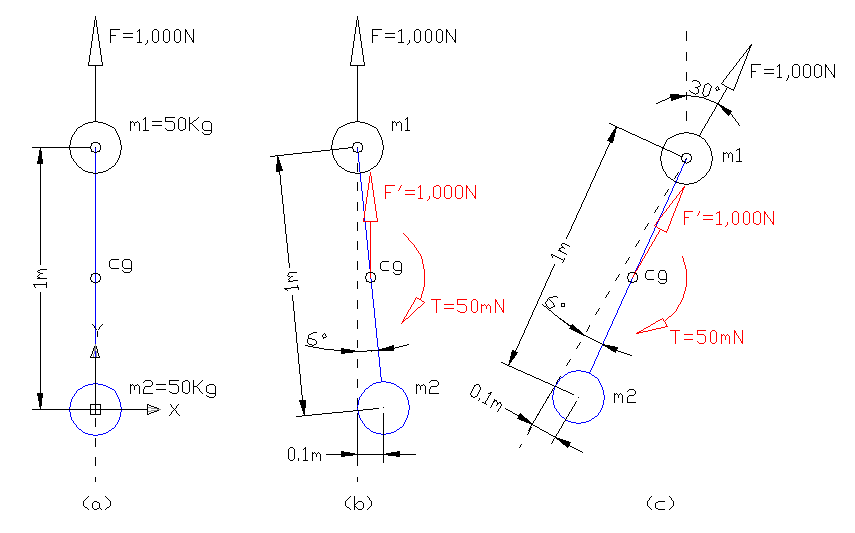 It comprises a mass m1 (50Kg) and a mass m2 (also 50Kg for simplicity) 1m away from each other. The overall center of gravity is at cg.

The m2 can turn about the center of m1 at all directions, remaining at constant distance (1m) from the m1. The m2 comprises the rest body of the pilot and the fuel tank.


At (a) the Portable Flyer is hovering. The thrust axis (force F from the propellers) passes through the overall center of gravity cg.

The time for this wide transition is significant in order to detect if the pilot can really control his flight by varying his body posture (without any aerodynamic control).

The above times show that the "Weight Displacement Control", alone, is more than adequate, but not for the "yaw" (rotation about pilot's long axis).

Only for the "yaw" the "aerodynamic control" is necessary. However it can strengthen the "Weight Displacement Control".

isn't this what would have killed Mr Mayman ? (as I said a year or so ago)
(had he not chosen to fly over shallow water with rescue divers 50m behind)

upwards force falls away fast and there's a great lateral acceleration swamping the attempted weightshift control
or do we rely on having enough slipstream/airspeed for aerodynamic control to succeed ? (depending on attire ?)

ok (I guess and contrary to my fears) aerodynamic reaction to rotor tilt rate will give some pitch damping ?
Last edited by Tommy Cookers on Wed Oct 21, 2020 7:02 pm, edited 1 time in total.
Top
3742 posts