A place to discuss the characteristics of the cars in Formula One, both current as well as historical. Laptimes, driver worshipping and team chatter does not belong here.
248 posts

According to Reuters, the new car will be launched at the second test in Jerez .. so that's 10th Feb.


Force India have yet to name their 2011 driver line-up and gave no details about their plans.

However, experienced German Adrian Sutil is widely expected to be retained and Briton Paul di Resta tipped to graduate from the reserve role to a full race seat.

Italian Vitantonio Liuzzi remains under contract, however, and is also expecting to race.

German Nico Hulkenberg, replaced at Williams by well-funded Venezuelan rookie Pastor Maldonado despite taking pole position in Brazil last year, is also in the frame to join as reserve driver.

"Force India is our best shot, but it is also no secret that quite a few drivers are trying to land a seat there. We are talking to them and let's wait and see what develops," Hulkenberg told the official formula1.com website last month.

Damn it ... I was literally just about to create my first ever car thread with exactly this information ... I guess I spent too much time searching the forum to see if I was going to duplicate a thread!!!
"Change is inevitable, except from a vending machine ..."
Top

I had a search around too, couldn't believe no one had created it already.
Top

FI have been remarkably quiet over the off season : I guess the drama followed Mike Gascoyne to Team Lotus

As I understand it, they're taking the 2010 car because they can't get the 2011 car finished in time. There's no clever plan just balls to wall scrambling to get a car out. Not that that is significantly any different to the rest of the teams, other than that most of them will make the first test...
Top

A lot of teams missed the first test sessions in 2010.

Looking at last years thread, the only teams at the first test were:

That thread was too big, we should have one per session this time.
Top

by the way they are going to announce the driver line up on 26th jan, today, with sutil and di resta as the most likely shots
Top

Isn't it supposed to be Mercedes. When do they changed their engine supplier?

by the way they are going to announce the driver line up on 26th jan, today, with sutil and di resta as the most likely shots

Considering Di Resta is in the billing for a seat, I'd say no. Di Resta is a Mercedes man

EDIT: Apologies!! I thought you were insinuating that they would switch to Ferrari power. I didn't pick out the thread title mistake

The Force India will launch its new challenger online in 2011, with the VJM04 due to be revealed at 2pm (GMT) on Tuesday February 8. The Silverstone-based team has made the same choice as challenger Team Lotus, with both team’s deciding a launch over the internet was the best route to take this year.

In addition to the shows of its new car, two changes have been made to the driver line-up at Force India this year. Paul di Resta will join Adrian Sutil on the grid when making his debut at the season-opener in Bahrain, while ex-Williams man Nico Hülkenberg takes on Friday practice duties at the team.Adrian and di Resta will get their hands on the new VJM04 at the upcoming Jerez test. 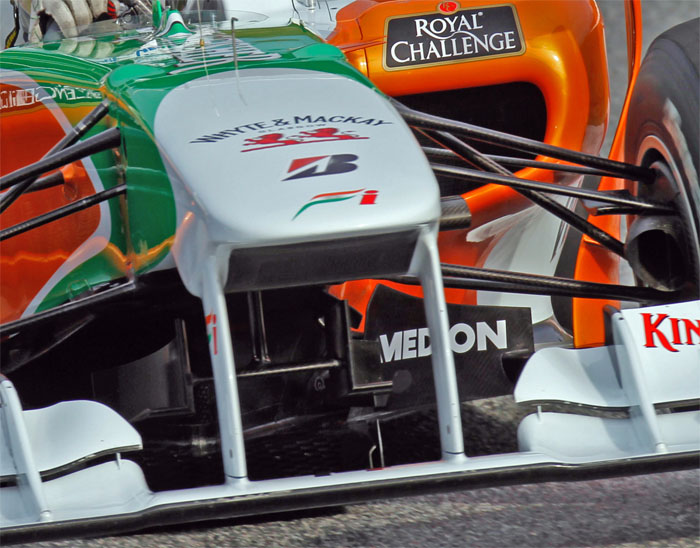 Force India is the last team, excluding HRT,to launch their 2011 contender.I'm keeping my fingers crossed,Will it be a radical design or will be conservative one like virgin.
Top

the virgin is soooo boring after all the crazy stuff we've seen from williams, and renault and mclaren this year. It doesn't have any interesting shapes.
btw, i've lost track, which team used to be Minardi at this point?
the four immutable forces:
static balance
dynamic balance
static imbalance
dynamic imbalance
Top

I am not getting my hopes up, after reading this comment from ScarbsF1:

The complex roll structure...... does he mean something like the Lotus and the W01 had last year?
Top

perer wrote:I am not getting my hopes up, after reading this comment from ScarbsF1:

The complex roll structure...... does he mean something like the Lotus and the W01 had last year?

Where is this pic of this complex roll structure?
Top
248 posts