Just_a_fan wrote: ↑
Tue Feb 26, 2019 10:04 am
It amazes me that they go to the effort of building a front wing, body work etc just for one 4-day test knowing that they have this package sat in the factory. None of that was done over the weekend in response to the "doom and gloom" of the first test, that's for sure.

Unless they have differing concepts for different types of races.
Top

Halo fairing is back
Top

The car we saw last week was just mule i agree.

Abandoned the nonsensical(imo) endplate they had last week, the new one not only curves in the right direction, it also has the cutoff that Renault and Williams have.

Amazing job with the sidepods, should be a big performance change all things considered.
Top 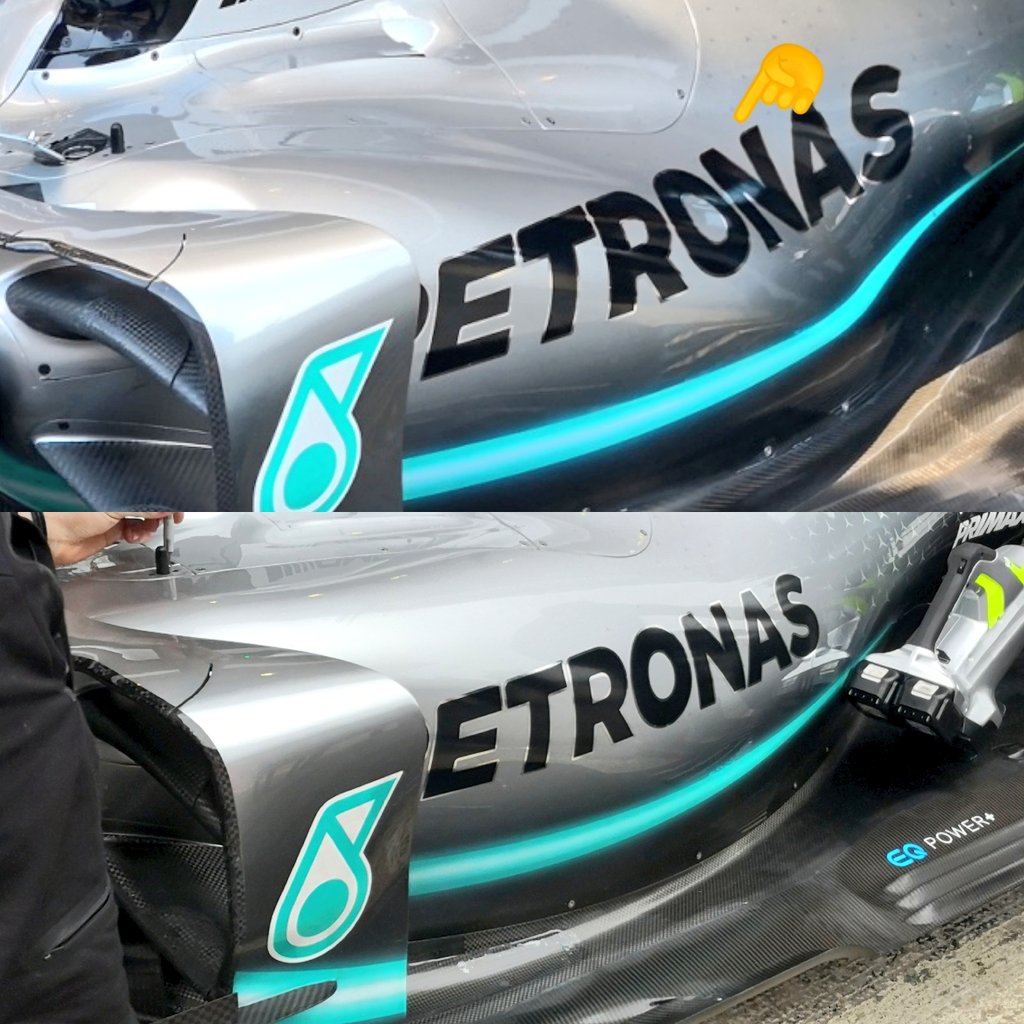 Via @AlbertFabrega
Last edited by Morteza on Tue Feb 26, 2019 10:20 am, edited 1 time in total.
"A fool thinks himself to be wise, but a wise man knows himself to be a fool."~William Shakespeare
Top

Unless they have differing concepts for different types of races.

That is crazy, they are even adding new bits since this morning (the 'ears').

I do not know enough about all the parts. But does any of it hint an an issue they are trying to fix since last week?
Last edited by djones on Tue Feb 26, 2019 10:25 am, edited 1 time in total.
Top

Maybe they wanted to try both endplate concepts and didn't have the current A spec ready? Running the beta spec of last week gave them another week of research and development time... Let's see if they got another upgrade for melbourne in the pipeline.
Top 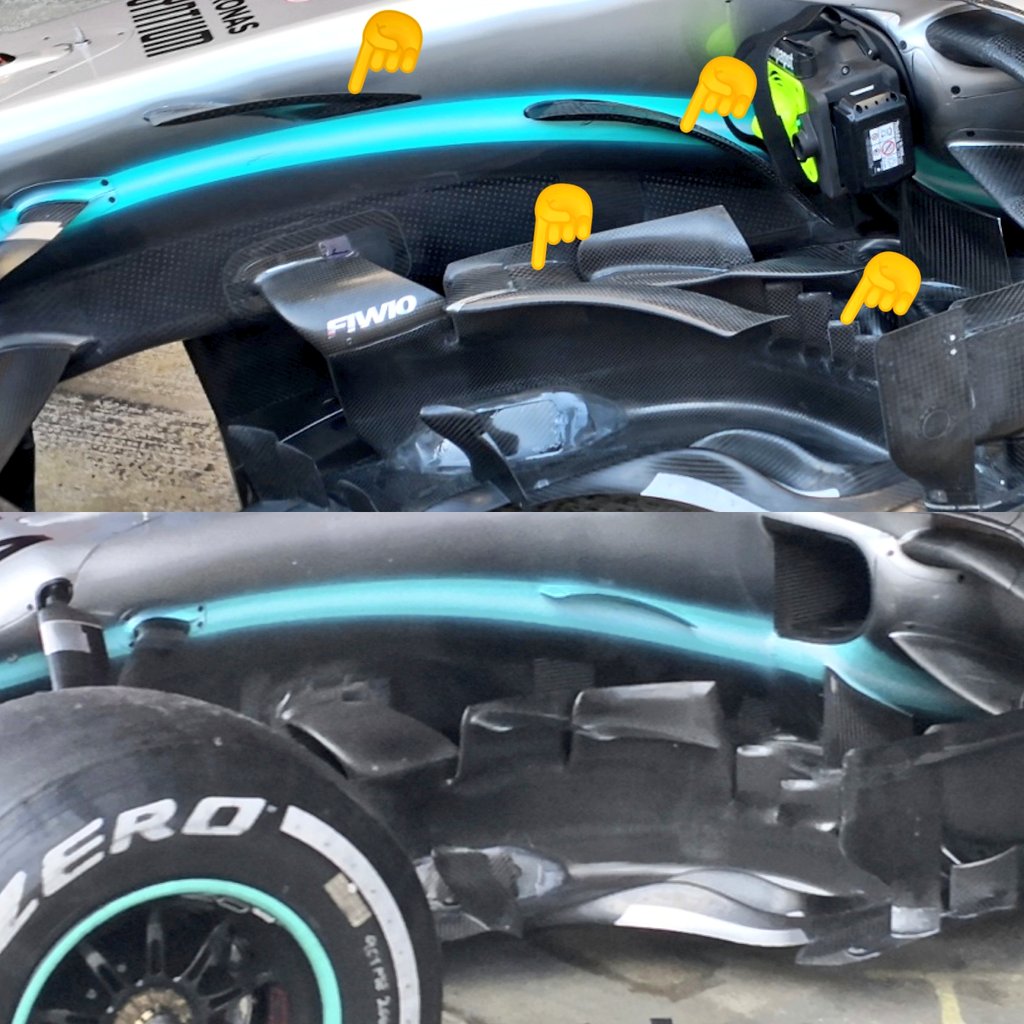 There's no way Williams could ever compete with that. The only way they'll win is if there's a massive budget cap or they luck in on a concept that is difficult to see/copy and allows them to jump ahead at the start of a season. Neither is likely, of course.
Turbo says "Dumpster sounds so much more classy. It's the diamond of the cesspools." oh, and "The Dutch fans are drunk. Maybe"
Top

That update is quite amazing!

If last week's car and this week's car were side to side with zero branding or identifying colour scheme you'd be hard pressed to conclude they were the same team's car.

Last week's car looks dated already like it was the car that finished last season. that's how big the step is.
Top

The engineering in this car is just stunning. It's a work of art. I feel if they get their problems sorted it will be a rocket ship.
Top

This could be a hilarious suggestion but imagine if last week's car was what they came up with at the start of the new regulations, when they lost all the performance, and they wanted to validate they have gone on the right direction so what we see now is the actual developed car. Maybe 1.5sec quicker. That would be pretty hilarious. Toto could have been fooling everyone.
Top

Mercedes have kicked off the second week of testing at Circuit de Catalunya, Barcelona by adding a new front end to their W10. Having struggled with front end grip during the first 4 days of testing, the upgrades will come as a welcome addition to Lewis Hamilton and Valtteri Bottas.

As another evolutionary step in Mercedes unique thin nose cone, the team have further narrowed the nose and added some sculpting to improve airflow underneath and over the nose cape that managed airflow underneath and behind the nose. Last year, Mercedes already extended the leading edges of that cape further forward, while this step integrates the entire concept better into the shape of the nose.

In addition to the development of the nose, the team have also added a new front wing, which drops its unique inwash endplates. The team were the only ones to have this design, in what was obviously an early development step just to enable reliability testing.

The new wing has endplates that angle outward, including a cutout at the top to help airflow from the wing to flush over the endplate and around the front wheels. The flaps of the wing meanwhile have mainly changed in the outboard area, converging more towards {Renault}'s solution where the outside drops off to enhance the outwash.

Still, it's a long way apart from the concepts run by {Ferrari}, Alfa Romeo and {Toro Rosso}. Oh no it doesn't work like that guys. Hold on.

No matter the resources, the pieces come in batches and are planned well ahead.

The first batch (last week's car) was probably developed a few months ago, they've put the pieces and tried them, run different programs to correlate the data.

The second batch (this week's car) was probably developed just recently, and my guess is that it wasn't fully ready a week ago.

And btw, Hamilton cut the chicane, that's why it was 1.5 faster, so chill.
Wroom wroom
Top
2224 posts