Of course, that is the issue with using GT3 cars. But I think it will be better, explained below.
The commercial part looks like usual business bullshit: The Class1 series was expensive, marketing costs high...and the big issue is it was a project on its own...so the project got a red light in the companies. DTM project closed at Merc, BMW and Audi.

This now opens up the possibility to fund the DTM again by the car manufacturers. It will run under simple general projects in marketing. How much money they invest is uninteresting, the exposure is much less than the old DTM project.

I don't know...in principle that was already the Class1 regulations and the cars had nothing to do with road cars. It was in some years after F1 the most expensive racing series in the world. But every second year there was a car/regulation that leaded to domination.
I think the great racing came from the low aero, stable cars and professional drivers going all in in a sprint race. We had this in the last years with the reduced aero in DTM...unfortunately BMW was not strong enough but the wheel to wheel racing was excellent.
Now I hope for the same with the GT3 cars. We have many teams from different manufacturers, so no stupid team orders all the time and we have cars that can have contact without breaking. Driver lineup also might be extremely good, I really hope for some of the old sprint specialists, not the long range drivers from the GT3 series.
Top

Any chance they develop a GT3 Sprintracer for 2022? Aren’t there not more classes that would prefer a sprint version of a GT3?
Top

Why? What do you have in mind as technical changes?
They have a BoP, so any benefit of a sprint version would be most probably killed by the BoP....so I struggle with the idea in terms of what may help in such a version.

I think this year will go to Merc. It is the only factory assisted brand with a recent car, that they already fully understand.
RedBull with the new Ferrari is a big unknown....not many cars, might be struggling under the amount of Mercs. Currently I count 6 vs. 2 with no DTM experienced drivers on the Bulls.
If Porsche would commit itself their new 911 could also play a big role, but I fear that the new car without factory support will be too difficult for the teams.
In 2022 BMW will come with the new M4. Should be also very interesting and maybe the point you mention....they could already shift some of their past DTM experience into the new car.
Top

Well, thanks for the news @Morteza! 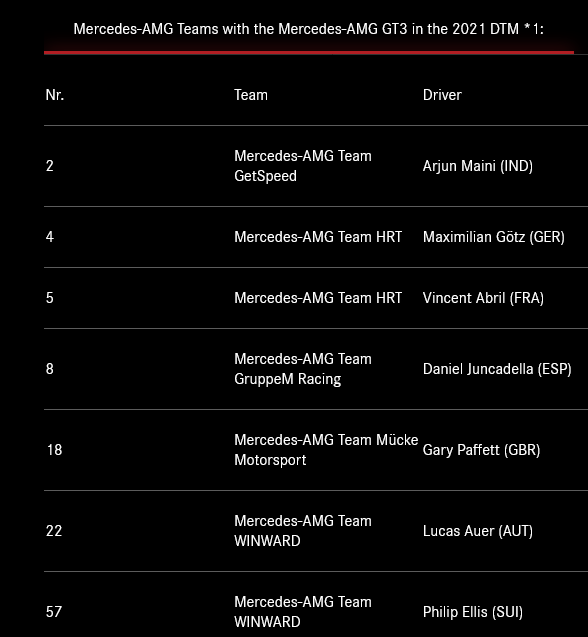 Albon overtaking a Mercedes at Red Bull Ring. I mean what can go wrong?

Those camera angles are so good by the way

Shameful how they *ucked everyone with the BOP apart from the Ferraris to allow Lawson two wins in order to artificially make the championship tight again.

This came out of nowhere, but that last race was so crazy!

What a disgraceful way to win a championship. By the way Lucas Auer is related to Gerhard Berger the Chief of the DTM.
Top

The season got the farcical conclusion it deserved tbh - they never got the BOP right, the penalties were all over the place, they never addressed the massive advantage Mercedes and Ferrari had at the stops - so P2 in the overall standings serving P1 some of his own medicine only to get a tyre slit by P3 who would then go on to win the race from a 12s gap is the shtshow the DTM really is in a nutshell.
Top

So basically the contender who survived the race won the championship, because two other cars were given team orders, even though they weren't in the same team as the winner.

A sad race and a sad outcome to be honest.
Top
56 posts